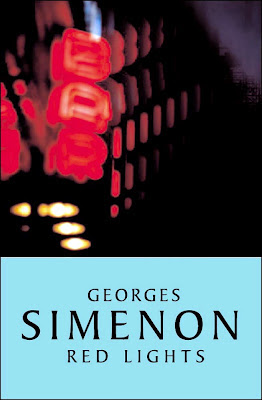 I recall reading and enjoying some of the Inspector Maigret short stories in ELLERY QUEEN'S MYSTERY MAGAZINE back in the Sixties, when I was reading EQMM regularly. But those were the only things by Georges Simenon that I'd read. So when it was decided to have a Simenon week in the Forgotten Books series, I dug out a couple of Maigret novels I had on hand and figured I'd read one of them.
Well, funny thing. I started both books and didn't like either of them. Maybe it had something to do with the translation, always a concern when reading a book written in another language, but I found both of them bland and uninteresting. So I was about ready to give up on having a Simenon post this week, when I remembered that I also had a copy of a stand-alone novel by him called RED LIGHTS. I gave it a try, and this turned out to be a different story indeed.
At the beginning of RED LIGHTS, Simenon seems to be channeling Cornell Woolrich. The protagonist, Steve Hogan, works in an office in , as does his wife. They live on with their two children, who are away at summer camp. As Labor Day weekend starts, Steve and his wife start to drive to to retrieve the kids. But along the way they get into an argument because Steve drinks a little too much and feels trapped by his life, and after he stops at a bar along the way for a quick drink, when he comes back out to the car his wife is gone. And oh, what was that news flash on the radio about an escaped convict in the area . . .?
You may think you know where this is all going, but after that Woolrichian opening Simenon veers off into mostly different territory. Some things turn out about like you'd expect, and others don't. The book is well-written, and Steve is a compelling, if not very likable, protagonist. The pace is a little leisurely at times, but I still got through the novel quickly. It's fairly short, as most of Simenon's books appear to be. I remember reading that he wrote most of his books in about a week's time. That sounds about right. There are eight chapters in RED LIGHTS, and I can easily imagine him writing a chapter a day until he was done.
This is a pretty good book, although it's not going to make me rush out and read more Simenon. It bothers me that I didn't like those Maigret novels, since I had good memories of the stories I read. I may try them again one of these days.
Posted by James Reasoner at 6:00 AM

I tend to prefer Simenon's "hard" novels to his Maigret books which, as is the case with many book series, can end up being too formulaic. Simenon lived in the United States for about a decade and he wrote some of what in my opinion is his most interesting work in that period. I particularly like his novel "The Watchmaker of Everton" which was published in English as a standalone (and with a different title, The Clockmaker) and as part of a collection called American Omnibus, which includes three other of his "American" novels. His style, particularly in the "Watchmaker", reminds me of James M. Cain. Here's an old NY Times review of American Omnibus: http://www.nytimes.com/books/97/08/10/reviews/simenon-omnibus.html

James, this is exactly the Simenon I was going to review as I read it recently too. But in the end I decided to go with short stories instead. His American books (written in the post-WWII years he was living here) seem to me to have a slightly different tone than his French-set ones. I wouldn't call it great but it was certainly readable.

Interesting that you too had a problem finding a Simneon book you liked. Took me three tries too! But as for RED LIGHTS: This was made into an excellent movie. It's available on a US DVD in a subtitled English version highly recommend it now that you've read the book which has been around for a while. Chances are most people don't know it under the "first" English language title. It was published by Signet back in the 50s as title THE HITCH-HIKER.

This made a wonderful movie but they changed the setting back to Paris.

RED LIGHTS is one of my favorite Simenon novels. Simenon captures the randomness of life in what could have been a Gold Medal sized novel.

I, too, read a Maigret many years ago and didn't like it. That was my last experience with Simenon's books.