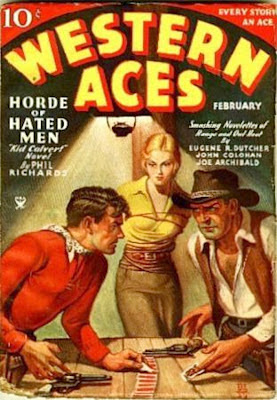 WESTERN ACES and its companion title from Ace Publishing, WESTERN TRAILS, were considered lower-tier markets, but I've got to tell you, I've enjoyed every issue I've read of those titles. I haven't read this one, nor do I own a copy, but it looks like a good one. A Preacher Devlin story by L.L. Foreman, stories by prolific pulpsters Joe Archibald and John Colohan, and a Kid Calvert novel by Phil Richards. (I'll admit, I'm not familiar with either Kid Calvert or his chronicler, Phil Richards.) And yes, that's a bondage cover, and I'm could probably increase the blog's traffic by noting that in the post title, but I'm not going to.)
Posted by James Reasoner at 7:00 AM

I'm so used to reading the Preacher Devlin stories by Foreman in WESTERN STORY, that I forgot just how many he did for WESTERN ACES. The Fiction Mags Index lists around 30 stories in WESTERN ACES before the series was switched over to WESTERN STORY.

The ADVENTURE HOUSE INDEX TO THE PULPS lists 106 issues for WESTERN ACES before it ceased publication in 1949.