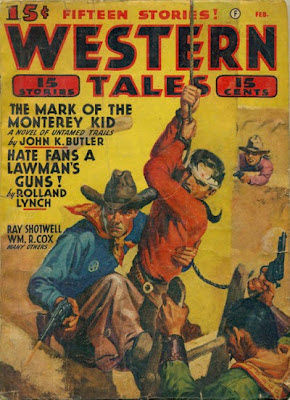 This is certainly an action-packed cover, and behind it is a particularly strong group of authors, starting off with John K. Butler, who wrote some great hardboiled mystery yarns for the pulps as well as scripting some of the better Roy Rogers movies. Also on hand are pulp stalwarts Peter Dawson, Ray Nafziger, Philip Ketchum, Tom W. Blackburn, William R. Cox, and Rolland Lynch. There's also a story by Wilfred McCormick, who went on to become a popular author of boy's sports novels, and one by David Crewe, a house-name used sometimes by David Goodis, although this story probably isn't by Goodis. This was the final issue of this magazine under this title. With the next issue it became 15 WESTERN TALES.
Posted by James Reasoner at 7:00 AM

Popular Publications certain had a good group of western titles, the best ones being their top seller magazines: STAR WESTERN and DIME WESTERN.

But FIFTEEN WESTERN TALES was also good and was published under Popular's lower paying Fictioneers,Inc. label. It lasted 117 issues from 1941 through 1955. They tried to revive sales in August 1955 by going to bedsheet size, 81/2 by 11 inches but to no avail. The last issue was Dec 1955 and the pulp era was just about over.

Westerns really never caught on with the digest fiction magazines. SF and crime digests sold well but the only western titles were ZANE GREY and a couple smaller run titles like GUNSMOKE.

I've never understood why the Westerns didn't catch on in the digest format. Western pulps certainly outsold the SF pulps, and they may have outsold the detective pulps as well. I would have thought that the audience would follow them to the digests.

The western still seemed to be king of the paperback novel market of the 1950's maybe the western writers of the time just wrote more novels than short fiction?

I think the western short fiction market which the digests represented around the middle fifties, took a big hit from the TV western.

By the mid and late fifties, western short fiction fans switched over to the half hour and hourly westerns that ruled the TV airwaves back then.

Instead of reading a short story they wanted to watch the series shoot 'em ups on TV. This continued right into the 1970's when the westerns finally reached the saturation point with viewers and burnt out on TV. Now you see very few western series on TV.

The longer western novels remained popular during this period probably because of the longer length. But I believe the TV western series replaced the short story westerns.

You may well be right, Walker. Of course, there were a lot of hardboiled private eye and cop shows on TV then, too, but MANHUNT was at its height, along with several other crime digests. However, I know that the crossover audience, people who read mysteries, Westerns, SF, and some of everything else, is a fairly small percentage of the respective audience for each of those genres, and that was probably true in the Fifties as well. Hard to predict what one genre's readership will do based on another genre's readership.

Well, not only did television steal some of the readers, it also stole the writers, including at least two of them in this issue of Western Tales, Bill Cox and Tom Blackburn. Later, as the markets evolved, both Box and Blackburn went to work on western series in the paperback originals. Sound familiar, James?