I have one new e-book book to mention this week. BRUCE MINNEY: THE MAN WHO PAINTED EVERYTHING by Thomas Ziegler is a biography of artist Bruce Minney, who was a prolific contributor to a number of pop culture venues, including covers and interior illustrations for men's adventure magazines as well as paperback covers. I'll have a review of this book coming up later in the week.

I picked up two new print books, SUSANNA'S CHOICE and CLAIMING THE HEART, a couple of Western historical romances by "Sara Luck", who is really a husband-and-wife writing team I know, and some of you do, too. (Don't misunderstand me, I'm not hinting that these are by me and Livia. They're not. Trust me, if they were, you'd know about it.) I don't read a lot of romances, but I expect these to be top-notch.

Speaking of romances, in the used book arena I came across a copy of a romantic suspense novel with a boxing background, KNOCKOUT by Erica Orloff. This is part of the old Silhouette Bombshell line, which published quite a few excellent books, and I couldn't pass this one up. I also got a copy of a Sidney Sheldon novel I haven't read, THE SANDS OF TIME, because, well, sometimes I'm in the mood for a Sidney Sheldon novel.

The rest of the used books this week are all Westerns, starting with two more books in the alternate history series about Wild Bill Hickok, YUMA BUSTOUT and BLACK HILLS HELLHOLE by Judd Cole, who is probably John Edward Ames. Then we have some more Buckskin books, the double edition RETURN FIRE/RIMFIRE REVENGE, both by Chet Cunningham writing as Kit Dalton, and a couple by Roy LeBeau, RECOIL and HANGFIRE HILL. I've been told that the author of these is actually Mitchell Smith, but I don't know if that's true. I've read a couple of the Roy LeBeau entries, and whoever wrote them, they were very good.

Moving on to a short-lived series I've never read, LOBO by Dennis Crafton, who was evidently really Dennis Crafton, judging by the copyright in the one I picked up, #2 COMANCHE DUEL. I don't know anything about this author or series and bought the book because the cover is by Bruce Minney, but I intend to read it.

THE DEVIL'S DOLLAR SIGN by Joe Millard is one of his original novels based on Clint Eastwood's Man With No Name character. Millard wrote a number of these after doing the novelizations of FOR A FEW DOLLARS MORE and THE GOOD, THE BAD, AND THE UGLY. I read FOR A FEW DOLLARS MORE when it was new and remember liking it a lot, but I've never read any of the original tie-in novels.

CUTLER: TIGER'S CHANCE by H.V. Elkin is another entry in the continuation of a series begun by Ben Haas under the John Benteen name, although again there's no mention of that in this book. It's listed on the cover and title page as #6 in the series. I didn't know there were that many, or if I did, I've forgotten it. 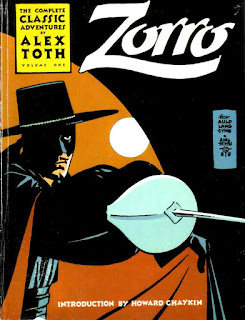 I also found a copy of ZORRO: THE COMPLETE CLASSIC ADVENTURES BY ALEX TOTH, which reprints comic book stories written and drawn by Toth in the Fifties, based on the Zorro TV show. This collection was published by Eclipse Comics in 1988. I like Toth's work a lot, and I like Zorro, and although this copy is a little beat up, it was on sale for a dollar, so there was no way I was leaving it in the store.
Posted by James Reasoner at 6:00 AM

According to Ames's website the Wild Bill books are all by him.

Hope you'll read and report back on the LOBO paperback, James. It's a new series to me, one I hadn't known about before. Checking the Internet, it looks like there were only two books, so if you're trying for a complete set, you're halfway there!

Steve,
There's actually a third Lobo book, but for some reason Pinnacle started renumbering the series with it. So there are two #1s and one #2, and one of the #1s is actually the final book in the series. Sometimes you have to wonder . . .

I just found a copy of Tiger's Chance by Elkin with a slightly different cover. It was also signed "H.V. Elkin" and "Vernon Hinkle". I have never read this author, but bought it because it is part of a John Benteen series, and it was cheap.