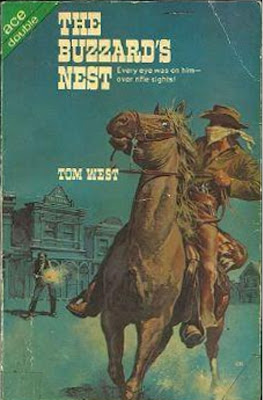 Since I had this Ace Double out a while back to look up some biographical info about Tom West (who was really an Englishman named Fred East), I went ahead and read his novel, the first thing I've read by him. The other side of the book is SIEGE AT HIGH MEADOW by Louis Trimble, which I read several years ago and is pretty good, IIRC.
Hardcase Bill Jordan finds himself mixed up in a scrape in a border town on the wrong side of the . When he helps a man escape from some vaqueros who want to knife him, winds up in possession of the deed to a quarter-section of land in . It's not just any small spread, however; the previous owner was a train robber who cached a quarter of a million dollars in stolen loot somewhere on it. After the robber's enemies catch up to him again and kill him, heads for to claim the land and locate the loot.
When he gets there, he finds that he's not the only one after the money, of course. There's an assortment of colorful, dangerous characters who want to get their meathooks on it, too. West packs a lot of action into a fairly short novel as and his new enemies--and some allies who may or not be trustworthy--vie for the treasure.
There are some nice characters in this book, though most of them don't have much depth. West has a nice touch when setting a scene, too. His descriptions are vivid without being overdone. His brisk, punchy writing style works well in the action scenes, but less so in dialogue, which is loaded down with more exclamation points than I've seen in a while. The twist ending is pretty predictable, but still reasonably entertaining.
I wouldn't run right out looking for more Tom West books, but I liked this one enough that I'll read more of his work, just probably not right away.
Posted by James Reasoner at 6:00 AM

I've read that the "Tom West" name was largely ghost written; a few are thought to be written by the zany and under appreciated Merle Constiner. Does anyone out there have any further information about who wrote the as by "Tom West" novels; or if Fred East wrote all of them?

Ben, I hadn't heard that, but it's certainly possible. Constiner was writing regularly for Ace at the same time a lot of those Tom West books were coming out. I can see Wollheim getting some of his other Western writers to pitch in and write "Tom West" books if there was a problem with Fred East, since the by-line was popular. This is the only one I've read, so I don't know yet about any stylistic inconsistencies. But I'll be keeping an eye out for them the next time I read one.