(This post appeared in somewhat different form on March 2, 2006.) 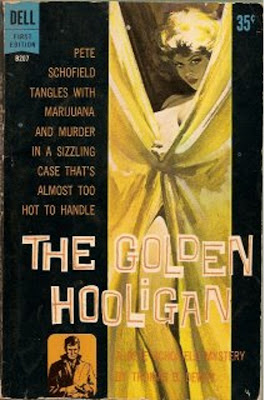 Thomas B. Dewey was one of my favorites when I first started reading PI fiction back in the Sixties, but I doubt if very many people today are familiar with his work.

Dewey was best known for a long series of novels about a private eye called Mac. The reader never learned the character's full name. But he also wrote another series about PI Pete Schofield, who was different from most fictional private eyes in the fact that he was married, to a gorgeous redhead named Jeannie who usually managed to get involved in helping Schofield solve his cases. (Shades of Mike Shayne and Phyllis! Those are wonderful books. But that's a different post . . .)

The fact that Schofield was married doesn't seem to have had much effect on how many beautiful women throw themselves at him in each book. It still happens with considerable regularity. He just turns them down and remains faithful to Jeannie, even when he winds up in bed with some nude lovely, as he does in this book. The plot involves a dead bullfighter and a drug-smuggling ring operating across the California/Mexico border, not that it matters a whole lot. The fun in this book -- and it's a lot of fun -- comes from Dewey's breezy style and the headlong pace of the story.

To a lot of modern readers of PI fiction, a book like this (from 1961) must seem almost as much of a relic as an Old Sleuth dime novel. THE GOLDEN HOOLIGAN certainly has its faults: the plot is maybe a little too simple, Schofield probably gets hit on the head and knocked out one too many times, and the frequency with which the female characters get naked seems pretty contrived at times. But I don't care. I grew up on this stuff, and I still love it.

One last note on Dewey: I've been told that he spent the last years of his life in , and continued to write books even though the market had changed and he could no longer sell them. Maybe they just weren't any good. But the thought of unpublished Dewey novels that are probably lost forever . . . well, it makes me shake my head in regret, that's for sure. But at least there are several of his published novels that I haven't gotten around to reading yet.
Posted by James Reasoner at 6:00 AM

Can't recall if I mentioned this the first time you posted the review, but Dewey was at one time the father-in-law and mentor of the late Barbara Burnett Smith. Believe they lived in Brady at the time. I wish Barbara had written down some of her memories of him.

Bill, you were my source for my comments about Dewey living out his last years in Texas. I thought it was Mason instead of Brady, but you're probably right about that. I always get those two towns confused since they're down in the same area.

I've not heard of Dewey before, but I'm going to have to check him out. While I could be wrong about this, I doubt his writing got worse. I suspect what the gatekeepers were buying changed. With the boom in small presses and self pubbing, there are a lot of titles that are selling well that the major publishers wouldn't touch. That very well may be the case here. Maybe someone will dust off those manuscripts and publish them.

His stuff would work well in the "Prologue" or "Stark House" list of titles.

I have a stack of Thomas Dewey paperbacks. He was one of the better authors writing about the PI type character for original paperback publication.

Who's left that still is writing about the series PI? Bill Pronzini with Nameless and Estleman with Amos Walker. Maybe James Reasoner and Bill Crider and a couple others?

Anyone who hasn't read Dewey should run out and get the Mac books.

I agree it would be great to see the Mac books come out in eBook editions from Prologue --- I filled out my Joe Puma, Ed Rivers, and Manny Moon collections via Prologue and adding Mac to the list would be terrific ...
Who's left still writing a series PI these days? Er, if I may toot my horn a bit --- my guy Joe Hannibal will be celebrating his thirtieth year in print this fall. A new novel, BLADE OF THE TIGER, and hopefully a short story collection will be coming out later this year. Plus all the back titles are now available on Kindle ... I'm naturally a little biased, but I think any reader could do worse than to check them out.

Wayne, are your books available on the Nook and which one should I start with?