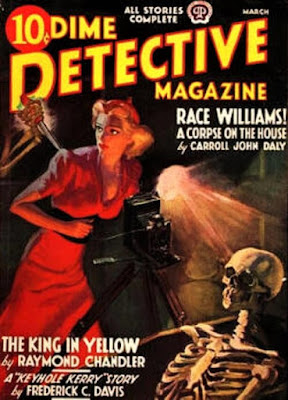 For the last pulp cover post of the year, we have a dandy cover by Walter Baumhofer on one of the iconic pulp magazines, DIME DETECTIVE. Inside this issue, there's a Race Williams story by Carroll John Daly, Raymond Chandler's "The King in Yellow", a Keyhole Kerry story by Frederick C. Davis, and stories by a couple of lesser known writers, William Edward Hayes and Maxwell Hawkins. Baumhofer, Chandler, Daly, and Davis are more than reason enough to think this was a great issue of DIME DETECTIVE.
Posted by James Reasoner at 6:00 AM

I have quite a few Dime Detective including some from the 1930's but not this one darn it.

I've somehow managed to hang onto a couple of DIME DETECTIVE issues with novelettes by John D. MacDonald. I used to have the one featuring Cornell Woolrich's "Kiss of the Cobra" as the cover story. All were bought from Richard Minter, way back in the day. I sold or traded off the Woolrich issue years ago, in a stroke of bad judgment.

Richard Minter was the greatest of the mail order pulp dealers. For over ten years he kept a steady stream of packages flowing into my house. Every week I would receive more than one package, all wrapped in brown paper with string and covered with old stamps from the forties and fifties. Someone had paid him off in old postage stamps.

He could find just about any pulp that you wanted because he had so many contacts with the old time pulp collectors. Whatever title I threw at him, he would come up with the goods. And he was inexpensive also. His main mail order years were the fifties, sixties and seventies. In the eighties he started to slack off and eventually retired.

RHM was great. He was selling via mail in the 1940's. Sometimes a copy of Amazing would appear with his comments on specific stories. Visited him in Eden, NC once.

I never had any dealings with Richard Minter, but I've heard a lot about him. The first mail order pulp dealer I bought from was Jack Deveny. Those who have grown up with the Internet don't know what a thrill it was to get one of those pulp catalogs in the mail and know that there were people out there actually interested in the same stuff I was. I'll never forget the excitement of browsing through those catalogs and then calling Jack to order some pulps, hoping that nobody had already beat me to the ones I wanted! Good days. I wouldn't go back to them, but still . . . good days.