Overlooked Movies: A Pistol for Ringo (1965) 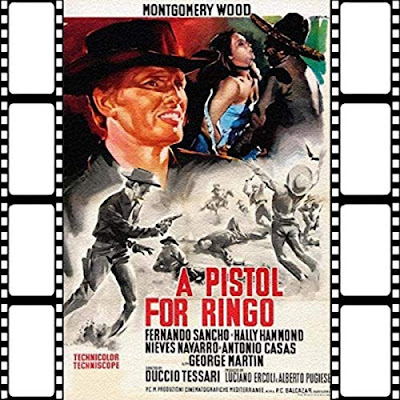 I had a hunch that this was the first Spaghetti Western I ever saw, and when I watched it again recently, I was sure of that because I remember some of it vividly and know that I watched it the first time at my sister's house in 1969 or '70, years that I spent a lot of time there.

But that bit of nostalgia aside, A PISTOL FOR RINGO is a pretty darned good movie. It was made when the Italians were just starting to make Westerns and is a little closer to American Westerns in its look and attitude. Giuliano Gemma (billed as "Montgomery Wood") is a gunfighter named Ringo who is recruited to infiltrate a gang of bank robbers when the outlaws take over a hacienda and hold the owner and his beautiful daughter hostage. It's a fairly simple plot, but there are a few twists and turns and double-crosses in the script by director Duccio Tessari, and after a while it's a little difficult to figure out whose side Ringo is really on.

The action scenes are consistently good, the scenery is spectacular, and the music is Ennio Morricone, so you know it's top-notch. Gemma is a handsome, athletic, likable hero, and Nieves Navarro, playing a female outlaw named Dolores, is just gorgeous. All the bad guys are suitably despicable.

You might not think so, but A PISTOL FOR RINGO is actually a Christmas movie, as the characters mention frequently. Some of the Christmas decorations at the hacienda actually play a significant role in one of the action scenes. It's not IT'S A WONDERFUL LIFE or MIRACLE ON 34TH STREET, by any means, but if you want some offbeat Christmas viewing, you could do worse. I enjoyed it quite a bit, and I'm glad to have seen A PISTOL FOR RINGO again after 50 years.
Posted by James Reasoner at 4:00 AM

Have not seen it but read of it. The second Ringo movie (same cast, different story so not a sequel, same director) makes a lot of top 10 lists of spaghetti westerns. Must find the time to watch it someday.

Apart from the two "Ringo" movies I suggest you watch "One Silver Dollar" directed by Giorgio ferroni in 1965.

To you and your family my best wishes of
Merry Christmas and Happy New Year.

ONE SILVER DOLLAR is on Amazon. I'll watch it! Thanks for the tip. I haven't seen that second Ringo movie, either, but it's there, too. Looks like I may go on a Guliano Gemma binge.

According to Bert Fridlund's "The Spaghetti Western", Gemma's westerns were amongst the highest grossing spaghetti movies in Europe when they were released. He was a genuine cowboy star in the sixties. His hero was Burt Lancaster. His movies don't have that familiar nihilism you find in most spaghetti westerns of the period. That makes them feel like Hollywood westerns of the fifties.
When he died, they played the Ringo theme at his funeral which was attended by huge crowds.