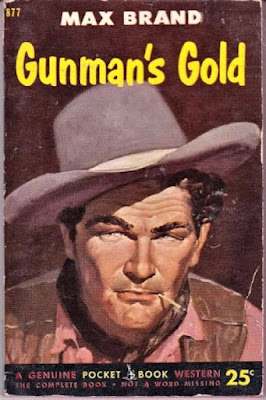 Several times a year, I get the urge to read a Max Brand novel. Frederick Faust, the man behind the Max Brand pseudonym (and many others), had such a distinctive style, really unlike that of anybody else who wrote Westerns, that I have to space them out. But by doing that, I nearly always enjoy his books quite a bit.

GUNMAN’S GOLD was published originally as an 8-part serial in the pulp WESTERN STORY MAGAZINE from April 22 to June 10, 1933, under the name John Frederick, one of those pseudonyms I mentioned earlier. Honestly, because of that distinctive style I mentioned, I have a hard time believing that readers of the time didn’t realize Max Brand, John Frederick, George Owen Baxter, Peter Henry Morland, and all the other Faust pen-names were really the same author. But maybe they didn’t, and the ones who did, didn’t care. Anyway, it was later reprinted in hardback by Dodd, Mead and went through numerous paperback reprints from various publishers, always under the Max Brand name.

Not surprisingly, considering the title, the plot revolves around the discovery of a fabulously valuable gold mine. The villain of the piece, an Easterner named Lee Swain who has come west, finds out about the strike, kills the two prospectors who discovered the gold, and frames the man who grubstaked them for their murders. Having done that, Swain figures he can get his hands on the mine, but first the man he framed has to be caught and lynched by a posse.

A wealthy old friend of the fugitive’s father gets wind of this and hires a freelance adventurer named Sam Shannigan to rescue the young man from this predicament and clear his name. Shannigan gets some help in this mission from a beautiful young woman who’s the daughter of his housekeeper and his unofficial ward. So, off they go to rescue the innocent lad, stay one step ahead of the posse, wear disguises, orchestrate jailbreaks, fall in and out of love, and figure out who really killed the two old prospectors, and why.

Faust sets all this up pretty quickly, and as a result we’re left with a book that’s a little thin on plot but that has a lot of action and character development. Shannigan is a good protagonist, not everybody turns out exactly as you might expect, and as always the writing is excellent, with Faust coming up with a lot of lines that make it clear why he considered his real calling to be as a poet, not a pulp writer. He was never very successful in that, but he left us with a lot of mighty good pulp yarns. I wouldn’t put GUNMAN’S GOLD in the top rank of his work, but it’s a solid second-tier yarn and I thoroughly enjoyed reading it. If you’re a Faust fan and haven’t read it yet, it’s worth picking up. Used copies of paperback reprints, print-on-demand editions, and e-book versions are readily available.

Hey James, any chance you might write up an infomral list of what you found to be some of Max Brand's top tier books?

Back when I was a buyer for Borders I accumulated a couple shelves full of Brand books (mostly those Leisure Book paperbacks) and every time I'm in the mood for the author's work I don't know where to start.

Silvertip. Can’t go wrong with Silvertip. Though my favorite was Smoking Mountains.

Looking back over the blog, I see that I've given good reviews to TRAILIN', IN THE HILLS OF MONTEREY, and THE STREAK. I agree with Spike that all the Silvertip books are good, although the first one is extremely weird. I recall liking TWENTY NOTCHES and GUNMAN'S RECKONING quite a bit. MONTANA RIDES! and MONTANA RIDES AGAIN are a little thin on plot but have plenty of action, action, action. His hardboiled mystery novel SEVEN FACES is very good. A lot of those Leisure paperbacks are collections of three novellas, so sampling some of them might be a good way to start. His style is so distinctive that sometimes I think it works best at novella length.

I've read DESTRY RIDES AGAIN, but it was more than 50 years ago so I don't recall what I thought of it. I've read that the movie doesn't really have much to do with the book other than the title and a few basic elements. I remember liking the movie, but it's been close to 50 years since I've seen it.