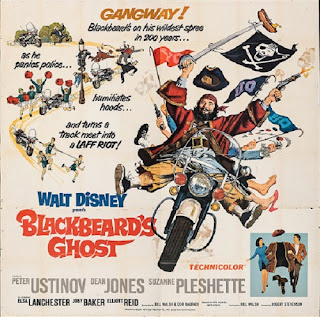 Regular readers of this blog may remember that when I was growing up, there was a drive-in movie theater about a quarter of a mile up the road, and I saw many movies there, going with my parents or older siblings when I was younger and then walking to the theater either by myself or with my friends after I was nine or ten years old. I saw plenty of Walt Disney movies there, including most of the ones that starred Dean Jones. But somehow I never saw BLACKBEARD’S GHOST, maybe because it came out in 1968, and somewhere along in there, the Eagle Drive-In changed ownership and became an adult theater, showing those dirty X-rated movies. That was the end of me going to the Eagle. (Of course, if you cut through the neighbor’s yard and went behind the Western Lodge Motel, you could see the screen fairly well from the woods back there . . . not that I would know from experience. That’s my story, anyway.)

But to get back to BLACKBEARD’S GHOST . . . Wanting something lightweight, we watched it recently, and I found it pretty entertaining. The plot is fairly typical Disney for that era: Dean Jones is the new track coach at a small college on the North Carolina coast, an area where Blackbeard the pirate was supposed to have met his death centuries earlier. He stays at a picturesque inn run by little old ladies supposedly descended from the pirates, the main one being Elsa Lanchester. Suzanne Pleshette is a professor and Jones’s romantic interest. The great Richard Deacon is the president of the college. Joby Baker, a pleasant character actor who showed up on TV a lot in those days (he played a bullfighter on THE DICK VAN DYKE SHOW and was one of the leads on GOOD MORNING, WORLD, a decent one-season sitcom about radio DJs) is somewhat miscast as the gangster who wants to take over the inn. Then Jones accidentally invokes an old magic spell that brings the ghost of Blackbeard back to life, but of course, he’s the only one who can see or hear the ghost. Hijinks and crude special effects ensue.

All this works only if the actor playing Blackbeard does a good job, and Peter Ustinov is great in the part, poignant at times but mostly chewing the scenery with a large amount of gusto. It’s not a great script—some of the jokes hold up, others don’t—but Ustinov throws himself into the proceedings with such enthusiasm that it’s impossible not to be entertained. Everything works out well, leaving the viewer with a warm, nostalgic feeling. At least, that’s the way it left me.

Now, I was sure I had told my Peter Ustinov story on the blog before, but I searched and don’t find any posts with his name in them, so as a bonus, here’s the tale of how I had a brush with celebrity. In 1975, parts of the movie LOGAN’S RUN were filmed at the Water Gardens in downtown Fort Worth, so my friend Bruce Washburn (Livia’s brother) and I decided to go down there one night and watch the filming. We’re walking along the street near the Water Gardens when this scruffy-looking old guy shuffles past me, a foot or so away. I didn’t pay much attention to him—there were a lot of homeless people who stayed around the Water Gardens in those days—but then a little while later, Bruce and I are standing at the top of the Water Gardens watching the scene they’re shooting down at the bottom, and sure enough, that same scruffy-looking guy shuffles out and starts acting. Yep, Peter Ustinov his own self.

I also almost bumped into Steve McQueen (literally) when he was filming THE GETAWAY in San Marcos, Texas, when I was going to college there at Southwest Texas State University, and I walked past Ben Johnson at the Fort Worth Fat Stock Show & Rodeo. Didn’t speak to either of them. I probably should have, but people like that get bothered all the time. I figure sometimes it’s best just to leave ‘em alone.

Steve McQueen and Ben Johnson? Cool! We've seen many, many celebrities on the streets of New York over the years, starting with Woody Allen in the late '60s, and including Kirk Douglas, Richard Thomas, Harry Belafonte, Nigel Havers, etc. Garbo used to be famous for walking around the streets of New York incognito. New Yorkers know, as a rule, to leave famous people alone. Still, it is very cool to recognize someone (both Douglas and Havers were quite short) famous.

Great story. I remember seeing Blackbeard's Ghost when I was a kid. I should see if it's on Disney+.

To tie back to the previous post. Poor old Frank Long was a regular at Peter McManus bar in Chelsea in mid 1980s.Would hang out with a couple of other old timers. I never bothered him but wish I had at least said hi (a bartender knowing my horror interest pointed him out to me). Later read what desperate straits he was in and felt really bad for him.

John Kennedy Jr., some brash comedian and Rickey Henderson were a few of my other sightings there.

Here in Southern California we see celebrities ‘out in the wild’ quite often. I’m with you, James — I try not to bother them, figure it has to be a bit irritating after a while to have people gushing at you when you’re just out shopping or whatever.

There’s a funny story about Lauren Bacall — she was out walking in Manhattan, someone yelled ‘LAUREN BACALL!’ at her from across the street, and she calmly flipped the guy off without turning her head or breaking stride. You go, Betty :)

I saw BLACKBEARD’S GHOST in the theatre way back when, too. I remember liking it — and looking up ‘Pirates’ in the World Book Encyclopedia afterwards — but not much else.

We saw Katharine Hepburn in the theater several times - in the audience, that is, not on stage. She had a reputation of giving off a "Leave Me Alone!" vibe, and we always did. One time, however, we were in Bath, England at the Museum of Costume (now the Fashion Museum), and as we were walking out, who was walking in but...Katharine Hepburn! As Dave Barry would say, I swar I am not making this up. My wife went nuts and carried on for a good while, about WTF was Katharine Hepburn doing at the Costume Museum in Bath, of all places. I did NOT let her say anything, just held the door for her.

When my wife's enthusiasm gets the better of her, it can get embarrassing, as when we saw Richard Thomas near Lincoln Center (many years ago, when his triplets were young, so early 1980s). She couldn't control herself from yelling out, "John Boy!"

Last year at the Bouchercon in Dallas, Livia and I were up early one morning and were walking through the hotel lobby about 6 a.m. I looked over at some chairs we passed, and sitting by himself reading the newspaper was James Patterson. I thought about going over and introducing myself, but I figure a guy like that has people hanging around him all the time, and he just looked so blasted peaceful . . . Anyway, we walked on.