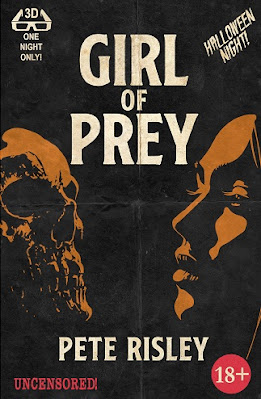 It’s Halloween weekend in the late 90s and a movie theater is hosting a horror movie marathon in shabby Stankerton, Ohio. The town is plagued by a serial killer, the Westside Slasher. A new recreational drug called worm is gaining in popularity and a strange, beautiful girl from California is found wandering around a rock club stoned and alone. A vague image appears on an outside wall of the theater, taken by some to be a manifestation of Christ. And a bizarre confluence of religious cultism from faraway times and places seems to arise phantom-like in Stankerton, threatening to drive a few desperate souls over the edges that define them.

There's so much going on in this dark suspense novel that I wasn't sure I could summarize it adequately, so we'll let the Amazon sales copy do that. What I'll say is that Pete Risley does a great job with the Nineties setting and keeps the story racing along at a fast pace while juggling a large cast of characters. That's not easy to do, but he succeeds admirably. This is some good Halloween reading (that's when it comes out), although it is, as they say, not for the squeamish. But if you don't mind your fiction a little on the raw side, GIRL OF PREY is an excellent novel.