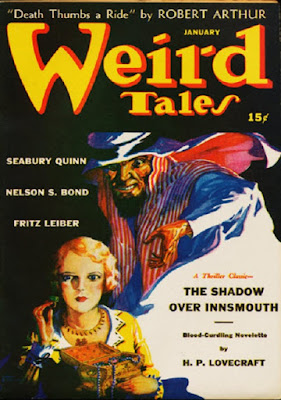 Okay, now, this is a terrific story. “The Shadow Over Innsmouth” is the best Lovecraft yarn I’ve read so far, by far. It’s the tale of a bookish young man who’s making a tour of New England towns between his junior and senior years in college, so he can study their history and architecture. He winds up in the decaying fishing town of Innsmouth, Massachusetts, even though he’s been warned against going there because the inhabitants are, well, strange. Turns out, that’s putting it mildly.

After complaining about the slow pace and lack of dialogue in other Lovecraft stories, this one is much different. It still doesn’t just race along, but it moves fairly well, there’s a lot of dialogue, and Lovecraft actually shows us most of the action instead of just summarizing it, achieving some real suspense along the way. And then at the end, there’s a twist that’s a real gut punch.

“The Shadow Over Innsmouth” was published originally as a stand-alone novella by some outfit called Visionary Press in 1936, then reprinted in the January 1942 issue of WEIRD TALES. I’m sure those of you who are more familiar with Lovecraft and his career than I am know a lot more about the origins of this tale than I do, and if you’d like to weigh in in the comments, please do. I’m going to settle for saying that this is a wonderful yarn, and I have a feeling it’s going to stick with me. I kind of wish I’d read this sitting on my parents’ front porch in the summer of 1967 or ’68 . . .

I will look this one up, thank you for the recommendation!

I just finished watching LOVECRAFT COUNTRY on HBO so "The Shadow Over Innsmouth" brings back a lot of memories. I read Lovecraft back in the 1960s and reread many of the stories over the decades. Now, there's a cottage industry of Lovecraft pastiches. I have a LOVECRAFT WEEK on my blog a couple times a year when the piles of pastiches force me to binge-read them.

This was the lead story in the turn of the '70s Scholastic collection of Lovecraft which was the first book of his work I attempted...and his writing style has never done as much for me as many of his acolytes', certainly his first greatest ones, Robert Bloch and Fritz Leiber, for example--as they took his existential horror ball and ran with it, in several high-scoring directions. But given how his inspiration keeps giving, as with the next generation's Ramsey Campbell and Fred Chappell, and the next yet's Thomas Ligotti and T. E. D. Klein, it's hard to kick too hard.

You can see in the letters between Lovecraft and Robert E. Howard how they influenced each other. While Howard used some of the Cthulhu Mythos, I believe this story shows Lovecraft picking up the pace & action due to Howard's influence.

James, Stuart Gordon's 2001 movie DAGON is mostly based on "The Shadow over Innsmouth," and even though it switches the setting to coastal Spain, it does a pretty good job of capturing Lovecraft's aura of dilapidation and decay. And it tosses in a Really Big Monster, Dagon, to boot. I read the story in high school thanks to the kind folks at the county library, who reserved a copy of the Arkham House collection, THE DUNWICH HORROR & OTHERS, for me through inter-library loan. ILL was also my source, a few months later, for SKULL-FACE & OTHERS, in those days before you could find Lovecraft and Howard in plentiful mass-market editions.