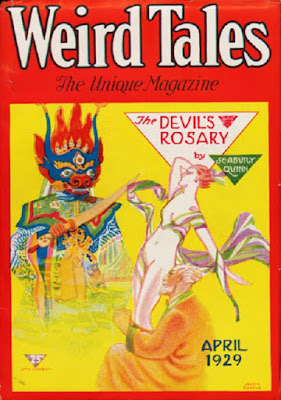 I know when I'm beaten. After reading "The Shadow Over Innsmouth" and now this story, I have to take hat in hand and humbly say that yes, yes, I am an H.P. Lovecraft fan. I have been won over.

"The Dunwich Horror", which appeared originally in the April 1929 issue of WEIRD TALES, takes place around a farming community in Massachusetts, in an area where the hills have ancient stone circles atop them and some of the folks who live thereabouts have strange habits, like the Whately family, especially young Wilbur Whately, who is born and grows up in the course of this story but grows up to be something other than human . . . and that's just the beginning of the weird, potentially cataclysmic things that happen.

Once again, Lovecraft injects some dialogue and action into this yarn to go along with the all the richly detailed creepy stuff. The climax is downright thrilling. Not only that, but there are also a few unexpected (at least by me) touches of humor in this story. Granted, the lines are more droll than they are laugh-out-loud funny, but still, I'll give Lovecraft credit for making me smile.

I know I said I might continue with this series after Halloween, but I believe I've changed my mind. Honestly, as much as I've enjoyed the tales, I'm about Cthulhu-ed out. I'm sure I'll return to the series, and to other horror stories, in the future, and right now I'm planning to make a whole month of it again for Halloween next year. I'll have one more horror-related post tomorrow (not Lovecraft or Cthulhu), and after that I plan to go back to reading Westerns and mysteries for a while.

I just finished reading the first issue of Startling Mystery Stories, with lots of Weird Tales reprints--Derleth, Quinn, Bloch, Hoch, and even Poe. Wonderful stories including Lovecraft's The Lurking Fear--shades of Richard Shaver!

The Suspense radio show did an adaptation of this in the 1940s. I listened to it tonight on the Sirius/XM old time radio station while I was traveling out of town.

Lovecraft could be funny when he wanted to be. Herbert West, Re-Animator is pretty funny as I recall, which the 1980s movie picked up and ran with.