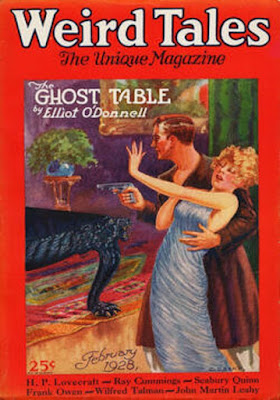 I decided to go ahead and read more of the Cthulhu Mythos stories, so why not go right to the source? H.P. Lovecraft’s “The Call of Cthulhu” was published in the February 1928 issue of WEIRD TALES and reprinted many times since. It’s a very impressive piece of inventiveness. In this one story, Lovecraft lays out the basis for a huge number of stories by many different authors: the Great Old Ones, vast cosmic beings that come from beyond the stars, landed on Earth in the planet’s infancy and are still alive, although dormant and hidden away in vanished cities, waiting to be called back to life by a cult of their devoted followers, at which time they will lay waste to humanity, or at least try to. Although not necessarily evil by their own standards—they’re beyond the concept of good and evil—to humans they represent the greatest horrors imaginable, or, in some cases, unimaginable.


“The Call of Cthulhu” itself is a good story, fast-moving by Lovecraft’s standards, in which the narrator investigates several related series of events that gradually reveal the terrible truth to him. One section of the story set in the Louisiana swamps and another on a mysterious South Seas island could have been really good adventure yarns if Lovecraft had done more than summarize them. Even at that, they’re pretty exciting, especially the climactic battle between a ship and the reborn Cthulhu.


This is a good example of why so many authors latched on to the Cthulhu Mythos and wrote their own stories set against that background. It’s such an epic concept, filled with the potential for drama, conflict, and action, that born yarn-spinners such as Robert E. Howard, Robert Bloch, Henry Kuttner, and many others, naturally would see the possibilities. From what I’ve read so far, it seems to me that Lovecraft’s stories function more as a series bible than as satisfying stories of their own (although I’m warming up to his style and see its appeal).

I’m going to continue reading these stories, including some of the other authors who wrote Mythos stories, and even though this started as a Halloween-related project, it’ll probably take me longer than that. So bear with me, even though many of you probably read all these stories years or even decades ago. They’re new to me.

Don’t get my criticism of Lovercraft wrong (I really enjoy his work and some, Innsmouth, is absolutely great) but you nailed it. The first time I read Call (as a kid), I was absolutely baffled at the “summary stories” that would have been great if expanded and on their own. Some authors today would make a career on just what Lovecraft jetted through in Call.

You can't go wrong with Cthulhu!

I have been meaning to read the Cthulhu Mythos stories for a long time. I have read so much about these stories.

It has been years since I've read these. Remember jumping from Robert E. Howard to Lovecraft.

And, as I've probably mentioned where some have seen, for me what was most important about Lovecraft's work was how much he emphasized what I tend to think of as existential horror, how it wasn't so much evil necessarily but indifferent creatures in an indifferent universe that might hold Evil Designs on the other characters, but mostly they were just either means to an end, or so much dust that might be in the pathway they want to tread. And how young acolytes Robert Bloch and Fritz Leiber particularly picked up that ball and ran with it, in much better prose and substituting their own hangups, of which they were apparently more self-aware, for HPL's...

I think ‘The Call of Cthulhu’ is an absolutely seminal work of Weird Fiction, and also a humdinger of a ‘yarn’ . Though I have to admit, the last time I read it (a year or so ago) I found the action-packed climax a little bit goofy — Cthulhu wading out into the surf, chasing the sailors, getting rammed by the ship, etc. I could almost picture it as one of those giant monster stories by Stan Lee and Jack Kirby in TALES TO ASTONISH...

My husband is an H.P. Lovecraft fan. He has two annotated volumes of stories and some Arkham editions. I should try something in one of his books. Although I have never been a fan of horror.