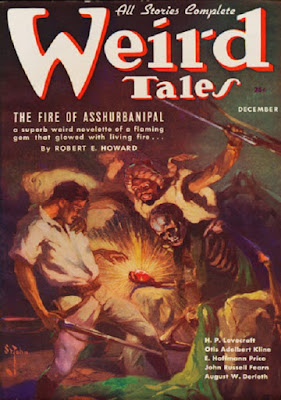 Now this is a yarn! One of my favorite Robert E. Howard stories, and one of my favorite WEIRD TALES covers, with art by the great J. Allen St. John. This story is considered part of the Cthulhu Mythos, and rightly so, but for most of its length it's a classic adventure tale with one of Howard's two-fisted American adventurers in the Middle East, Steve Clarney, who, along with his Afghan sidekick Yar Ali, ventures into the desert to find a lost city where a fantastic, mysterious gem known as the Fire of Asshurbanipal rests in the skeletal hand of a long-dead emperor. Along the way they have to battle Bedouin bandits and an Arab outlaw and slave-trader.

Well, even if you've never read this story (and I'll bet most of you have, some multiple times like me), you can guess that Steve and Yar Ali will find what they're looking for, and more besides, and it's that more that ties this yarn in with Cthulhu and his outfit. If I have one quibble with the story, it's that our heroes act more like Lovecraft protagonists in the end, rather Howard protagonists, but I can accept that in exchange for all the great stuff along the way. I reread this in the Del Rey edition THE HORROR STORIES OF ROBERT E. HOWARD and thought it held up just fine.

Great choice, James. Howard tends to keep the action going and so many of his tales are genuinely creepy.

I only have ten or twelve issues of Weird Tales from the classic era.
But this is one I do have, and it's in the best condition of the lot.
Occasionally I'll get it out and read a story, but each paper flake it sheds makes me feel like I'm destroying a relic.

It also has Lovecraft's 'Haunter of the Dark' (in which HPL kills Robert Bloch), Bloch's Mother of Serpents, and tales by August Derleth, Manly Wade Wellman and Henry Kuttner.
A fine issue of what seems to me to be the finest genre fiction magazine of all time.

I love this story, both as a Howard enthusiast, but also as a student of the Assyrian Empire. There was a marvellous exhibition in the British Museum dedicated to this awesome period of history recently, and there's some great statues to see in the permanent displays. Also, if you read the adventures the treasure hunters had transporting the colossal sculptures, it makes the early part of the story seem less fanciful.