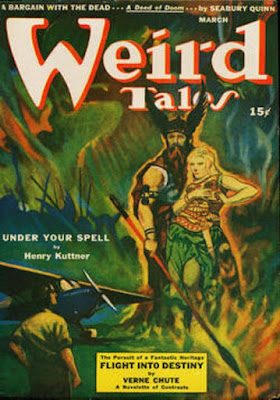 August Derleth’s short story “No Light for Uncle Henry” appeared in the March 1943 issue of WEIRD TALES. It was reprinted in a couple of Derleth collections, one from Arkham House and one from Battered Silicon Dispatch Box. It’s the first thing I’ve read by Derleth in quite a while, but I enjoyed it. It’s the story of a young man who goes to live with a bachelor uncle in a small Midwestern town. Another uncle had lived in the same house until recently, when he died. The surviving uncle gives the young protagonist strict instructions that no light is to be taken into the dead uncle’s former bedroom . . . but we wouldn’t have a story if the guy didn’t do exactly that, would we? What does he find when he steps into that deserted room and lights a match?

A sinister shadow cast on the wall, even though there’s nothing there.

I’m about as far from a scholar of Derleth’s work as you could find, but even without being that familiar with it, I get the feeling this is a pretty minor tale. The plot is fairly predictable, with the “twist” at the end not coming as much of a surprise. And yet, it’s a pretty entertaining yarn, a nice little slice of mild, rustic, Americana horror. I enjoyed it enough that I wouldn’t mind reading more by Derleth.

Most of Derleth's horror stories are light and minor, something which does not prevent them from being entertaining. Derleth is now best known for starting Arkham House and for promoting the work of H. P. Lovecraft, but much of his other work -- regional novels and short stories, the Solar Pons mysteries, the juveniles about The Mill Street investigators, his journals, and much of his poetry -- are all worth seeking out.

While I have not read this particular author, I have read several others also unknown to me in similar magazines of the early to mid-20th, and I always wonder who I should read.

For me it is all about creating an atmosphere with a ghost story. That can take me a long way.

“Light” sounds bad but I guess I would not call Derleth heavy. Very enjoyable horror reads. Mr. George, Logado’s Head (bad spelling I am sure) and Colonel Markesan come to mind as memorable years later. But all of his horror stuff is fine, never disappoints.

And I worry that Mr. George and Markesan are memorable because of my favorite TV horror series, Thriller. Lots of Weird Tales adaptions, including Weird Tailor. Karloff was wonderful as Markesan.

Spike,
I'll check out those stories.

THRILLER was a great series.

THRILLER, yes indeed.
Is there a better adaptation of REH on film than Pigeons From Hell?
All these years and I don't think so.

"Pigeons From Hell" is the best. Nothing else comes close.

I missed Battered Silicon Dispatch collection of Derleth's horror stories and am kicking myself. over it.

Absolutely “Pigeons from Hell” is the best. Chills even after multiple viewings. That is my favorite Thriller for certain. Another favorite is the stranded motorist couple (Tom Poston and the Bewitched lady?) going to the Pyscho House and being guests of John Carradine and his freaky family. Great ending makes you want to watch it again.

Markesan is great also, as are quite a few Robert Bloch adaptations.