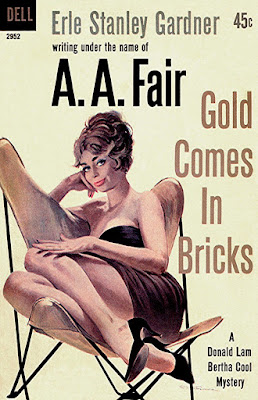 I’ve been in a bit of a reading funk lately. I’ve read a few good books, but for the past couple of months I’ve struggled to finish quite a few of the books I’ve read, and then when I finally did, I was disappointed in them. A few, I even wished I hadn’t wasted the time reading them.

So recently, I decided to grab a book off my shelves that I knew wouldn’t disappoint me: GOLD COMES IN BRICKS, the third Donald Lam/Bertha Cool novel, originally published in 1940 by William Morrow under the pseudonym A.A. Fair and reprinted in paperback many times since. It’s possible I’ve read this one before, but if I have, it was more than fifty years ago and I didn’t remember a thing about it, so it doesn’t really matter, does it? 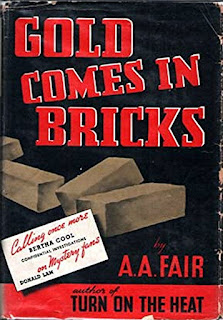 This one begins with Donald being hired to pretend to be a physical trainer for a rich man who wants to find out if his daughter is being blackmailed. The idea of Donald being a physical trainer is pretty amusing to Bertha, but she wants the fee so she orders Donald to take the job. In short order, complications pile upon complications. What else would you expect in a Gardner novel? In this one, we get a murdered gambler, legal shenanigans involving corporate taxes, a romantic South Seas cruise, more shenanigans involving dredging for gold, missing love letters that provide the motive for a second murder, and jujitsu lessons. For what it’s worth, I figured out who the killer was, but not until more than  halfway through the book and I didn’t have all the plot untangled. The murderer’s identity was at least partially a guess. Donald, as usual, was ‘way ahead of me. 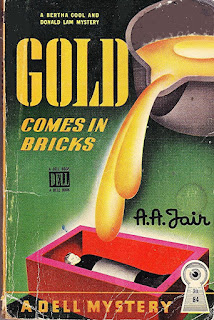 One reason (other than the fifty years that have passed) I don’t recall whether I’ve read this one before is the realization that the plots absolutely don’t matter in Gardner’s novels. Sure, they’re always complex and it’s a lot of fun to try to keep everything straight and maybe figure out the killer, but honestly, I pretty much forget the plot of most Gardner novels five minutes after I’ve read them. What keeps me coming back is simple: I love Donald Lam being a wise-ass and Bertha being a curmudgeonly skinflint and the camaraderie of Perry Mason, Della Street, and Paul Drake. I love the fast-paced dialogue and the breezy narrative and the humor (Gardner was a lot funnier than he’s usually given credit for). His books, especially the ones from the Thirties and Forties, have a really nice sense of time and place, too. Gardner has a reputation as not being a particularly good writer (Steve Mertz, if you’re reading this, what’s that Raymond Chandler quote about Gardner you once told me?), but he’s an absolutely wonderful storyteller.

And this book didn’t disappoint me at all and has restored my faith in fiction, at least for now. Quite an accomplishment for a 1940 mystery novel by a guy once known as the King of the Pulps, ain’t it?
Posted by James Reasoner at 6:00 AM

Absolutely spot on. I have re-read the Perry Mason series for the characters and their interaction, not the plots. Even the trial scenes are more fun for the dialogue and invariable send down of Hamilton Burger not the plot gimmicks. Gardner is a great read.

I never got around to reading A.A. Fair as much as I read Gardner, even though I'd access to the pseudonymous pocket paperbacks.

Glad to hear your take on working to follow Gardner’s plots vs. just spending time with his characters. I am with you.

This sounds absolutely delightful. I like the Fair books that Hard Case has been reprinting, I'll try to track this one down. I used to see them all the time, hitting myself for not springing for them when I had the opportunity.

As much as I like the Perry Mason books, the Lam and Cool books are also good, if only for the variation in them. I especially like how Lam and Cool are usually called in to investigate insurance fraud or some such minor thing, and it ends up involving murder or murders, with Donald right in the middle of it all.