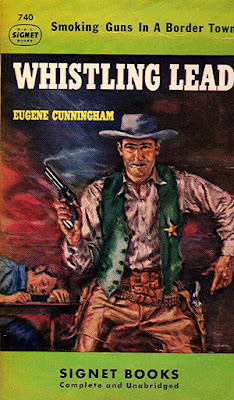 Eugene Cunningham is one of my favorite Western writers, but it had been a while since I read anything by him, so I decided to remedy that. WHISTLING LEAD was publlshed in hardcover by Houghton Mifflin in 1936 and reprinted in paperback by Signet in 1949, the edition I read. (A first printing, by the way.) It’s dedicated to John F. Byrne, an editor at Fiction House during the era when Cunningham was selling a great deal to the pulps they published. Some of his novels are cobbled together from pulp novellas and novelettes, but if that’s the case with WHISTLING LEAD, I haven’t found anything to indicate that. Although it’s pretty episodic, it reads as if it were written as a novel.

The plot is fairly simple: Arthur “Big” Gavity is a drifting cowhand who works for a Texas rancher. He falls in love with the rancher’s beautiful daughter, but the rancher opposes any such match. He’s also ambitious and wants to make his mark as a businessman, so in order to do that, and to get his daughter away from Gavity, he moves to La Fe, a cattletown that’s poised to become a boomtown because a railroad spur is being built to it. The problem is, Gavity quits his job on the ranch and follows them to La Fe.

This is actually back-story. The novel begins with Gavity on his way to La Fe and fills in the background as it goes along. Of course, as soon as Gavity arrives in the settlement, he runs into trouble, but he’s very handy with guns and his fists, and he soon comes to the attention of the mayor, who offers him the job of town marshal since the previous marshal was just shot down by a slick tinhorn gambler. Thinking that being a lawman might win him the favor of the father of the girl he loves, Gavity accepts . . . and not surprisingly, more trouble ensues as the bad element in town tries numerous times to get rid of him and he has to break up a gang of outlaws plaguing the area.

Cunningham has a distinctive—some might say eccentric—style that takes some getting used to, but once you get into the flow of the story, it’s very effective. The tone in this novel switches between breezy, light-hearted romantic comedy to brutal, bloody violence and tragedy with such regularity and swiftness that reading it is almost like watching a tennis match, the reader’s head jerks back and forth so much. With some writers, that would be very jarring, but Cunningham really makes it work. There’s nothing unusual about the plot, but as always, it’s how an author handles a traditional plot that makes it appealing. Cunningham does a fine job of that, and as a bonus, he writes great action scenes. 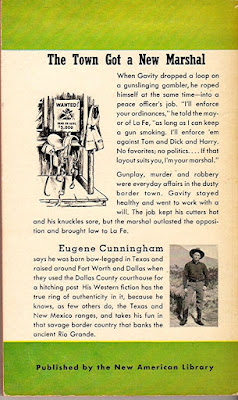 Although the story is a little fanciful, there’s an undeniable air of authenticity about Cunningham’s work. Like Walt Coburn, he was a working cowboy as a young man, and as you can tell from the photograph of him on the back cover of the paperback edition, he certainly looks the part. I’ve seen Cunningham compared to Dashiell Hammett, and there’s some merit to that theory. He was the first of the really hardboiled Western writers, and WHISTLING LEAD bears some resemblance to RED HARVEST, although I guess to some extent most “town tamer” Westerns do. It’s probably even more appropriate to compare him to Carroll John Daly, although I think Cunningham is a better writer than Daly (and Daly is better than he usually gets credit for).

At any rate, WHISTLING LEAD is an excellent novel, and since it’s not tied in with any of Cunningham’s other novels, it wouldn’t be a bad place to start if you haven’t read his books. I enjoyed it and think it’s well worth reading.
Posted by James Reasoner at 5:30 AM

You got me into Cunningham’s novels years ago and I'm appreciative. He's a top writer that knows how to keep a story moving. And this is one I have not read. Cool.

Same as David. This is one of the many writers you have introduced me to (to my personal benefit and my wallet’s detriment). I am reading a “Bannerman” now but want to read another Cunningham. Going to grab a copy of this.

What David and Spike said. I've been going to your blog first thing each morning, that first cup of mud in hand, for a good many years now, James. I don't know what I'd do without you and all the great pointers toward a whole world, or many worlds, of great reading. Thank you just doesn't cover it.

Same with me James. Your blog is my first stop in the morning, and your comments and reviews have introduced me to so many enjoyable books!

Thanks for all the years of fun.

Great title. Thanks for another fine recommendation.