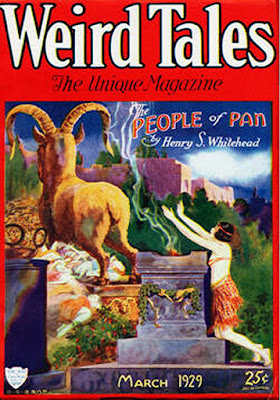 I’ve seen Frank Belknap Long’s name in books and magazines countless times over the decades, but I’ve read very little by him. The title of his story “The Hounds of Tindalos” sounded familiar to me, so I decided to give it a try. It was published originally in the March 1929 issue of WEIRD TALES, reprinted in the July 1937 issue of WT, in AVON FANTASY READER #16 in 1951, and in many collections and anthologies since then. I read it in THE CTHULHU MYTHOS MEGAPACK, an e-book anthology published by Wildside Press.

I’m not well versed enough in all the Mythos stuff to know exactly how “The Hounds of Tindalos” is connected to Lovecraft’s work, so I read it as I would any other yarn, looking to be entertained. And I was. It’s the tale of Frank Chalmers, a student of the occult who is convinced that through a combination of drugs and mathematics that he can see into both the past and the future. He enlists the aid of a friend of his, the narrator of the story, who is supposed to pull him out of his drug-induced trance if things start to go wrong.

Well, don’t things always go wrong in stories like this? There are things man was not meant to know, after all, and when you stare into the abyss, be careful that the abyss doesn’t stare back at you. (Hint: It always does.) So when Chalmers discovers cosmic horrors beyon his ken, those horrors discover him, as well, and decide to follow him back to our earth.

I can see where this is a Lovecraftian story, but Long spins his yarn with a lot more dialogue and narrative drive than the Lovecraft stories I’ve read so far, but also without the really creepy style at which Lovecraft was so skilled. As a result, “The Hounds of Tindalos” is faster and more fun but lacks some of the impact of Lovecraft’s tales. I enjoyed it quite a bit anyway and am glad I read it.

I do have a very indirect connection with Frank Belknap Long. In the Sixties and Seventies, he worked for Leo Margulies’ Renown Publications and was the associate editor of MIKE SHAYNE MYSTERY MAGAZINE for quite a while. Not while I was selling to MSMM, however. Sam Merwin Jr. came in to run the magazine a few years before I started submitting stories there, but if I’d gotten around to it a little earlier, I might have gotten rejection slips from Long, too.

On the other hand, instead of rejection slips, he might of sent you acceptance letters!

Unlikely at that point . . . but you never know!

I think it's interesting that you mentioned HPL's ability to set mood and atmosphere in your previous post and then in this one mention that while Long's story has more narrative drive, it doesn't have the same atmosphere as HPL. Can we really have both?

When I read HPL, I imagine an emaciated old uncle whispering in my ear, telling me that which I should not know. I love Long and Kuttner & Moore and Brackett and Howard for the stories they tell around the campfire.

I just don't think it's possible to have HPL's effects in normal pulp fantasy.

I keep telling myself to judge Lovecraft's stories based on what he chose to write, not how I think he should have written it. Clearly, he wrote exactly what he wanted to write, not really tailoring it to fit a market. So his work comes across as very authentic. All the other writers who turned out Mythos stories during the pulp era could and did write other types of stories. I get the feeling that they enjoyed writing Lovecraftian stories, but even so, that was just one more thing they could do in an attempt to get sales. The best they could do is approximate HPL's effects.

We've seen the exact same thing from other authors writing Conan stories in the past 50-some-odd years.

I say this as someone who has spent the great majority of my career writing about other people's characters and concepts. But at least some of those were designed from the start to be written by multiple authors.

Hey James, I wonder how you'd feel about Robert Bloch's mythos tale, 'Notebook Found in a Deserted House'.
I believe that was the very first Lovecraftian short story I ever read and it scared the living hell out of me. It gets some powerfully Lovecraftian chills and atmosphere while being told in a dramatically different style.

‘The Hounds of Tindalos’ is probably Long’s most famous Mythos story. His ‘The Space Eaters’ is even more action-oriented than ‘Hounds’, and it’s a hoot — and it’s in that same Wildside Mythos Megapack.

John,
I have a copy of that Bloch story and will read it next.

b.t.,
Unless I read "The Space Eaters" instead!

Either way, I figure I won't go wrong.

"Hounds" is one of my favorite stories. I slipped a reference to it into one of my S&S stories that managed to see print.

Hey Keith, which story is that and where can I find it?

Thanks for asking. The story is "The Chronicle of the God Beneath the Sea". It was originally published in Eldritch Tales Vol. 2, No. 2. I'm putting out a collection of some of my short stories later this year entitled FARMHOUSE OF THE DEAD. It will be in there along with a couple of stories James published, among others. I'm hoping to have it out in time for the holidays.