Classic Horror Stories: The Colour Out of Space - H.P. Lovecraft 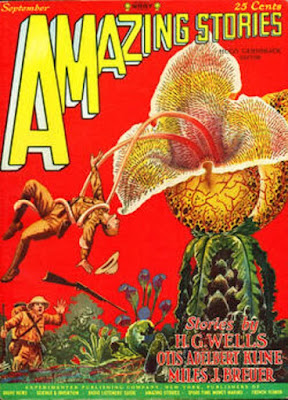 As Halloween approaches each year, I generally try to read more horror fiction. I’m getting an earlier start than usual this year by delving into the work of H.P. Lovecraft. Longtime readers of this blog may recall that I’m not a big Lovecraft fan, but I read something by him now and then. Recently, on pretty much of a whim while waiting in a doctor’s office, I read one of his most famous stories, “The Colour Out of Space”, which appeared originally in the September 1927 issue of AMAZING STORIES and was reprinted in the October 1941 issue of FAMOUS FANTASTIC MYSTERIES, as well as in countless Lovecraft collections over the years. (Neither of the pulp covers have anything to do with Lovecraft’s story, but at least it rates a mention on the issue of FFM.) 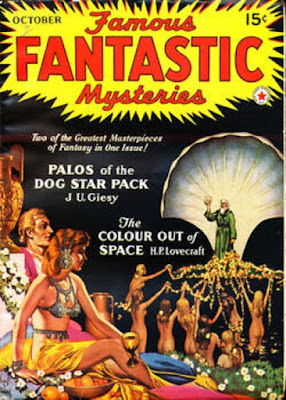 I have a hunch most of you have read this story already, some of you probably more than once. The plot is a simple one: a mysterious meteorite plunges from space, lands on the farm belonging to Nahum Gardner near the town of Arkham, time passes, evil things happen. The Gardner family descends into madness. The well is ruined and nothing will grow on the land. Eventually everybody else in the area shuns the farm where all this creepy stuff happened, until an engineer comes along to conduct a survey for a dam-building project and hears the story from one of the locals.

I have to say, I still have some problems with Lovecraft’s work. As with almost everything I’ve read by him, I got to the end and thought, “Wait. That’s it?” Robert E. Howard has spoiled me. I would have much preferred if the engineer was a two-fisted scrapper and the evil entity from space crawled out of the well and the two of them whaled away at each other with the plucky human emerging triumphant over the cosmic horror. Now that’s a story! But . . . it’s not the story that Lovecraft chose to write, is it?

However, for the first time I got a real glimpse of why Lovecraft’s work remains so popular nearly a hundred years later. The long paragraphs and the scarcity of dialogue take some getting used to, but I’ll admit, in this one I got caught up in the style and the sheer creepiness of the whole thing was very effective. For once, Lovecraft actually had me flipping the pages to see what was going to happen. There’s some actual storytelling going on in this yarn, and I can honestly say that I enjoyed it. I wouldn’t be surprised if there are more of these Lovecraft story posts here on the blog before the month is over.
Posted by James Reasoner at 6:00 AM

I first read this one at 14, in the Lancer Books collection of the same name, the one with the pink cover. That was a pretty good age for devouring Lovecraft. I'm perversely fond of the 1965 movie version with Boris Karloff and Nick Adams, DIE MONSTER, DIE!, although most HPL fans aren't. Haven't seen the version that came out last year with Nicholas Cage, or a 1987 try called THE CURSE. Lovecraft was nickel-and-dimed by Hugo Gernsback, who paid a princely $25 for the story. At that, Lovecraft had to keep after "Hugo the Rat" to get the check.

Bill Crider once told me that the perfect time to discover Lovecraft is the summer between eighth and ninth grades. That lines up pretty well with when you read this one, Fred.

Ha, I also discovered Lovecraft around that period. Some of his work is great like Shadow over Innsmouth. Some is even awesome in the true sense of the word, such as At the Mountains of Madness. Some, for instance Herbert West, is pure pulp. However, all too much other is heavy going.

If I want to curl up and enjoy horror, I’d rather pick August Derleth or Robert Howard.

Derleth is terrific. Ironically his weakest stuff is the Lovecraft “collaborations” and it is sad that is all some people have read by him. His Weird Tales horror stories are well written, tight and scary. I am now re-reading his Solar Pons stories, which are by far the best Sherlock Holmes pastiches.

Even his juveniles (Mill Creek Irregulars) are wonderful. Based on his boyhood friends, they really are fun. The fellow who was the real life “Sim” character was apparently amused in his late years by people who read the series tracking him down to talk to him.

I've read a few Derleth stories in WEIRD TALES and remember liking them. Didn't he also wrote for WT as Stephen Grendon, or some name like that? I need to look that up, because I remember liking those stories, too.

Indeed correct, Stephen Grendon was also the name he used for his stand-in in Mill Creek Irregulars.