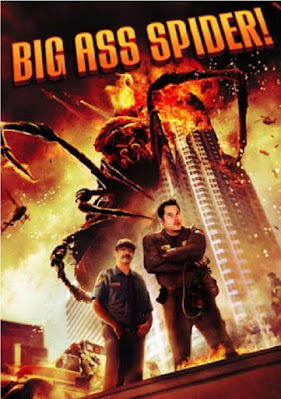 When I first saw the title of this movie, I though, “Nah, this has to got to be a joke. There’s not really a movie called BIG ASS SPIDER!” Well, as it turns out, there is, and also to my surprise, it turned out to be a pretty entertaining little film. What better movie to feature for an Overlooked Movies post the week of Halloween than a good old-fashioned Creature Feature?

BIG ASS SPIDER! is a throwback of sorts to movies like THEM!, right down to the exclamation point in the title and scenes involving the sewers along the Los Angeles River, as well as involvement by the military and a scientist who thinks he knows how to destroy the giant spider of the title. It’s actually an exterminator and his security guard sidekick who hold the key to defeating the creature, though.

This is an odd movie. For the most part, it takes a rather tongue-in-cheek approach, has some funny lines, and clearly the filmmakers have a lot of affection for the sort of movie they’re making fun of. But it’s also a little too violent and gory to work completely as a comedy. It might have been more successful if they had gone one way or the other. As it is, though, the hybrid approach works pretty well. Greg Grunberg, a top-notch character actor who has been in a ton of movies and TV shows, gets to play the lead for a change and does a fine job as the gutsy, determined exterminator. Lombardo Boyar is pretty funny as his sidekick. Ray Wise, not playing a smarmy bad guy for a change, is the officer in charge of the military effort to kill the rampaging giant spider. The acting is pretty good all around, and so are the special effects. I’m not sure why I never even heard of this movie until now, but I enjoyed watching it.

It is available on Amazon Prime. Going to watch it tonight.

You just gotta love that title!