Tuesday's Overlooked TV: The IT Crowd 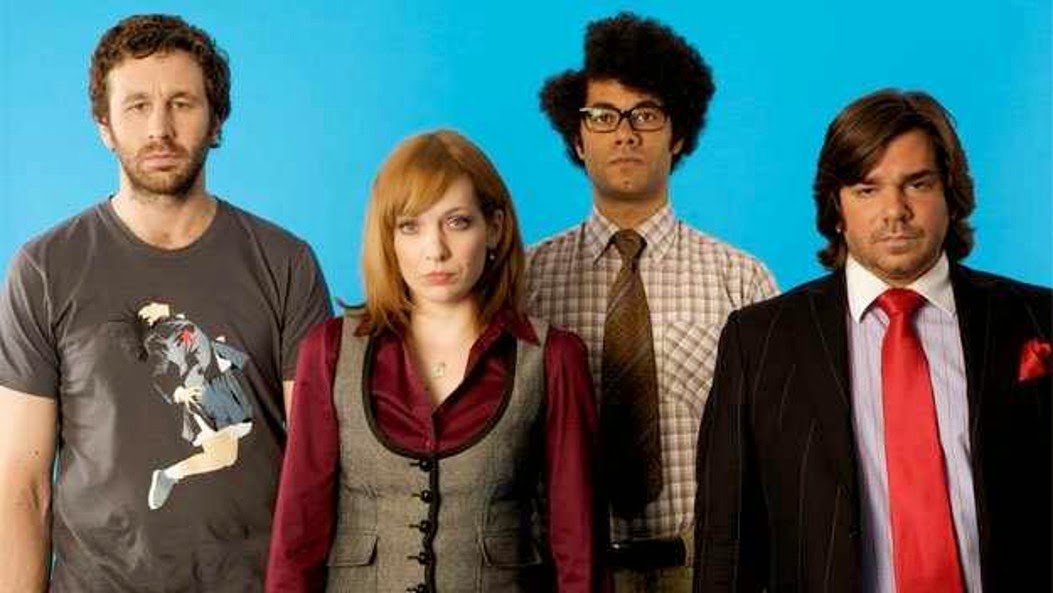 I had never heard of this British sitcom until my daughter Shayna recommended it. She has all four seasons on DVD, so we've been watching it recently, and I'm really glad she brought it to our attention.

THE IT CROWD follows the misadventures of the three people who make up the entire I.T. department of a British corporation. They're stuck in a dingy basement office and get no respect from their co-workers, even though without their efforts the whole operation would probably come crashing to a halt. Well, that may be a bit of an exaggeration, since their efforts seem to consist of asking the question that becomes the series' catchphrase: "Have you tried turning it off and on again?"

The three protagonists are Roy, a 30ish slacker; Moss, somewhat younger and nerdier; and Jen, who has a lot more corporate ambition but winds up trapped in the basement office as Roy and Moss's boss even though she knows nothing about computers. There are a few supporting characters—the sleazy head of the corporation and a Goth who works with Roy and Moss for a while being the main ones—but mostly the stories are just about the bizarre situations in which these three find themselves.

Shayna said she hesitated about recommending this series to us because, in her words, "It could have gone either way." I suspect that's true. Most people would probably either love the series or think it's completely unfunny.

I found THE IT CROWD absolutely hilarious. I haven't laughed as hard or as much at a sitcom since the first few years of THE BIG BANG THEORY. It's perfectly cast—Chris O'Dowd as Roy, Richard Ayoade as Moss, and Katherine Parkinson as Jen—and the writing is sharp and funny in every episode, all of which were written by Graham Linehan, who also directed the entire series. Because the three main characters are so dominant, and because Linehan was in total control all the way through, the series is absolutely consistent. And I was really sad when we watched the final episode. They could have gone on making it forever as far as I'm concerned.

A British friend recommended this to us years ago and sent me the series on DVD. Unfortunately, it got lost in the pile of other shows we watch and we only watched a few of the episodes, but so far I agree with you. So many British shows are like this in that they have the same writer for all the episodes (and sometimes, as here, the same director too). I think it helps a lot.

A little too silly for me, I'm afraid, based on the clip.

Oh, it's silly, all right, no doubt about that. Sometimes that works for me and sometimes it doesn't, but this is one case where it did.

That clip didn't make me laugh, either, but maybe the rest of the shows are better.

Graham Linehan is an absolutely fantastic writer - for more of his earlier stuff, also look to Father Ted (about Irish priests on a remote island) and Black Books (co-written with Dylan Moran, about a misanthropic bookstore owner). Each are similarly anarchic but with fantastic depictions of character.

If you're after more absurdist British humour, Green Wing and Campus are amazing, as is Garth Merenghi's Darkplace (another Richard Ayoade & Matt Berry piece).

Thanks for the suggestions, Sean. I'll definitely check out those series.