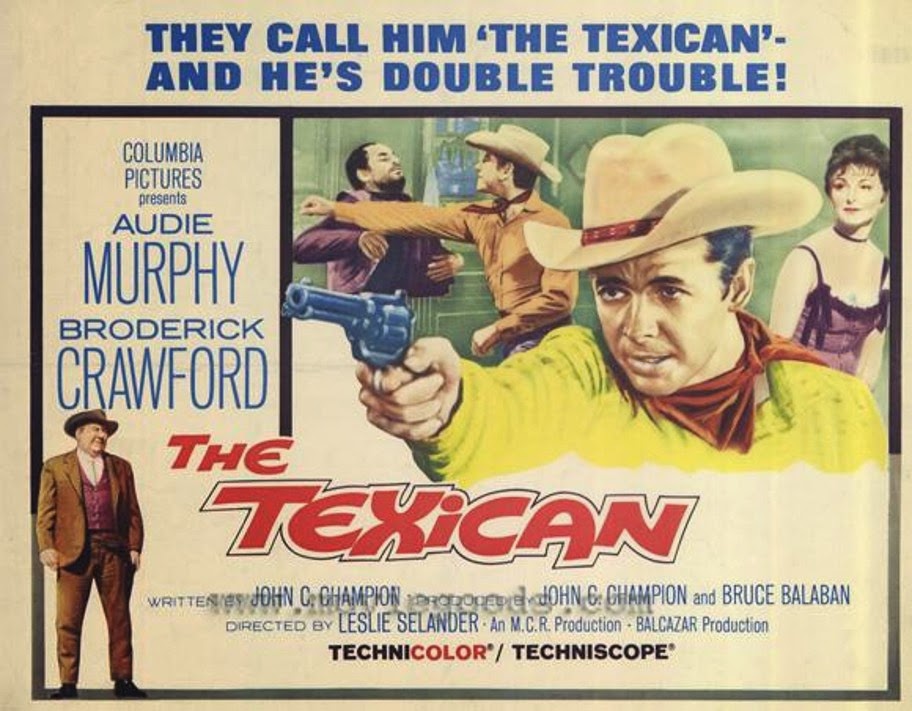 I've been an Audie Murphy fan ever since I watched a bunch of his Westerns on TV with my dad when I was a kid. I suspect my dad felt a certain kinship with Audie, since they were both from small towns in Texas and the sons of farmers. They were close to the same age, too, although my dad was a little older. Of course, my dad didn't have the same sort of combat exploits—he arrived in Europe right after V-E Day and spent his time stringing telephone wire—but I suspect a lot of servicemen from that era identified with Audie to a certain extent.

At any rate, I've enjoyed Audie Murphy's movies for a long time, but somehow I'd never seen THE TEXICAN until now. It's from 1966, late in his career, and a Spaghetti Western shot in Spain rather than a Hollywood studio film, although the two leads, the writer, and the director were all American.

Murphy plays a former lawman from Texas named Jess Carlin. He's framed for a crime by the local owlhoot mastermind (an old and tired-looking Broderick Crawford) and forced to flee into Mexico. But when Corbin hears that his brother, a crusading newspaperman, has been murdered, he has to return to find the killer.

Oddly enough, after Murphy's character returns to Texas, the script by John C. Champion never again mentions the fact that he's wanted by the law. He walks around seemingly without any worries about being arrested, all the while trying to dig up evidence that will prove who killed his brother. We know all along, of course, that Crawford's character was responsible for the killing. Murphy's character seems to know that, too, but his low-key investigation into the affair makes the movie drag considerably at times before it moseys its way to a pretty good final showdown.

Murphy turns in a decent performance, as he usually did. Technically, maybe, he wasn't a very good actor, but I always found him believable and likable in his roles. Crawford seems bored by the whole thing, but his commanding voice and physical presence mostly make up for that. The rest of the cast is all European and adequate at best.

But the photography is excellent, the music's not bad (not Ennio Morricone level, but not bad), and old pro director Lesley Selander, who got his start directing B-Westerns in the mid-Thirties, including some of the Hopalong Cassidy pictures, does a top-notch job of staging the few action scenes the script gives him. All that adds up to a movie that's maybe slightly below average, but it still held my interest and I'm glad I watched it.
Posted by James Reasoner at 6:30 AM

I think Audie is quite underrated - he has a lot of charm on screen. A couple of my favorite films of his are the very entertaining "The Duel at Silver Creek," in which he's a hoot as the flashy Silver Kid; and the progressive, pro-Indian "walk the Proud Land," in which he plays the real-life Indian Agent John Clum. But I have many more to see

Actually one of my favorite Audie Murphy flicks.

Encore Western? ThisTV? Someone had it in rotation of late.

I hope to gather some links finally after surgery tomorrow...

Todd,
It was on getTV, which has been showing a lot of Westerns on the weekends. And thanks for the Hart of Dixie link. I'm off to take a look at it.

Good luck with your surgery. Nothing too serious, I hope.

Broken radius, at the wrist...my xmas gift to myself, so immediate sympathy for Livia's broken arm.

I agree with Patrick. Murphy - with a career that started as a publicity stunt - was a decent actor, certainly better than anyone would have expected.