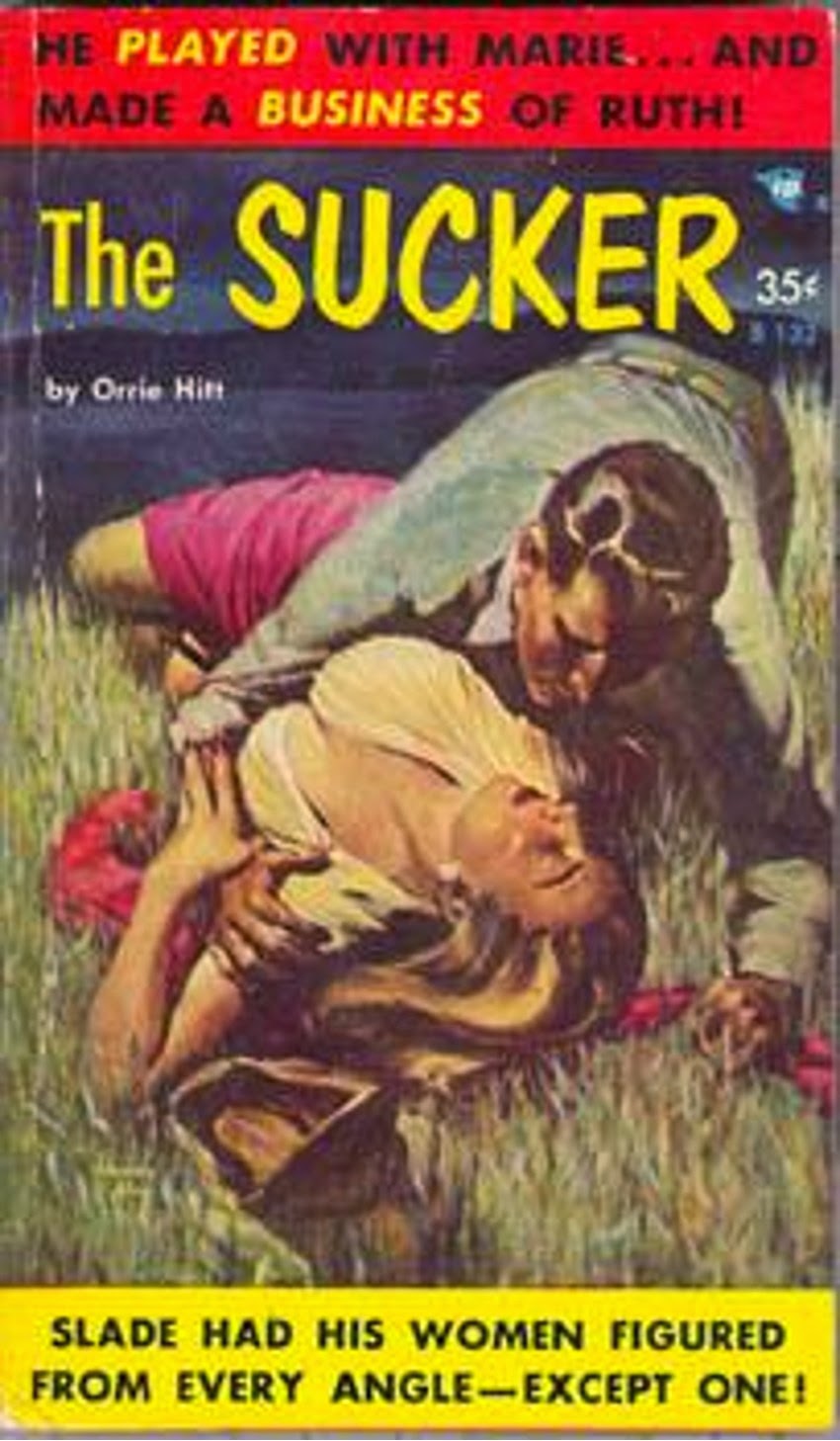 I felt like reading an Orrie Hitt novel since it had been a while, and I picked a really good one in THE SUCKER. It's written to the usual Hitt formula, but also as usual, he finds ways to change things up enough to keep the story fresh and interesting.

I thought this was going to be a car racing book at first—some of the back-story concerns how one of the female characters winds up in business with the driver responsible for the accident that killed her father—but instead it centers around a company that sells engines and engine parts to hotrodders, as well as a revolutionary design for one of those engines.

The protagonist and narrator is Slade Harper, the engineer responsible for that design, who's running a down-on-its-luck gas station that he won in a card game from a guy on a construction project in Iceland. The guy wound up blowing his brains out over an Icelandic girl, and when Slade shows up to claim the gas station, he finds the former owner's sister still living there and running the place. (You can't accuse Hitt of skimping on the back-story.) Anyway, Slade winds up working for a former race car driver and the beautiful daughter of the guy the driver killed in a crash (see above paragraph), and being an unscrupulous heel, Slade figures out a way to swindle them out of the company. But then he falls for the girl, and things get complicated...

Hitt's writing is really sharp in those one, with plenty of good lines and a pace that barrels along and an overwhelming sense of blue-collar angst. Slade Harper may well be the most unsympathetic Hitt protagonist I've encountered so far. Usually the main characters in these novels are amoral jerks (or at least they think they are), but deep inside they have a streak of decency. With Slade, the reader really has to wonder if that's going to turn out to be the case.

Hitt's "heroes" are usually torn between three women: the good one, the bad one, and the tragically flawed one. That seems not to be the case in THE SUCKER, as all three women Slade gets involved with are basically sympathetic characters. Or are they? Again, Hitt comes up with some nice twists. I've read enough of these novels to know who the protagonist is going to wind up with most of the time, but that question kept me in suspense all the way to the end, too.

Originally published by Beacon Books in 1957, THE SUCKER is available in an e-book edition from Prologue Books. It's a fine example of the thing Hitt did best: he wrote novels that are actually very small in scope, where not much happens and the things that do affect only a small handful of people. But in the lives of those people, those events are epic and earth-shaking, and nobody ever conveyed that emotion more powerfully than Orrie Hitt.

I finished reading my first Orrie Hitt novel--Never Cheat Alone--a few days ago, and it, too, had the protagonist torn between three women.

For example, he has a female character being touched inappropriately by writing--and I'm paraphrasing because I can't find the passage quickly--"He touched her in a way only a husband should touch his wife."

Hitt's way of describing the interaction made it seem even creepier than a stroke-by-stroke description would have.

This is indeed a good one, as are many (though certainly not all) of Hitt's novels. I've thanked James before for turning me on to Hitt's work several years ago with his blog post on SHABBY STREET, but I feel compelled to do so again. Since that post, my passion (if you'll excuse the pun) for Hitt's work has remained strong...here is my current (and growing) collection (and there're another half-dozen or so not pictured on this shelf), one due in very large part, if not singlehandedly, to that aforementioned Forgotten Books blog post.

I'll try making it visible on this page, rather than a link...not sure if this'll work or not.

Orrie Hitt is iconic. I remember when Art Scott wore an ORRIE HITT faux-ID at one of the paperback conventions. Turned a lot of heads!

Michael,
Yeah, Hitt wrote some of the creepiest scenes I've read--which is a good thing, of course.

Ron,
I'm very pleased to have played a part in the resurgence of interest in Hitt's work. I'm not sure anyone's ever done a better job of capturing that particular segment of mid-20th Century society.

George,
I can imagine the reaction!