The Marvels Project: Birth of the Super Heroes - Ed Brubaker and Steve Epting 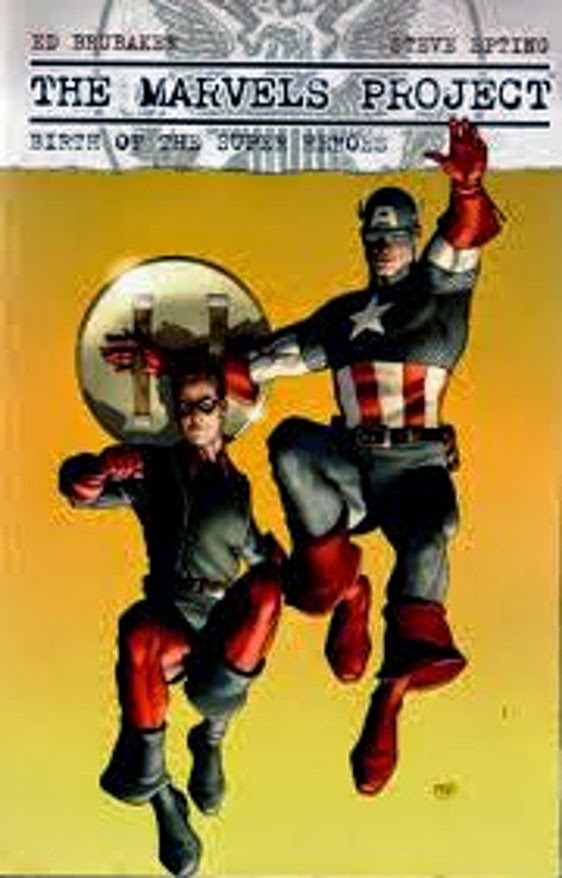 This hardback collection reprints a mini-series published in 2009 and 2010, a short time before I started reading comics again, but somehow I'd never heard of it until I came across a copy at the Half Price Books in Corpus Christi last summer. It's written by one of my favorite modern comics authors, Ed Brubaker, and drawn by one of the best artists, Steve Epting. Since those two were responsible for what's probably the best run on CAPTAIN AMERICA since the days of Lee and Kirby, I expected to enjoy THE MARVELS PROJECT, and I certainly did.

Like Kurt Busiek and Alex Ross's iconic MARVELS, this story takes a look at some familiar events from a different perspective. The primary point of view character in THE MARVELS PROJECT is Dr. Thomas Halloway, who was also the masked crimefighter known as The Angel in Golden Age comics stories published by Timely, the company that would one day become Marvel Comics. Through Halloway's eyes we get a fresh look at some pivotal events in comics history: the creation of the original Human Torch; the attack on New York by Prince Namor, the Submariner, and the epic battles between him and the Torch; the transformation of Steve Rogers into Captain America; the introductions of the sidekicks, Bucky and Toro; and finally, after foiling a diabolical plot by the Red Skull, the formation of The Invaders, the first superhero team. Along the way, a number of other familiar characters show up, such as Nick Fury, The Destroyer, and even The Two-Gun Kid.

That last line is enough to tell comics fans that THE MARVELS PROJECT is a mixture of comics history from the actual Golden Age and some modern-day retconning that includes elements like The Invaders and John Steele. I'm generally a purist when it comes to such things, but Brubaker, after all, is the guy who not only did the unthinkable—bringing Bucky Barnes back to life after fifty years—but made even comics curmudgeons such as myself not only accept it but like it. He does a great job here, telling a fast-paced story steeped in history and nostalgia. Epting's art is excellent as well. His Captain America is the best since Jack Kirby's, and his period details are top-notch.

I'm glad I came across this one. It's thoroughly enjoyable and brought back a lot of good memories of Golden Age stories I've read, mostly in reprint volumes but a few in the original comics that I bought many years after they were first published. It was a different era in comics but a good one, and if you'd like to revisit it, THE MARVELS PROJECT is well worth your time.

On rainy days the kids in the block would bring over their comics, stacks and stacks and stacks of them. I distinctly remember on a particular rainy day when somehow (NOT A FREQUENT OCCASSION) at least seven neighbor kids sitting on the floor of my enclosed front porch and while the rain poured down we read all day long. We snacked on apples and drank pop.

Today Tom Rizzo posted an article I wrote at his request. For the first time I reveal a lot more about my past. It occurs to me that you must have had a similar childhood as I did. Certainly to be reading (and now writing) as much as you do, you also must have been a bit of a "loner" yourself, or at least, were very independent.

Charlie,
That's an excellent article on Tom's blog. Thanks for pointing it out to me. (It's here, by the way, for those of you who might want to check it out: http://tomrizzo.com/guest-post-charlie-steel-and-billy-thornes-gold/)

Yes, reading has always been extremely important to me, ever since my sister took me to the bookmobile when I was six years old. I've probably spent more hours of my life reading than doing anything else except sleeping. I've read at least 100 books a year for nearly 50 years now.