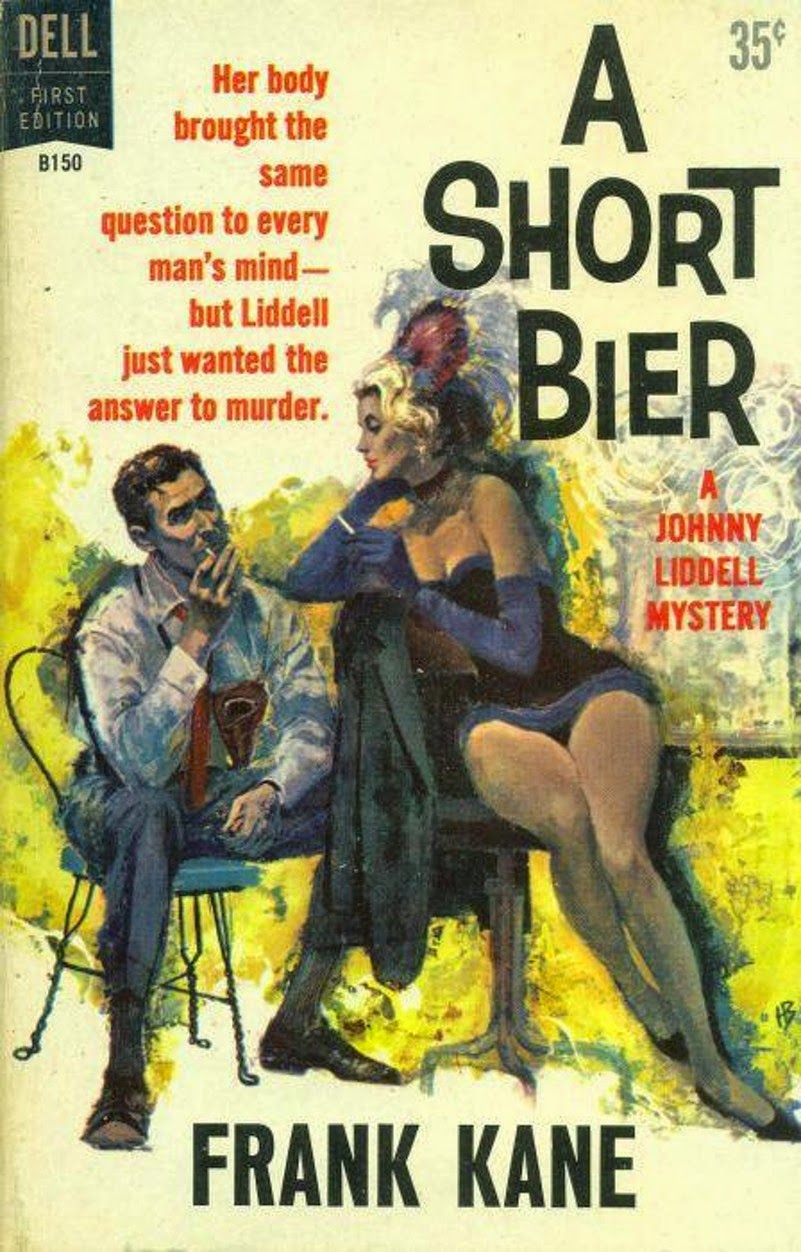 For my first Forgotten Book of the new year, we've got another old favorite author of mine whose work I've been reading since high school. Frank Kane has come in for a good deal of criticism over the years because of the formulaic nature of his books and his tendency to cannibalize his earlier work, but for some reason his private eye yarns nearly always resonate well with me. They're definitely literary comfort food.

A SHORT BIER is from 1960, a Dell paperback original with a cover by Harry Bennett, who did the covers for several of Kane's novels. Bennett is no Robert McGinnis, but I like his covers all right. They always seem to fit the subject matter well.

This case opens with the murder of a crusading newspaper reporter. In a nice twist, there's no real mystery about this killing. We know the murder is a mob hit, and we have a pretty good idea why the contract was carried out. A SHORT BIER becomes, instead, sort of a private eye procedural, as we watch Johnny Liddell unravel the plot behind the murder and discover who ordered the reporter killed. Later on there's another murder where the reader doesn't know who the killer is, and Kane handles that part of the plot expertly as well.

In between we get some nice scenes involving Liddell and his friend Jim Kiely, the editor of the newspaper the murdered man worked for, and Jim's beautiful, redheaded reporter daughter Muggsy, who happens to be Liddell's girlfriend. I've always liked Muggsy Kiely. She's almost as good a girlfriend/sidekick for Liddell as Lucy Hamilton is for Michael Shayne. Liddell also tangles with Las Vegas showgirls, Syndicate triggermen, Puerto Rican juvenile delinquents, prizefighters, stoolies, bartenders, and corrupt politicians. He smokes constantly and guzzles down bourbon while not walking along rainy streets in New York. This is a 1960 private eye novel, and don't you forget it.

I'm sure you can tell from that description whether this is the sort of book that would appeal to you. As for me, I raced through it and enjoyed every page. Johnny Liddell is my kind of private eye: smart, tough, a bit of a wise-ass, a little world-weary at times, and hell on killers. Good stuff, I say.
Posted by James Reasoner at 6:30 AM

I recently read and liked BULLET PROOF, my first Johnny Liddell mystery by Frank Kane. There is a scene where Liddell sticks a name card in his hatband and pushes the hat on the back of his head. This and other similar scenes were reminiscent of old black-and-white crime mysteries and movies where the characters wore black suits and fedoras and carried .45s and tommy guns. "Good stuff," I agree.

I've always loved Frank Kane. BULLET PROOF is certainly the best of the first decade of the Liddell series. DEAD WEIGHT and POISONS UNKNOWN are also quite good from those, his best, years. Kane's sharply focused cinematic setting of scenes and description of incident and character are strong attributes, as is his sense of atmosphere and place. Heck, writers cannibalizing their own work is part of how it's done; ol' Frank just went a little overboard at times. For me his weak point is that the Liddell character is so generic. Sort of a poor man's Michael Shayne, which is how Dell packaged the series, which nearly always had terrific covers.

Stephen, thanks for the insight into Frank Kane and his Liddell series. I'll be reading more by Kane in future.

Yep, one I'd enjoy. If I ever come across a copy I'll pick it up, and/or the ones Stephen cites.

I like Steve Mertz's description of Johnny Liddell as "a poor man's Michael Shayne." Of course, someone on this blog knows Mike Shayne's work really, really well!

Gotta love the name Muggsy—especially for a woman. This sounds fun.

Kelly,
Muggsy Kiely is a great character. She fills two roles in the traditional private eye yarn, the loyal girlfriend and the wisecracking reporter sidekick. And she's a redhead, to boot! Geez, I think I'm in love.