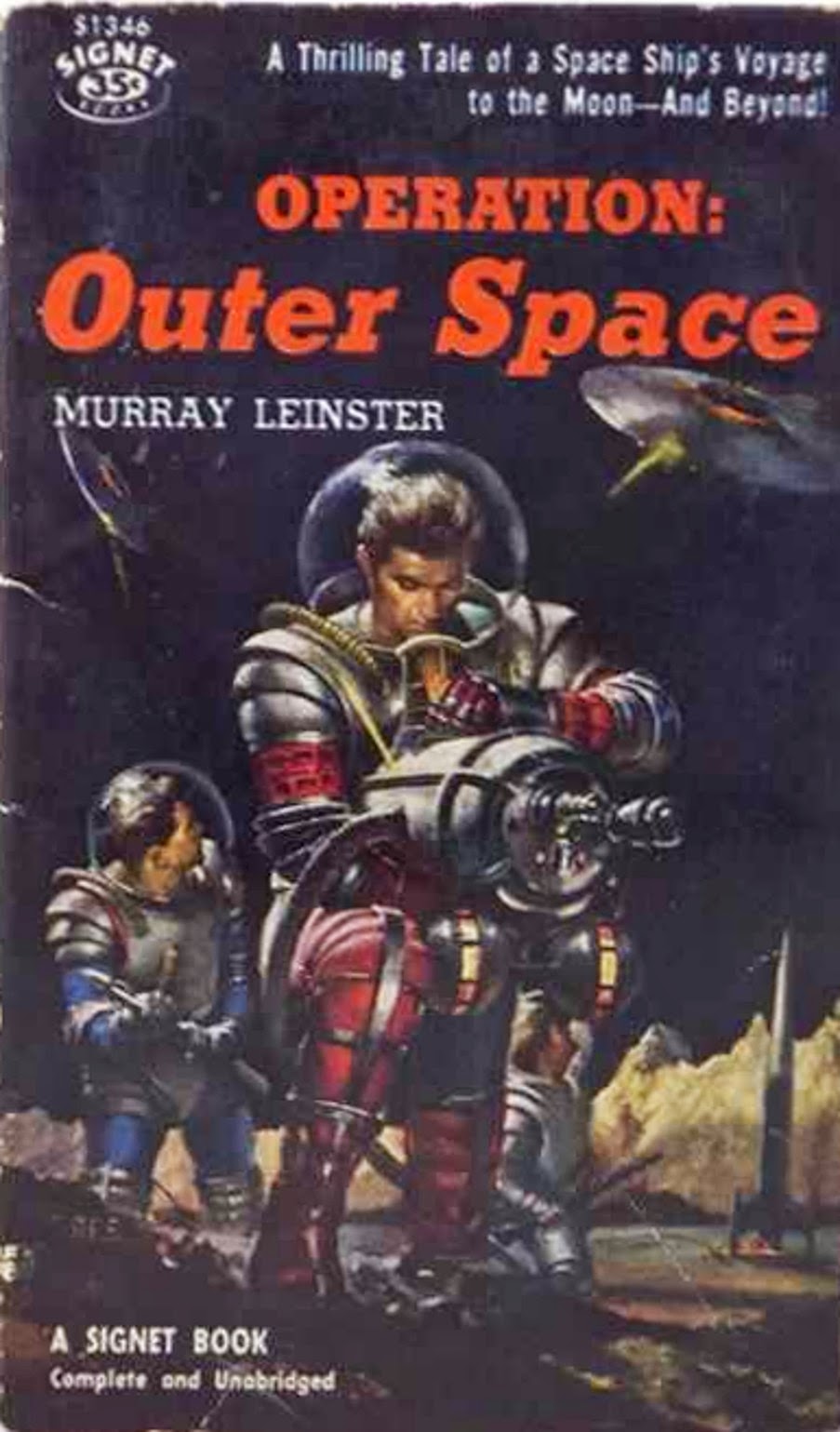 I have to admire Murray Leinster. He was writing science fiction before the term existed. But he also wrote mystery, adventure, and Western yarns for the pulps. He wrote movie novelizations. Late in his career he wrote TV tie-in paperback novels. He wrote a little bit of everything for more than fifty years and did it well.

He's remembered mostly for his science fiction, though, and OPERATION: OUTER SPACE is a good example of his work. Originally published in 1954, this novel manages to be very much of its time while also being sort of a throwback to the "scientific romances" published in the first two decades of the Twentieth Century, when Leinster started writing.

The protagonist of OPERATION: OUTER SPACE is Jed Cochrane, who works for an advertising agency producing TV shows that the agency's clients sponsor. He's very Madison Avenue, a slick guy with a smart, beautiful secretary he can't see is in love with him. As a favor to one of his bosses, he's sent to Lunar City to promote a scientific discovery by the executive's son-in-law. Cochrane's secretary Babs goes with him, of course. The first part of the novel plays a lot like MAD MEN, only set on the Moon. In its satire of the advertising business, it reminded me as well of Pohl and Kornbluth's THE SPACE MERCHANTS, although it's considerably more gentle in its humor than that novel.

But then it turns out that the invention Cochrane is there to promote, a new method of radio transmission, can be adapted into a faster-than-light drive for spaceships. (Trust me, it makes sense in the book. Sort of. Enough to buy the premise, anyway.) So what does an ad man do when he finds himself with an FTL drive? He gets a cameraman and a writer and takes off for the stars, of course, taking along his faithful secretary. Then he sells advertising time and beams their adventures back to Earth for a TV show.

There are some other characters going along for the trip, including a psychologist and a sociopathic wealthy playboy and his beautiful wife. The rest of the book consists of a travelogue of distant worlds, one of the staples of early-day SF, along with the adventures our intrepid travelers have there. To be honest, those adventures are pretty mild, but they're still interesting and Leinster is one of the best at describing alien worlds.

We get a little more satire to close out the book when the group returns home, and Leinster wraps things up nicely. There's nothing groundbreaking about OPERATION: OUTER SPACE, but it's well-written, has a likable hero, provides a number of funny lines, and is generally just a pleasant, enjoyable book. A comfort read, if you will, for those of us who grew up in an era when rocket ships had fins and still miss those days.
Posted by James Reasoner at 6:00 AM

I have two or three copies of this book, and you've made me want to read it yet again. Leinster is seldom mentioned these days, but to me he was one of the greats. Besides being a writer, by the way, he was also an inventor. Quite a guy.

Like Bill, I've been a fan of Murray Leinster's work for decades. He's a very versatile writer. Leinster was also a very good short story writer.

Not only did Leinster write mystery, SF, western, and adventure, but he also appeared in the romance and love pulps. He had several stories in LOVE STORY during the 1920's.

A wonderful writer I was introduced to when reading Astounding Science Fiction back in the late 1950s and on. I don't think I've read this, certainly doesn't look at all familiar and have never seen this cover. Sounds like fun.

I like Leinster a lot, especially at short lengths. And I love the cover art on this one.

Memories, memories. He did a pair of Gold Medal "invasion" novels in the late 50s that I also enjoyed. Thanks for remembering him, James.

Walker, he wrote two romance novels as "Louisa Carter Lee" -- one of which, I believe was his first published book.

One of his books that I liked especially was THE MONSTER FROM EARTH'S END, which was shlockingly adapted for the Mamie Van Doren vehicle THE NAVY VS. THE NIGHT MONSTERS. The flick had an interesting cast though, including Anthony Eisley, Billy Gray, Bobby Van, Pamela Mason and Mike Hammer himself -- Biff Elliott.

Must be something in the air. I don't think I've ever read a review of a Murray Leinster book, and now this is the second one in less than 12 hours. Hmmmm....

One of my favorites was his "Pirates of Ersatz". Image here:
http://www.amazon.com/Astounding-Science-Fiction-Pirates-Ersatz/dp/B00DIJ76FC