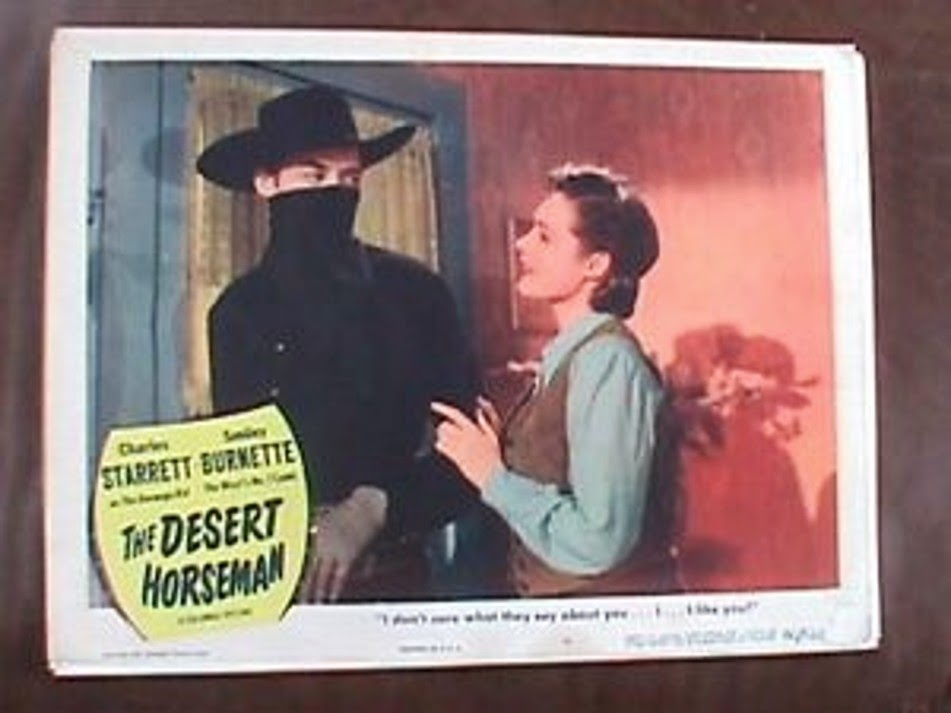 It's sort of a given that the movies I write about in this series are ones that I like, but every now and then I'll bend that rule a little to talk about a film I thought was pretty bad but at least had something of interest about it.

In this case, it's the fact that here I am, 61 years old and a fan of Western B-movies for as far back as I can remember (and I mean that literally—some of my earliest memories are of watching Roy Rogers, Gene Autry, and Hopalong Cassidy movies), and yet I had never seen one of the Durango Kid movies starring Charles Starrett. I'd read about them over the years but somehow never watched one.

Well, I've remedied that now by watching THE DESERT HORSEMAN, a 1946 entry in the series. By the way, that title has absolutely nothing to do with the story. In this one, Starrett plays drifting cowpoke and former army officer Steve Godfrey, who's also the masked hero The Durango Kid. Everybody seems to have heard of The Durango Kid, but I was never sure if he was supposed to be an outlaw, a good guy, or what. He's on the trail of an outlaw who stole an army payroll, a crime for which Steve Godfrey was framed. In the process of that search he stumbles into a save-the-ranch story in which a beautiful girl's father and uncle are murdered so the villainous lawyer who pretends to be her friend can pressure her into saving the ranch. I'm not sure why the lawyer wants the ranch—there's a rumor there's gold on it, but the bad guy actually starts that rumor—and I'm not sure that's ever resolved. This is a pretty muddled script.

Starrett's sidekick, the ranch cook, is played by Smiley Burnette, and to be honest, I have a pretty low Smiley Burnette tolerance. He was okay as Frog Milhouse in the movies he shared with Roy and Gene, but a little of him goes a long way, and there are four or five musical numbers with him in this movie, which is too much for a film with a running time of less than an hour. The featured musical group is Walt Shrum and His Colorado Hillbillies, a far cry from the Sons of the Pioneers or the Riders of the Purple Sage.

Starrett himself is a pretty athletic hero as The Durango Kid, but he's wooden as can be when he's Steve Godfrey. The rest of the cast is adequate at best. The production values are not bad, though. There are some decent stunts by Jock Mahoney, and the photography by William O'Connell is excellent. What it boils down to, though, is that THE DESERT HORSEMAN is a Columbia production, and the Columbia B-Westerns were just never as good as the ones from Republic.

But at least I can say now that I've seen a Durango Kid movie. For all I know this is the worst of the lot and not representative of the rest of the series. Maybe I'll watch another one sometime (they show up occasionally on one of the digital TV channels here). But I don't think I'll be getting in any hurry to do so.
Posted by James Reasoner at 6:00 AM

I always like a Durango Kid movie, bad as they are. Starrett's first name was always Steve, I think, in the series, but he had various last names. Plot didn't really matter to us 7-year-olds back in the '40s as long as there was some ridin' and shootin' and a masked hero. I agree about Smiley Burnette, though Smiley himself thought he was great. I believe he endeared himself to Starrett when he was hired by telling him, "They brought me in to save the series."

I guess you have to be a kid to like The Durango Kid. I liked him a lot back in the 1940's when I was a little kid and now that I'm entering my second childhood, I'll probably start liking him again.

All my pals back then liked him mainly because of his great black mask and costume. The name had a great sound to it also. Wish he had a whip also. In fact later on, a couple cowboy heroes were given whips: Lash LaRue and Whip Wilson.

The Durango Kid was a much more impressive character on the big screen. The black outfit, the white horse. I can remember seeing a few of those at Saturday matinees back in the day. Now they're on GET TV. Jock Mahoney did so much stunt work for Starrett that he eventually ended up playing himself in a couple of the films. If you look close you can see Mahoney wearing his Range Rider belt with the RR on the buckle. Sometimes I'd like to strangle Smiley Burnett.

Smiley could be really annoying and childish at times but I guess that was the whole point. The kids wanted childish humor and the sidekicks gave it to them in large doses. Tex Ritter had a couple of the dumbest sidekicks ever. They acted like they had severe mental problems but the kids loved it.