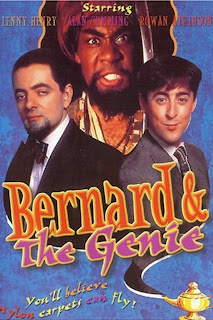 Like CHRISTMAS TWISTER last year, one of my daughters recommended an obscure Christmas movie to write about this year. It's BERNARD AND THE GENIE, a love-it-or-hate-it British TV movie from 1991 that seems to have developed quite a cult following. Also like CHRISTMAS TWISTER, it has a considerable amount of oddball charm, but it's a better film overall.

Once that gets sorted out, as the British say, Bernard and the genie become friends and Bernard gets plenty of wishes granted. Everybody who has wronged him gets their comeuppance, as you'd expect, but along the way there are some very funny scenes as Bernard introduces his new buddy to modern culture. Although Christmas doesn't play a big part in the plot, it's definitely the season in which the story is set, with appearances by carolers, Santa Claus, elves, etc., and even some surprisingly profound theological discussion between Bernard and the genie.

This is a slight but amusing and good-hearted film. The production values are pretty cheap, but it's a movie about dialogue and relationships, not special effects. The two leads are very good in their roles, and the script by Richard Curtis is clever and effective. It's certainly not your typical Christmas movie, but BERNARD AND THE GENIE is well worth watching.