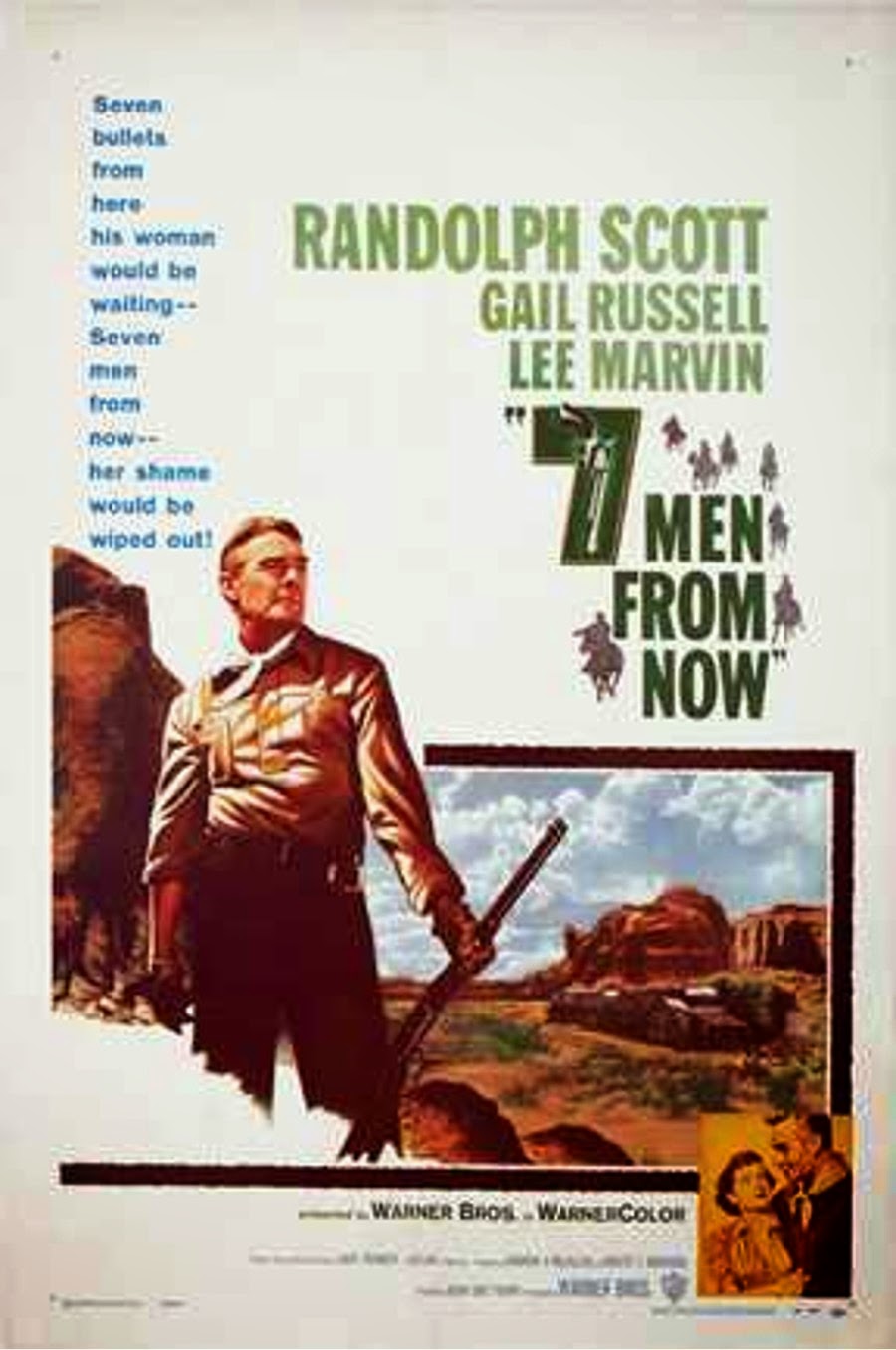 I would have sworn I'd seen all the Randolph Scott movies directed by Budd Boetticher, but we recently watched SEVEN MEN FROM NOW in a newly released DVD edition and I don't really ever seeing it before. It was the first of the Scott/Boetticher collaborations, and like the others, it's a top-notch hardboiled Western.

Scott plays a mysterious loner named Ben Stride, who early on establishes how dangerous he is by gunning down a couple of outlaws in the opening scene. (By the way, one of the outlaws is played by a very young John Beradino, a former major league baseball player who went on to a long career playing Dr. Steve Hardy on GENERAL HOSPITAL, a great character most of GH's current viewers have probably never heard of. But I digress...)

Stride helps out a couple of stranded pilgrims whose wagon is stuck in a mudhole, a married couple played by Gail Russell and John Larch. He agrees to travel with them since they're all headed to the same town. A short time later they encounter a couple of hardcases (Lee Marvin and Don "Red" Barry) who are acquainted with Stride. Marvin's character reveals that Stride is a former sheriff out for revenge on the seven outlaws responsible for his wife's death. Hence the title SEVEN MEN FROM NOW. He's already killed two of them, and he plans to catch up with the other five in the town where everybody seems to be headed.

Burt Kennedy's screenplay would seem to be fairly simple, but it has a nice twist or two waiting. The action scenes are well-staged, the scenery is beautifully photographed, but the real appeal of SEVEN MEN FROM NOW is watching the great cast at work. Scott as the stoic hero and Marvin as a charming villain play off each other very well, and there's a really fine scene with the two of them, plus Russell and Larch, inside the close confines of the wagon while it's raining outside, that's claustrophobic in its intensity. Everything is conveyed in dialogue and close-ups, but there's a sense of pent-up violence that's almost overwhelming.

SEVEN MEN FROM NOW is short, less than an hour and a half, but it's very satisfying, the sort of movie where you don't want to take your eyes off the screen for a second. Not to sound too much like an old curmudgeon, but it struck me that this is a movie about grown-ups, with a lot of realistic, honest emotion behind its action scenes and Western trappings. I thoroughly enjoyed it, and if you haven't seen it yet, you should check it out.

James, this might be my favorite western film. It certainly stands up to re-watching more than most any other.

There are so many gem-like scenes where the script and performances shine.
Like the scene where Marvin and Barry ride into the ghost town to meet with Payte Bodeen’s gang. This whole sequence is gold, but Marvin’s sly reveal that the woman slain in the robbery was Ben Stride’s wife is met with a moment of stunned, muffled shock by the gang that speaks volumes without a single line of dialogue.

And how about that stylish final showdown? Randolph Scott is so freakin’ epic that you don’t even have to see him draw. Marvin’s reaction is perfect, ending with him clutching at the treasure he’ll never see.

I love all of the Scott/Boetticher films and cannot pick a favorite.
James, pardon my excess enthusiasm but you really ought to check to determine if you’ve seen them all. There are a couple more, but to my mind the unmissable ones include The Tall T, Ride Lonesome and Comanche Station.

I agree with Mr. Hocking. In fact, Comanche Station is in my opinion the finest western ever made. Boetticher gets a lot of credit for the flicks he made with Randolph Scott, and deservedly so, but Burt Kennedy's scripts have a lot to do with it. They're pure gems. "Pure," as Claude Akins says at the end of Comanche Station. If you check out "Yellowstone Kelly" "Fort Dobbs," and "Six Black Horses," which Kennedy wrote, you'll find plots, dialog and scenes very similar to those in the Boetticher films. He had a unique way of putting a story together, at least in those days. He could write but as a director later in his career he was no Budd Boetticher.

I've seen this movie several times and according to my notes, I've liked it more and more each time. I've gone on record before about my respect for Randolph Scott but here I go again.

He is my favorite actor in western movies. He has everything down perfect: the look, the clothes, the horse, the tough, spare dialog. I've seen him in some below par westerns but his acting raises a film to the outstanding level.

The only actors, still acting, that can compare to him are old timers like Clint Eastwood, Robert Duvall, and a couple others. But they are now getting pretty old and soon all we will have is the action and special effects actors.

It's lucky we have TCM and the encore western channels, otherwise we wouldn't see anything on TV worth a damn, especially if it was black and white.

That's one of my reasons that I've built up my own library of favorite films on dvd.

I'm not sure I've ever seen FORT DOBBS. I'll have to look into that. YELLOWSTONE KELLY and SIX BLACK HORSES were favorites of mine from when I saw them at the drive-in as a kid. I really need to watch them again. I looked up Boetticher on IMDB, and while I'm not sure about DECISION AT SUNDOWN, I'm certain I've seen all the others with Randolph Scott. COMANCHE STATION is probably my favorite, although I like all of them. That was a great era for Westerns.

Randolph Scott is just about the perfect Western hero, and he was at his peak in these films, and in Peckinpah's RIDE THE HIGH COUNTRY.

No doubt, this is a very good Western and near the top of the Scott/Boetticher collaborations (I personally rate RIDE LONESOME higher).
I agree with Mr. Whalen that the scripts by Burt Kennedy played a big part in making these films so memorable. In fact, it has occurred to me more than once that Kennedy may be one of my favorite Western "writers".

Glad to hear from another Burt Kennedy fan, Wayne. I was so enamored of Comanche Station I took the basic plot and characters and set it 400 years in the future on another planet and called it Tulon Station. It later became the first chapter of my space western novel Jack Brand. The Tulon landscape bears a striking resemblance to Lone Pine.

Yeah. I really miss movies for grown ups, too, James. So few of them these days. This is one hell of a good movie in every respect.

The Boetticher/Kennedy/Scott films rank among my top-10 westerns, and this one is probably my favorite.The scene in the covered wagon with Lee Marvin is powerful and unnerving.