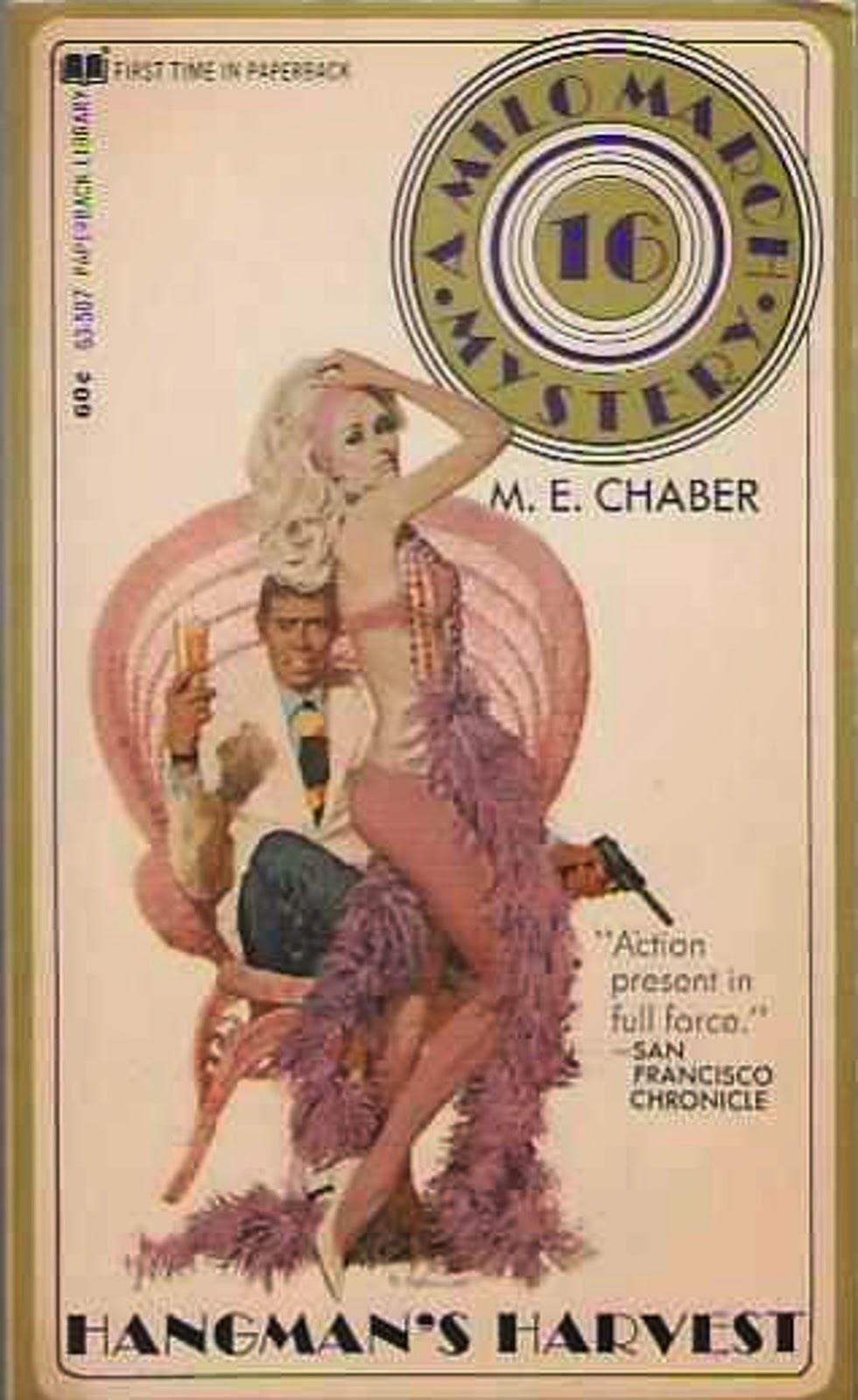 HANGMAN'S HARVEST is a book I read many years ago and remember fondly for several reasons, including the McGinnis cover with a dead ringer for James Coburn on it. That Coburn lookalike was featured on all the Seventies paperback reprints of the Milo March series. Despite that this one says, it's not the 16th in the series, it's actually the first, published originally by Henry Holt in 1952 and reprinted in paperback a year later under the title DON'T GET CAUGHT.

Another reason I recall this book is that I read it during the first trip I took with Livia, back in the summer of 1976. I enjoyed it a lot, but I realized even then that it was heavily influenced by Dashiell Hammett's Continental Op fix-up novel RED HARVEST, right down to the similar titles. In this one Milo March, who's an insurance investigator but functions basically as a private eye, comes to the fictional Aragon City on a case and proceeds to take on all the gangsters and corrupt politicians who run the town. It's a very violent, fast-moving tale and quite entertaining. The Milo March books are about all I've ever read by Kendall Foster Crossen, the prolific pulpster and paperbacker behind the M.E. Chaber pseudonym. Crossen wrote the oddball pulp novels about the Green Llama, all or most of which are currently available in reprint editions. I want to try those one of these days. 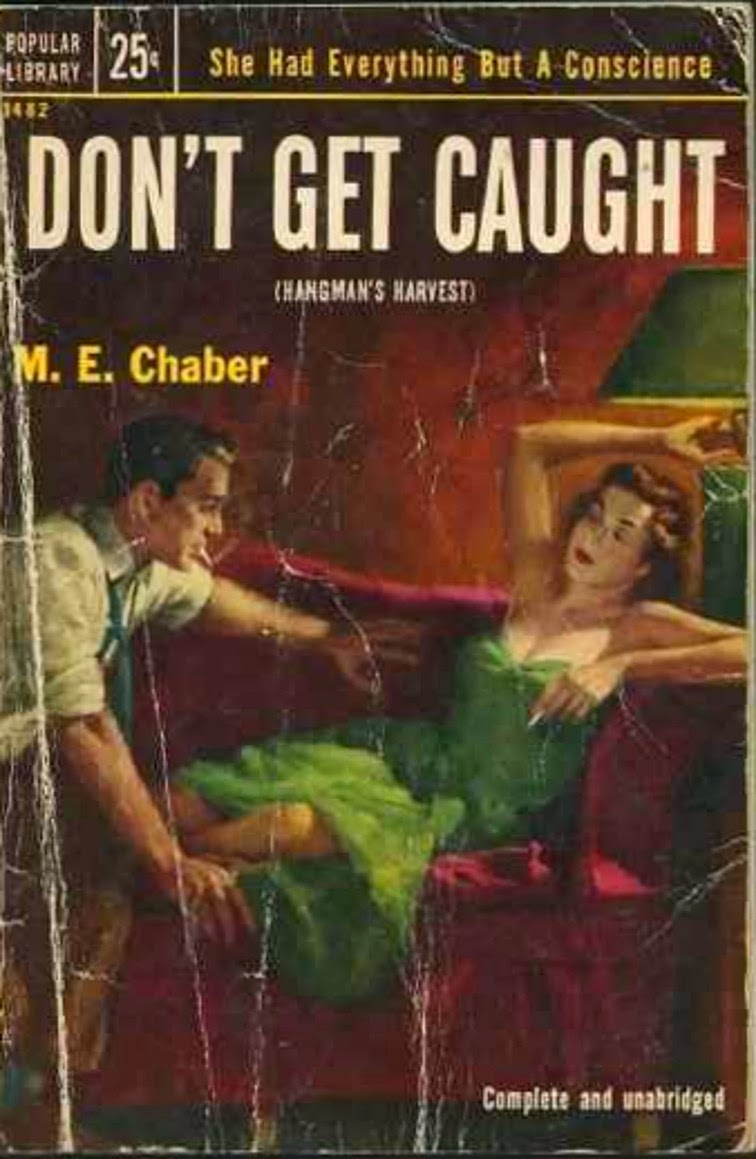 The Milo March series was one of my favorites. Those great McGinnis covers made these books stand out on the newsstand!

Somehow I was able to resist buying all the books in this series, though I was severely tempted by those covers. However, I read quite a few of the March books in other editions and enjoyed them. I've also read a few of Crossen's other books, and they were fun, too.

Unlike Bill, I could *not* resist those covers and so bought all or most of these books. I read quite a few of them and liked them okay, but never rated them to as high a level of other series I discovered during the period they were being issued.

I'm with Wayne. Bought what various fans and critics said were his best, including this one, but sampling a few pages here and there led me to believe that these were pedestrian ideas and flat, bland prose. I may have cheated myself out of a missed gem but I could never work my way through one.

I'd say the March books are about in the third rank of private eye novels for me, with one or two of them (including this one) nudging the bottom of the second rank. I haven't read this one in 38 years, so I don't know how it holds up. I liked it then, though.

I bought and read all of these when they first came out in the 70's. Then they all went away due to my divorce many years ago. So lately I've been buying these up again, just for the covers.

I remember seeing these, but by the time I did the numbers were in two digits, and I always wanted to get them in order, starting with No. 1. Thus I never bought any. From the comments, I may not have missed out too much. I'd have been better off buying the Mike Shayne paperbacks as they came out, I think.

The Mike Shayne books are definitely better. The 70s reprints of the Milo March books were published in a haphazard manner, with no thought of doing them in the order they were published originally. I don't know how they determined which one to do next.

There is the James Coburn look alike on the cover.

And the San Antonio books had a Steve McQueen lookalike on the covers.

Bob, I hadn't thought about the San Antonio books in 40 years! I remember reading one of them, but I must not have liked it much because I don't recall reading any of the others. At this late date, I couldn't say which one it was. Looking at some of the covers on-line, the guy doesn't really resemble McQueen that much, but it could be different on the actual books. I notice that the American editions were published by Paperback Library, too, like the Milo March books.

And now that I think about it, Paperback Library eventually became Warner Books, which published the Renegade series by Ramsey Thorne (Lou Cameron) which had Clint Eastwood look-alikes on the covers.

The San Antonio covers were exactly like the Milo March covers. I don't even know if they ran 6 of them, because they didn't sell very well. But I did feel at the time--don't have ne in front of me right now--that they were trying to do McQueen.

I've been saving Milo one-liners, and Hangman's Harvest had a few good ones: “Long ago I’d come to the conclusion that there are no accidents—that’s why I never have any.” If you can hang on, I'll be reissuing the MM novels along with the final, unpublished book, Death to the Brides.

Kendra, that's great news. I'll definitely pick them up. I haven't read one of the March books for quite a while and look forward to it. I also have the first volume of the Green Lama reprints and hope to get to it soon.