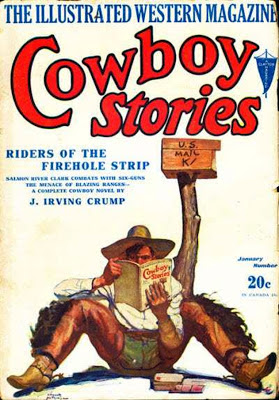 You don't often see this sort of self-referential humor on pulp covers, so this one by Arthur Mitchell caught my eye. COWBOY STORIES was one of the Clayton pulps and lasted about a dozen years in the Twenties and Thirties. The lead novel in this issue is by J. Irving Crump, an author who wrote more for BOY'S LIFE than he did for the pulps. Other authors in this one are S. Omar Barker, Francis W. Hilton, and Glenn A. Conner. I'm not sure I would have picked this one up, but I do think the cover's sort of cute.
Posted by James Reasoner at 7:00 AM

I like COWBOY STORIES when it was published by Clayton in the twenties and early thirties. They often had the best artists and instead of just one illustration per story they used several. Nick Eggenhofer and Arthur Mitchell did some nice covers showing cowboy life. In otherwords the covers were not always shoot 'em ups.

I have most of the Clayton issues but the quality seemed to decrease when Street & Smith took over in the early 1930's.

I like that the subscriber sat right down at the mailbox to read.

...and he's reading the same issue that he appears on!

There may have more but these are the ones I noticed.

Galactic Central is a great place to browse pulp covers, and one of the pleasures of browsing covers is to see how they evolve over time. The 30s and later western covers all see to emphasis gun fights while in the teens and twenties there's as tendency for covers to reflect everyday life in the West. Including things like cowboys reading Cowboy Stories.