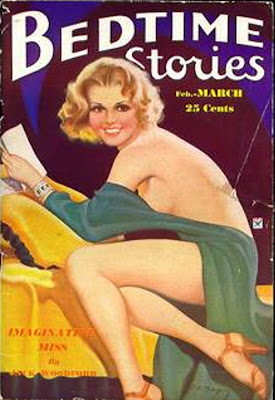 Never having read or even seen an issue of it myself, I can only assume that BEDTIME STORIES specialized in, shall we say, risque fiction. Possibly even peppy, racy, and spicy. All I know for sure is that that Earle Bergey cover is pretty daring for 1935. The only author names I recognize from this issue are Jack Woodford and the legendary Robert Leslie Bellem. Although it wouldn't surprise me if Jules le Vin and Frederic Charleaux, who also have stories in this issue, were Bellem pseudonyms.
Posted by James Reasoner at 6:30 AM

That's what I'm talkin' about!

(Or do you think she's just saying her bedtime prayers?)

For me there's something oddly endearing about old "spicy" mags.

Since the advent of the VCR, DVD and then the net, we've seen a few generations grow up with easy access to "spicy" material roughly 100 million times more explicit than anything in this old stuff.

I've spoken to people in their 20's and 30's who cannot imagine a world in which material like 'Bedtime Stories' was actually considered hot stuff.
But it was.

If she's saying her bedtime prayers, I have to wonder what she's praying for.

her audience seems to be standing upright :-J