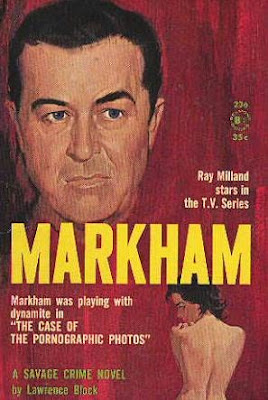 This post originally appeared in slightly different form on April 20, 2007. My apologies for all the reruns. I just haven't had much time to read lately.


This is a book I’ve had on my shelves for many years, and I’ve finally gotten around to reading it. It’s a tie-in novel, based on a short-lived series that ran on NBC in 1959 and 1960, starring Ray Milland as New York-based private eye Roy Markham. Now, if Ray Milland isn’t exactly your idea of a hardboiled private eye, well, I feel pretty much the same way. Maybe a lot of other people did, too, and that’s why the series didn’t last long. This novel didn’t come out until 1961, after the TV series was over. I guess Belmont had it in inventory already and decided to go ahead and throw it out there. Lawrence Block wasn’t a big name at the time, so that wasn’t the reason (as it probably was a few years ago when this novel was reissued under the title YOU COULD CALL IT MURDER, with no mention of the TV series or its original Belmont edition).

As for the book itself, it’s pretty standard PI stuff. As a favor to a friend, Markham takes on a wandering daughter job. The girl has disappeared from the fancy private university she attends in New Hampshire. Markham starts investigating and then gets roped into what seems to be a completely different case – but you know the jobs will wind up being connected, and sure enough they are. There’s a lot of small-town college scenes, some late Fifties/early Sixties hipster stuff, a suicide that might be murder, some other deaths that are definitely murder, blackmail, gangsters, and lots of drinking and smoking. Everybody in this book spends a lot of time taking out cigarettes, lighting up cigarettes, putting out cigarettes, etc. Markham gets hit on the head and knocked out. Eventually he untangles everything and exposes the killer, of course.

Not surprisingly, despite the generic plot Block’s use of language is excellent, as always. Even though this book came early in his career, he could already put sentences together in a consistently interesting and entertaining fashion. I didn’t really see anything in this book that was a precursor for, say, the Matt Scudder books. (There is a minor character named Keller, however.) It’s worth reading, although it’s not on the same level as his other early books that have been reissued by Hard Case Crime.
Posted by James Reasoner at 6:30 AM

Ah, Markham. This was one of two TV tie-in novels I was commissioned to write back in the day, and both series were canceled before the books were published. I was quite the lucky charm. Belmont, as you surmise, just went ahead and published it anyway; Beacon coped with the cancellation of "Johnny Midnight" by having me change character names, and the book came out as Strange Embrace (and was recently reissued in a double volume by Hard Case / Subterranean along with 69 Barrow Street.)

And Markham, I should add, was itself a second attempt. The first time I wrote it, it turned out rather well, and my agent and I agreed it was not to be wasted on Belmont for $1000. I rewrote it as Coward's Kiss, with Roy Markham reborn as Ed London, and Gold Medal published it (with the lame title Death Pulls a Doublecross; it's since been reborn with its original title.) That was all well and good, but I still owed Belmont a book, and Markham—now You Could Call It Murder—was the result.

More, I'm sure, than anyone would care to know about the subject, but you caught me on a wordy day...

Larry,
Not wordy at all, and while I'd read the stuff about the Markham/Ed London connection before, the business about "Johnny Midnight" becoming STRANGE EMBRACE is completely new to me. I have no memory at all of the TV show JOHNNY MIDNIGHT, but looking it up I see that it lasted a full season, 39 episodes back then, and starred Edmond O'Brien. Wonder why I never saw it. It sounds like something I would have watched. Anyway, one more reason to pick up that Hard Case/Subterranean double volume.

James, as I'm a Lawrence Block fan, thank you for the post. I've not read this one yet.

I have read more than a dozen Lawrence Block novels, liked um all! One of my all time favorite authors.