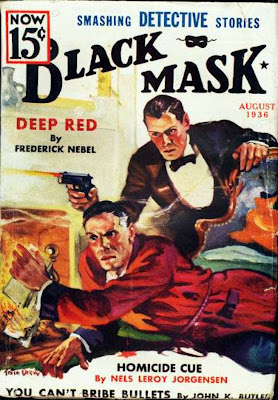 This issue is very close to the end of Joseph Shaw's time as editor of BLACK MASK, 1926-1936. I've heard that he left over a disagreement about salary. After leaving the magazine he worked as a literary agent and edited one of the first, if not the first, pulp anthology, THE HARDBOILED OMNIBUS.

One of the greatest pulp magazines.

Hey, I figured Deep Red had to be a Donahue story by Nebel, but it's not, since the last one in that series showed up in Black Mask in 1935.
Is it a stand-alone? A Kennedy & McBride tale? Anybody know? Walker?

I've been working my way through Tough as Nails, the collected Donahue stories from the impossible-to-overpraise Altus Press. I've been savoring each story like a shot of Pappy Van Winkle's bourbon but I'm still almost done.
Good thing I have four whole volumes of Nebel's Cardigan stories to follow up with.

I wonder what it would have been like to go to the newsstand, drug store or mailbox and get each issue as it came out? The one thing we don't get with the new collections is the other material in the magazines, such as letters, editor's column and so on. I'll bet the faithful read the things cover to cover.

And then what? Toss them in a box? Loan them to a friend? Throw them out and wait for the next issue? Oh my.

John, DEEP RED is a Kennedy and MacBride story and the last one in the series. It seems when Joe Shaw left the magazine, so did Fred Nebel. Around this time he started to really concentrate on his slick magazine career. The pay was alot better but the stories were not as well done as his pulp work for BLACK MASK and DIME DETECTIVE.

When I see this cover I can't help but think "Hugh Hefner, Pulp Hero."

Greg,
There's definitely a resemblance. Wonder what Hef's trying to burn in the fireplace. Or is he trying to save something from being burned?