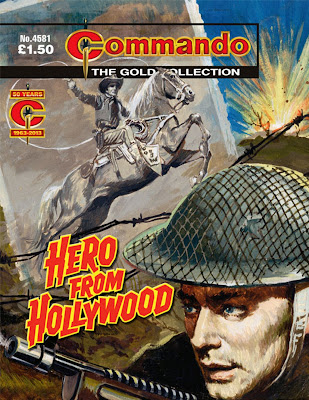 The British digest comic book COMMANDO is probably the longest-running war comic in history. It started in 1963 and is still going strong fifty years later, publishing four issues every two weeks featuring stories of warfare through the ages. Most stories take place during World War II, but certainly not all, and they often feature little-known historical events, as well.

I've read a few issues over the years, including this recent one, #4581, "Hero From Hollywood". It's actually a reprint from the series' first year, 1963, originally appearing in COMMANDO #84. Written by Eric Hebden, it's an excellent yarn about an American movie star of numerous Westerns and swashbucklers, Chet Marvin, who's on a tour entertaining British troops in Belgium in May 1940. Unfortunately that's when the German blitzkrieg starts, and Chet finds himself (and his horse) cut off behind enemy lines.

Fortunately, he pairs up with the story's real protagonist, British army truck driver Joe Brent, who happens to be a big fan of Chet's movies. As they try to avoid being captured by the Germans, however, Joe discovers that movie heroism and real-life heroism are two very different things.

This story covers quite a bit of time as it follows Joe and Chet's odyssey back to safety, and it's packed with action and features several surprising plot twists. I don't know anything about the author, Eric Hebden, but his script is top-notch. The artwork is credited only to "Jones", the cover art to "Alvaro", but I think their work is very effective.

I actually submitted a plot to COMMANDO years ago in another attempt to fulfill my lifelong dream of writing a comic book, but nothing came of it. Maybe I will again, one of these days. In the meantime, I plan to read more of them. I never subscribed because the shipping from England to the U.S. was more than I wanted to pay, but I see that now they have digital subscriptions, which you can check out here if you're interested. Definitely something I might do. (Thanks to Calum Laird and Michael Eriksson.)
Posted by James Reasoner at 7:00 AM

Commando was fantastic, I read it throughout the seventies. Other english war comics worth reading were Battle by Fleetway comics and Warlord by DC Thompson. When the seventies Scfi craze hit, war comics saw a dramatic decline and new comics such as 2000AD (also by Fleetway ) came out.
Commando bound editions are available in the UK, whether you can get them in the US I don’t know.

Amazon also sells compilations of some of the issues - I've got a compilation called "True Brit" that's pretty great.

A digital subscription...hmmm. I might have to look into this!

That sounds like a lot of plot to shoehorn into a comic book! How many pages are these? Sounds like it would make a good novel.

UK author Max Adams actually wrote a very similar plot in his novel "Do or Die". The character isn't a movie star, but rather a pair of Tommies who get caught behind enemy lines and have to make their way back.

Jack,
Thanks for the tip on those Commando compilations. I'm definitely getting some of those!

Rick,
The issues are 64 pages, I believe. And they move really fast, too.

I've always thought of the British "pocket libraries" as being the original graphic novels. They began in the early 1950s as soon as the wartime paper shortage was over. Western, detective, historical, and romance were among the genres published. The UK's first war-themed comic series was War Picture Library launched in September 1958 by the Amalgamated Press, of Fleetway House, Farringdon Street. In March 1959, an under-capitalized company founded by two former AP staff began its Combat Picture Library, giving the London giant some commendable early competition. The AP's main rival, D. C. Thomson, of Dundee, didn't dip its cautious toe into the 64-page war-library water until July 1961 but, as you note, its Commando series is the only one that still survives today.

I was never the greatest reading fan of war comics, but I have a soft spot for them probably because my first three published books each appeared in Combat Picture Library and for a while I became Combat's editor (along with editing several other Micron Publications as was the busy nature of backstreet publishing). More of the background story is told in the article "Told In Pictures" which will appear shortly in the Spring edition of the quarterly magazine Illustrators (Book Palace Books, London).

I can't help but feel some small need to do a little dance over the fact that one of the folks who read my first Commando novel called it "a Commando Comic in prose form". As much as I enjoyed those I've read, I consider that high praise indeed.

A couple of years ago, I bought a bunch of early COMMANDO comics for Rs.5 each (Rs.50 = $1) and I'm still holding on to them. I enjoy reading the WWII stories revolving around North Africa and the Middle East, rare as they come in these comics.

I, too, have been a long time fan of Commando (and other similar comics - Air Ace being my favourite) and I still have boxes of them. I'm amazed at the prices they go for on ebay.

The compilations are great value.