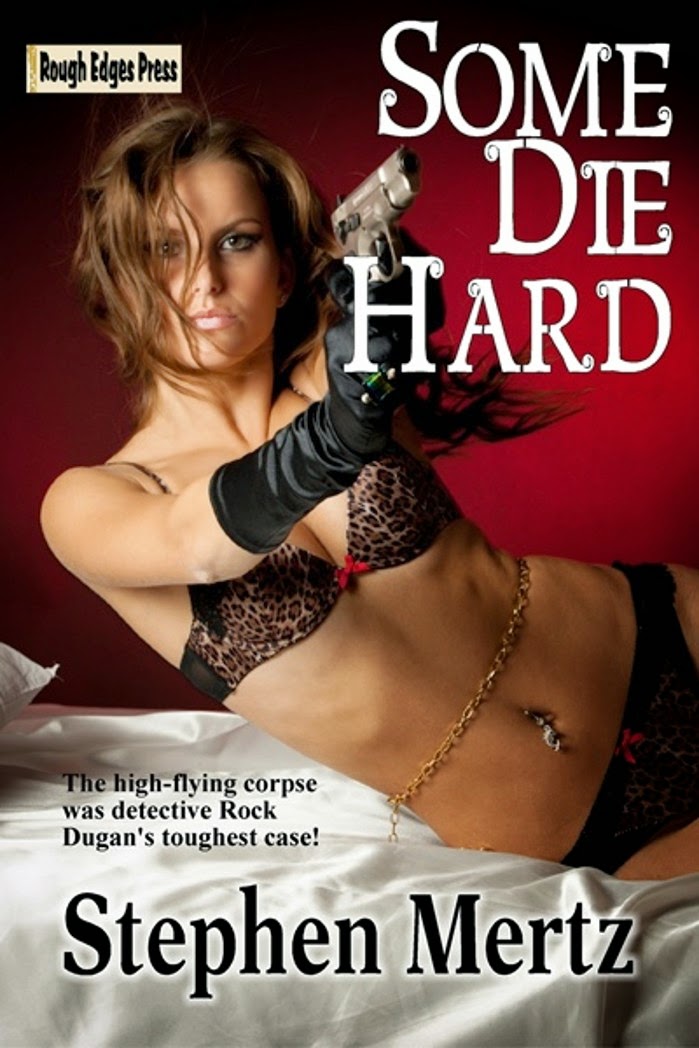 Dead man flying! Ex-stuntman and private detective Rock Dugan faces the toughest challenge of his career. How was his wealthy client murdered while flying alone in a sailplane, in full view of all the suspects in the case? How will Rock survive when gangsters and crooked cops want him off the case? Which of the beautiful women involved in his client's murder can be trusted—and which may turn out to be deadly?

SOME DIE HARD is legendary mystery and thriller author Stephen Mertz's first novel, originally published in paperback more than thirty years ago and long out of print. Part hardboiled private eye yarn, part classic novel of detection (with a locked-room mystery unlike any other), SOME DIE HARD is pure entertainment, and Rough Edges Press is proud to make it available once again. This edition includes a new afterword by the author.

"Stephen Mertz writes a hard-edged, fast-paced thriller for those who like their tales straight and sharp."
--Joe R. Lansdale

There was something about him right from the start. We nodded to each other the way strangers will on a bus, but there was more to it than that. He was sizing me up with eyes that were nervous but didn't miss a thing, and he seemed to make up his mind about something before he actually took the seat. I didn't think much of it at the time and that was the only point when we made eye contact. After that it was like I wasn't there.

He had other things on his mind.

He was somewhere in his early fifties, thin and wiry, with a look that said life that given him a hard time. He'd hung on, but the struggle showed. It showed in the lines which Time had etched into his narrow face and in the perpetual squint of those nervous eyes that now darted up and down along the rows of passengers, seeming to catalogue everyone's position and tuning in instantly on every unexpected movement. The one time on the trip that someone came back to use the head, my seatmate tightened up to the point where I could almost smell his fear.

The bus made good time out of Langdon Springs and after awhile he somehow managed to calm down a bit. But a bit wasn't enough. There was still just enough of that undercurrent of nervous energy about him to be noticeable, and dissettling. For the most part, though, I was able to ease him out of my mind, thanks to Erle Stanley Gardner. I'm a mystery fan, have been since I was knee high to the Hardy Boys, and I'd brought along a Perry Mason paperback that I'd somehow never got around to. Everything Gardner ever did is topnotch and this one was no exception. The Colorado scenery seemed to fly by.

It was three-forty when we pulled into the Denver metro terminal. There's a particular type of fatigue that travel breeds and, as I slipped the book into my coat pocket, I realized that it had me in its grip, but good. The fatigue, that is. I felt woozy, groggy. But Duffy's Shamrock Inn, a very good, very Irish little restaurant, is just across from the depot. There was still time for a drink and dinner before the supper crowd hit, and I'd be good as new.

So as the bus pulled to a stop and the wiry guy beside me got up on his feet, I reached overhead for my suitcase and that's all I was thinking about: Duffy's, food and home.

The mass of boxed-in humanity inside the bus moved snail-like toward the front door; toward the friends, families and various welcoming parties that milled about on the sidewalk and loading apron outside.

My erstwhile traveling partner was in front of me. I was bringing up the rear.

The semblance of calm which he'd worn through roughly the last half of the trip had given way to the nerves again by the time I-76 joins I-25 north of the city for the freeway assault into downtown. The wiry man was a tensed bundle of nerves. The tension was ready to explode. I couldn't ignore it any longer.

We were moving past the driver's seat now, down the steps. The crowd outside and below had begun dispersing, returning to the pace of their everyday lives.

The man before me took two paces from the bus.

Then he saw them.

They'd been loitering beside a mirrored cigarette machine, about ten yards to our left. They were dressed casually. Two guys passing the time of day. But their eyes had been on every face alighting from the bus.

They saw the man, and the man saw them, at the same time. They pulled erect and moved forward. The one on the right was hellaciously huge, with a mean pockmarked face.

They might have been cops but I didn't think so.

The man in front of me surprised me at first. I thought he'd be ready if trouble came. But the first thing he did after he saw them was to turn around and try to make it back into the bus. He thudded into me and for a moment I could see his lean face, pulled and frozen with panic. Then he regained his senses. He took off running along the side of the bus. Away from the two men.

To my left, the two guys also broke into a run. They whipped past me. They were pushing and shoving people out of their way as they took off after the first man.

I heard myself sigh. Okay, Dugan. Forget about Duffy's, food, and home.

I dropped my suitcase and I started running, too. I came out through the front entrance right on their tails.

Posted by James Reasoner at 6:50 PM

That's an excellent cover. Hope it drums up some business for you all (photographer and model both credited?)...and you've got me thinking I should definitely give this novel a try.

Hah. Manor Books no less. The apparently mobbed-up distribution in NW Connecticut of my youth always made sure there were Manor Books in the drugstore spinner racks where I picked up my inconsistently delivered comics magazines (Charlton as well as DC and Marvel and all), and the occasional paperback (including at least one Manor, the pb editions of Harry Harrison's originals anthology NOVA 4...which was nicely turned out, given the budgets they weren't paying anyone I'd bet, with an interesting looking running header on the pages, etc.

The cover image is one that Livia bought somewhere, so I have no clue about the photographer or model. I agree that it's a fine cover, though. When she showed it to me, I said, "If Steve doesn't want it for his book, I'll have to write a book to go with it!"