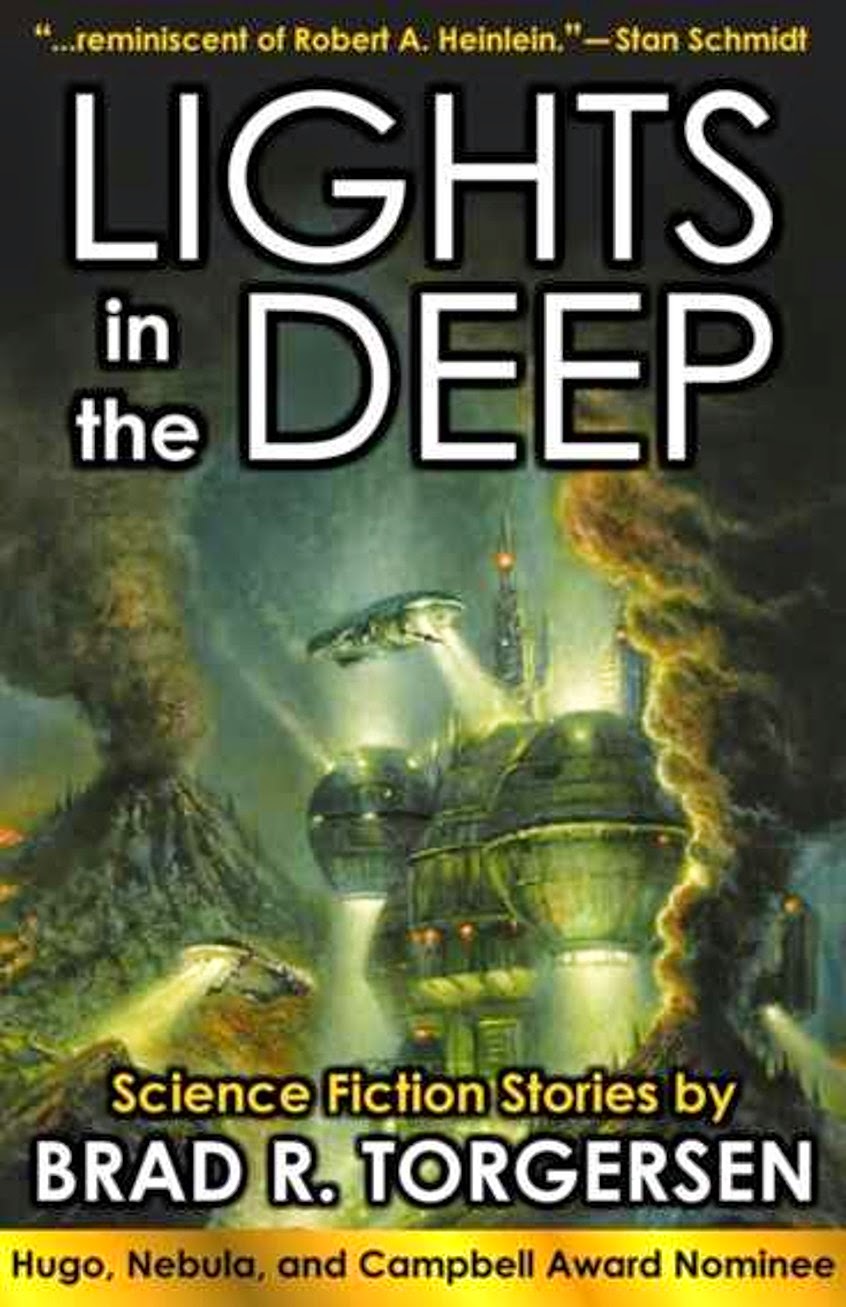 I've been vaguely aware of Brad R. Torgersen's name for several years now and knew he's a science fiction writer, but I'd never read any of his work because I just don't read much modern SF. I'm trying to change that, so I picked up LIGHTS IN THE DEEP, the first collection of Torgerson's stories, including two that are nominated for the Hugo Award this year and one that was nominated for the Hugo and the Nebula Awards a few years ago.

Torgersen writes what I'd consider classic-style science fiction, stuff that has both big ideas and the more personal stories resulting from those ideas, and this collection includes stories with a wide variety of settings and themes. "Outbound", his first professionally published story, is a generation ship yarn about the survivors of a war that destroys the solar system trying to catch up to ships that set out earlier to establish interstellar colonies. "Gemini 17" is an alternate history story about the U.S. space program after the failed assassination attempt on John F. Kennedy. "The Bullfrog Radio Astronomy Project" ventures into "Men in Black" style comedy about an unusual effort to search for extraterrestrial intelligence. "Exiles in Eden" finds sentient spaceships programmed with human intelligences fighting a desperate battle to save the last survivors of humanity from an alien race that has wiped out everybody else. "Footprints", which appeared in a college literary magazine and was Torgersen's first fiction to see print, is a poignant story about a little girl who wants to grow up to become an astronaut.

The highlights of this collection are his Hugo-nominated stories. "The Exchange Officers", which is nominated for Best Novelette, is a fine piece of near-future military SF about an American/Chinese clash over an orbital docking platform. "The Chaplain's Assistant" and "The Chaplain's Legacy" (nominated for Best Novella) manage the difficult task of being large-scale space operas about interstellar war between humanity and a race of insect-like aliens, while at the same time being very effective small-scale personal stories about religion and human/alien interaction. They form the first part of a full-length novel coming out this fall, THE CHAPLAIN'S WAR. I have an ARC of that and plan to read it soon.

The rest of the book is rounded out by "Exanastasis", a far-future tale about the survivors of humanity returning to an Earth where computer intelligences are all that still exist, and "Ray of Light", which was nominated for both the Hugo and the Nebula Awards as Best Novelette in 2011. It deals with the aftermath of an alien-orchestrated natural disaster that forces the few survivors of humanity to live in habitats at the bottom of the ocean. This may well be my favorite story in the whole book. It's certainly the most inspirational.

Torgersen also intersperses a number of essays about his writing career among the stories, and that's the sort of thing I always enjoy. I think this is a really fine collection and some of the best science fiction I've read in recent years. This one is going to be a strong contender for my Top Ten at the end of the year. Highly recommended.

I don't read much current SF, either, but this does sound appealing.

Like you guys, I don't read much current SF(John Scalzi comes to mind). I may give this one a try sometime soon.

I had read a couple of the stories in here before I read the collection. When I reviewed the book last year to review for Amazing Stories, I was impressed how well Torgersen blended the scientific concepts with the human concerns. He's become one of my favorites.

And how did you manage to score and ARC of THE CHAPLAIN'S WAR, and more importantly, how can I get my hands on one?

Bill, I think you'll like this one. The stories are very much in the vein of the classic sf of our younger days.