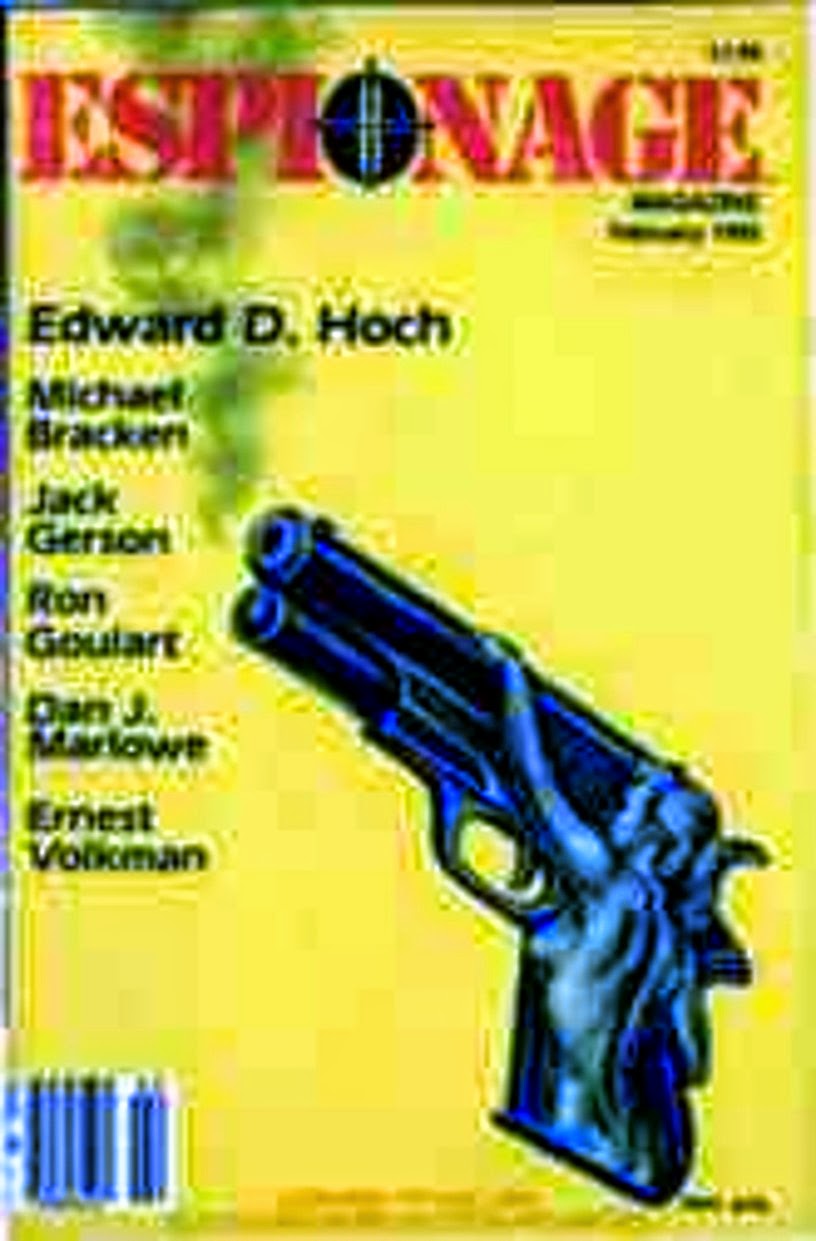 Like MYSTERY MONTHLY, which I wrote about several weeks ago, when I saw the digest magazine ESPIONAGE on the magazine rack at one of the local grocery stores, my first thought was that here was another market I could send some stories to. The mid-Eighties were a dry time for me as far as writing goes. I ghost-collaborated on a couple of men's adventure novels with a friend of mine. I wrote short stories and letters for the porno digests (and was damned glad to get those 40 or 50 buck sales, too). I wrote novel proposal after novel proposal in a variety of genres, all unsold and lost now, except for one or two. I was still a year or so away from getting the job writing Westerns for Book Creations Inc. that eventually allowed me to become a full-time writer.

So I immediately wrote a slew of spy stories and bombarded the magazine with them. Never even came close to selling any of them, of course. They all came flying back with form rejects. I don't know if any of them were actually any good or not. They're all lost, too.

But I still picked up the magazine when I found it and read the stories, and most of them were pretty good. This issue includes stories by Dan J. Marlowe, Ron Goulart, Edward D. Hoch, Michael Bracken, Bill Knox, and John Lutz. That's a top-notch line-up. The other issues I read were good, too. Several of them feature stories by Joe Lansdale. Despite its quality, the magazine lasted only a year or two, victim of the fact that even in the mid-80s, people just didn't read fiction magazines much anymore.
Posted by James Reasoner at 5:30 AM

I picked these up when I saw them, too, but distribution was spotty around here. I never saw the pictured issue, for instance.

I don't think I ever saw that one. A shame, too.

Interesting you linking this one to MYSTERY. I don't know about corporately, but substantially they were pretty much the same: not open to newbies and editorial policies bland in the extreme. Not the stature of EQMM and AHMM but not that pulpy edge of MSMM and the cheaper digests like OFF-BEAT, etc. Bland stories, bland movie reviews, bland book reviews. For my money the only thing ESPIONAGE provided that was worthwhile is Mike Nevins' substantive interview with Philip Atlee, author of the Joe Gall series, which they ran in one of their issues. That was an excellent piece of work.

I saw the first issue, but I don't recall if I saw any others. I know I never saw the one you've posted. The drug store where I bought the first one was only open for a few months before closing, and nobody else in my small town carried this one.

The 80s were a dry time indeed for the short fiction markets, at least the ones I was able to find.

The story in this issue is one of two of my spy stories appeared in Espionage during the magazine's brief life, and a third had been accepted before it ceased publication.

Jackie Lewis, the editor/publisher, and her twin sister Jeri Winston, the associate publisher, are Bob Guccione's sisters. (You should recognize him as the publisher of Penthouse.)

Prior to starting Espionage and continuing after Espionage's demise, Jackie was editor/publisher of several digest-sized sex magazines that consisted mostly of "letters" from readers that were written by professional writers. (I was one of them.)

Learn a little more about the magazine's beginnings at http://articles.chicagotribune.com/1985-02-22/features/8501100834_1_bimonthly-publication-penthouse-science-fiction

Interesting stuff, Michael. Thanks for the link. I wrote for those "letters" magazines, too.

The editors of this wrote to me when I was doing MDM. They wanted me to carry fliers and in exchange I got a free sub. I pretty well knew it was doomed from the start but it cost me nothing to help them out so I figured what the hey. And I always hoped Guccione would send one of his pinups to my place to personally thank me. Dreamer.

Wow. How things all come 'round again. You'd've thought Gooch would've lent a hand with design to his sisters, since the weakest aspect of the magazine (aside from distribution) was the clumsy design and bad covers.

L'il Guccione's magazines at least looked stylish, even when thin in content, and I believe SPIN is still with us, from another publisher (may be wrong).

Was any of your PENTHOUSE LETTERS or FORUM or similar work good enough for you to want it reprinted? Certainly Silverberg and others were placing some good work with them, which I only realized with the advent of Suzie Bright's BEST AMERICAN EROTICA annual...

WIKIPEDIA: Spin is a music magazine founded in 1985 by publisher Bob Guccione Jr.. The magazine stopped running in print in 2012 and currently runs as a webzine.[3]

Todd,
No, none of that stuff I wrote for the porn digests is worth reprinting. I only sold to the lower-rung markets, and a lot of it I never saw in print. I used to have copies of a few of them, but they were all lost in the fire of '08 along with my records of the sales, so I wouldn't even know where to start looking for any of it. The actual short stories I wrote for DUDE, GENT, and NUGGET (and one sale to CAVALIER, from the same company) were okay for what they were but not worth bringing back into the light of day. At least all of them appeared with my Jay Morris pseudonym on them. The digest editors usually changed whatever pseudonym I put on the manuscripts and sometimes the titles as well, adding to the impossibility of tracking them down.

I guess I do have all the issues of Episonage Magazine. In 1985, I was back in Japan and I believe I subscribed to that mag mainly because of Ed Hoch's stories.

If I ever collect any of those '80s issues, I'll look for the Jay Morris byline.

Susie Bright, as I should've written.