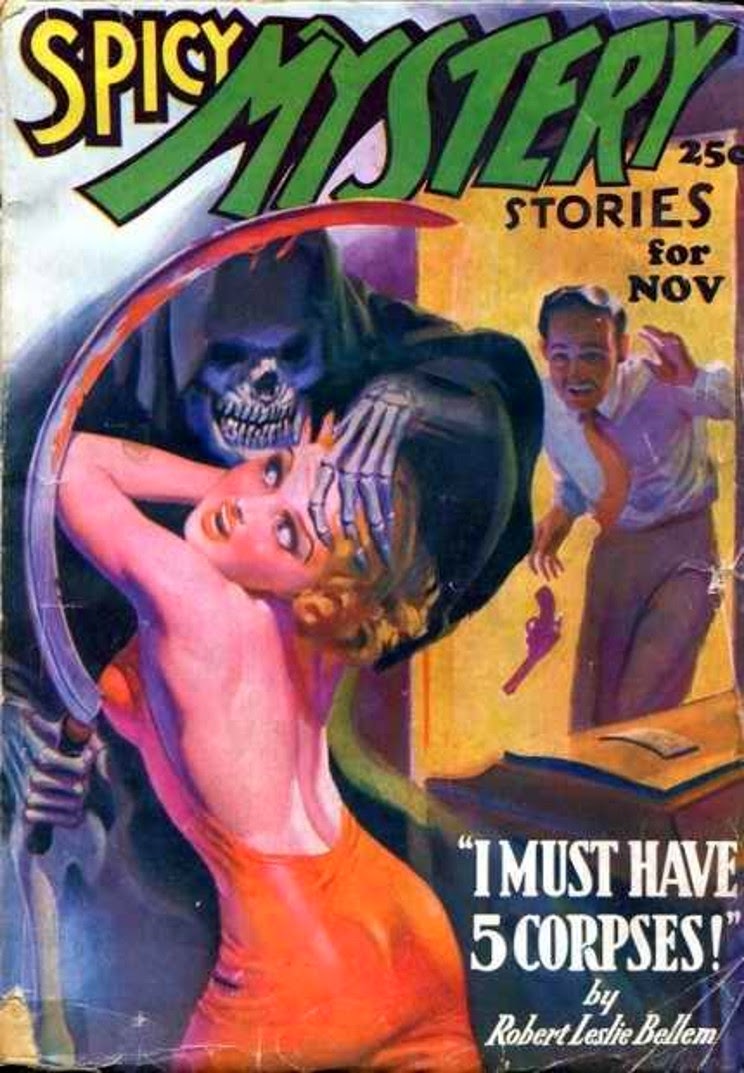 From the November 1936 issue of SPICY MYSTERY comes "Zombie" by Carl Moore, who was really prolific pulpster Edwin Truett Long, as Jeff Shanks explains in his introduction. Long is best known for his mystery series featuring Doc Harker, a traveling snake oil salesman who also solves crimes. I know several people who are fans of the Doc Harker series, but I've never gotten around to reading any of them myself. In fact, "Zombie" may well be the first thing I've read by Long. I found some things to like in it, and some things more, well, problematical.

As for the good stuff, "Zombie" is pretty well written. Set on a plantation in Haiti, it's very atmospheric and the pace moves along quickly. It's a romance, in a way, about the triangle involving the plantation owner, the native girl with whom he's gotten involved, and his fiancée who's arriving from the States. The native girl takes offense to the fact that the plantation owner is planning to end their affair, and she turns to voodoo to have her revenge on him.

Not surprisingly, there's quite a bit of the casual racism of the times in this one, maybe more than in the others I've read so far. Normally this doesn't bother me much because I don't believe in holding fiction from the past to modern standards, but Long goes a little overboard even for the time period. I also didn't care for the way the story played out. I thought the author was headed one way with the plot but he wound up doing something else. Usually I don't quibble about that—hey, it's the author's story, he can do whatever he wants—but this time I think he missed some good opportunies for plot twists that he set up and then didn't do anything with. That bothers me a little.

All that said, "Zombie" is certainly a readable story and I liked more about it than I didn't. It's just not as good as most of the other stories I've read so far in ZOMBIES FROM THE PULPS.

Email ThisBlogThis!Share to TwitterShare to FacebookShare to Pinterest
Labels: Jeffrey Shanks, zombies, Zombies From the Pulps

I have to admit that the best thing about the entire Spicy line of magazines were the covers. I've always had problems with the stories especially when they stop the story to spice it up with some tame sex scene. But the covers, like this one, could be truly bizarre and sinister.