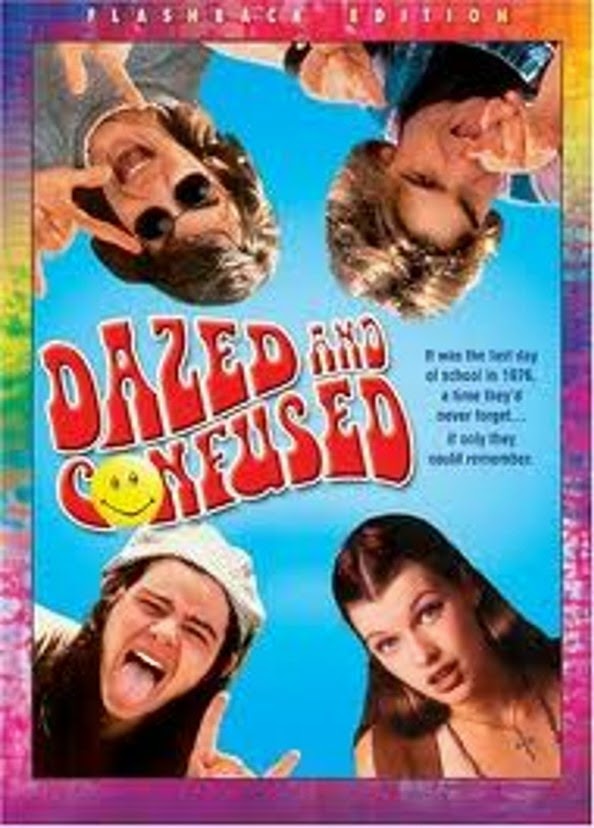 I graduated from high school in 1971, which means I’m a little older than the characters in this movie that takes place on the last day of school in 1976. The emphasis is on that year’s juniors, who will be seniors the next year, and the eighth-graders who will be the incoming freshmen. To make the film resonate even more with me, it takes place in Texas and was filmed in Austin.

Those of you who know me now probably won’t be surprised to hear that I wasn’t one of the cool kids in high school, nor was I a stoner. But I knew plenty of both sorts and everybody in between. I’ve been to a lot of the same sort of places and witnessed the same sort of stuff as you’ll find in DAZED AND CONFUSED – although some of the rituals, such as paddling the incoming freshmen, never went on at all in the town where I grew up.

There’s not much plot in this movie. The characters just sort of amble along. Things happen to them, of course, but in most cases they don’t add up to much. With a couple of exceptions, the characters are all the same at the end of the movie as they were when it began. Of course, that’s somewhat realistic. Dramatic changes in people’s lives sometimes do happen suddenly, but for the most part change is a long haul, an evolution rather than a sharp turn.

Admittedly, part of the fun in watching DAZED AND CONFUSED for the first time at this late date is looking for people who went on to become more famous for their roles in other movies and TV, like Matthew McConaughey, Ben Affleck, and Adam Goldberg. I looked for Renee Zellweger (“Girl in blue pickup”, as she’s credited on IMDB), but never saw her. The soundtrack is also great, especially for people who grew up in that era.

In the spirit of full disclosure, several of the people who were watching this movie with me didn’t care for it at all. ("That's two hours of my life I'll never get back" was one comment.) I thought it was great and thoroughly enjoyed it. Maybe that was because I felt like I knew everybody in it. I’d never go back to my high school days, mind you, but it was nice visiting them for a couple of hours.
Posted by James Reasoner at 5:30 AM

I'm not usually fond of "slice of life" movies, but this one was pretty much a slice of my own life, so I was a little stunned by it. Over and over it showed me things I hadn't seen or thought of in 30 years.

A lot of people I know took Dazed & Confused as a sort of comedy, but it had the opposite effect on me.

This is truly a great little movie and fun to see how so many of them went on. Looking forward to Linklater's new movie.

I like it too, but as has been said many times before - it owes quite a lot to AMERICAN GRAFFITI.

Yes, it does, and AMERICAN GRAFFITI is a much better film, although the last time I watched it I thought it doesn't hold up quite as well as I hoped it would. It still has some of my all-time favorite scenes in it and the ending gives me chills, as it always has.

Another similarity is how many of the actors in each movie became famous later on. Why Paul Le Mat did not have a bigger career is beyond me.