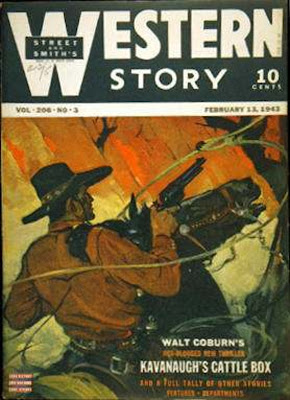 This is another pulp that I own and read not long ago. Normally with pulps that I own, I try to use a cover scan from the actual issue that I read, but I'm having problems with my scanner so I had to get the image accompanying this post from the Fictionmags Index. The cover is by H.W. Scott, who did so many covers for WESTERN STORY during this era.

The lead novella is by Walt Coburn, who did some of his best work for WESTERN STORY during this era. The protagonist of "Kavanaugh's Cattle Box" is young cowboy Smoky Rutledge, who spends a year in Yuma Prison for a murder he didn't commit. After being pardoned he returns to his home range to avenge his father Keno, who is missing and thought to have been murdered by his former partner Shane Kavanaugh, who now owns a ranch in a big box canyon on the Arizona/Mexico border. The man Smoky supposedly killed was Pat Kavanaugh, Shane's son, but it's possible he's still alive and hiding out below the border. Then there's Shane's outlaw brother Bob and his son Jiggs, and Smoky's old friend, bronc buster Rusty Britten, who now has a secret of his own, and the Spurlock cousins, Grant and Tom. Not to mention beautiful redheaded cowgirl Chacha Kavanaugh, who either loves Smoky Rutledge or hates him.

In many ways this is a prime example of a Walt Coburn story. There's so much back-story and so many characters and plot twists coming at the reader so fast that it's easy to get lost. But the whole mad whirl is spiced with cow country authenticity and great over-the-top action scenes, and then by some miracle Coburn ties everything together and it somehow makes sense. You can't really analyze a Walt Coburn story. With the good ones, you just sit back and let it carry you away and enjoy it. "Kavanaugh's Cattle Box" is a pretty good one.

Moving on to the short stories, "The Battle at Bull Creek" is by Tom W. Blackburn, one of the most dependable contributor to the Western pulps. This "homesteaders and small rancher against evil cattle baron" yarn really shows the influence of having been written during the early days of World War II. There's a lot of talk about sticking together and standing up for your neighbor. The thing is, I'm not sure if this angle was deliberate on Blackburn's part or just a product of the times. It's a minor but decent story, well-written as all of Blackburn's stories are.

Wayne D. Overholser is another long-time pulp author who went on to a sterling career as a Western novelist. "Pasear to Death" is set in Oregon, as many of Overholser's stories are, and finds the protagonist returning to the town where he grew up to seek revenge on the man who killed his father and brothers. The thing that sets this story a little apart from what you might expect is that the hero is opposed to gunfighting and sets out to settle the score in a different way. Overholser, like Blackburn, is a steady, dependable author who usually entertains, and that's true here.

Archie Joscelyn wrote scores of stories for the pulps from the Twenties through the Fifties but was probably better known for the many novels he wrote under his own name, his primary pseudonym Al Cody, and a few other names. He doesn't have much of a reputation anymore, but I've always enjoyed his work and have read half a dozen of his novels that were excellent. His story is this issue of WESTERN STORY is "Death on Parade", which finds Lieutenant Jim Saunders assigned to find out what happened to a missing cavalry patrol. Saunders' search, of course, leads him into danger and the middle of an outlaw scheme. I'm not sure the plot completely makes sense, but the story has some nice touches, including a sympathetic portrayal of some Indians who are involved.

This issue also has an installment of a serial by Bennett Foster, "Man Tracks", an animal story by Jim Kjelgaard, "Cougar Trail", and the usual columns on guns, travel, and mining, plus the pen-pal column "The Hollow Tree". It occurs to me that in this day and age some of you may not be familiar with the concept of pen-pals. Think of it as Facebook that loads really, really slowly.

Overall, this is a solid but unexceptional issue with enough good stories that I'm glad I read it, if for no other reason than for Walt Coburn's distinctive brand of Western storytelling.
Posted by James Reasoner at 6:30 AM

I've been reading some Walt Coburn stories lately from the collections edited by Jon Tuska. These are mainly stories from the 1920's that appeared in LARIAT STORIES and other Fiction House pulps. I do see a difference in quality between this earlier work and the later work for WESTERN STORY. Often the WESTERN STORY fiction is better written and more believable than the Fiction House stories. So far I've have not read one of the really poor Coburn efforts which he occasionally did write while having a few drinks.

Oh my this does seem to be a good issue. Wish I could go buy a copy at the newsstand.

Only after seeing more '60s issues did I realize the senior Coburn was a regular contributor to True West. Your description of his fiction holds true with the essays I've read, often equally bewildering and enjoyable.

Only after seeing more '60s issues did I realize the senior Coburn was a regular contributor to True West. Your description of his fiction holds true with the essays I've read, often equally bewildering and enjoyable.