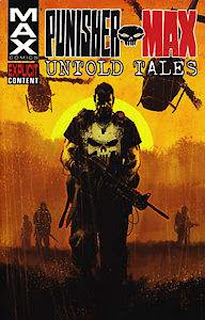 I remember buying the issue of THE AMAZING SPIDER-MAN in which The Punisher made his first appearance. Even then I knew, hey, this guy's an Executioner rip-off. And all these years later, it's still sort of true, but I don't care. Frank Castle has become an interesting character in his own right, and I enjoy reading about him.

Until now, though, I hadn't read any Punisher stories from Marvel's Max line. These are their more adult comics, which means, of course, that the violence is more graphic and there's more cussin'. I picked up PUNISHER MAX: UNTOLD TALES not only out of curiosity but also because two of the five stand-alone stories in this trade paperback collection were written by people I know, Jason Starr and Megan Abbott.

Starr's story, "Jimmy's Collision", leads off the volume. That's the name of the business run by the story's protagonist, who has a gambling problem and an even bigger problem when his bookie offers him a way out that involves murder. As in his novels, Starr skillfully ratchets up the tension as Jimmy makes bad decision after bad decision that eventually wind up involving The Punisher in his life, which is hardly ever a good thing.

Megan Abbott, with her history of writing domestic noir, may seem like an odd choice at first to write a Punisher yarn, but her story, "The Ribbon" is excellent, a morality play about a doomed summer romance and a fateful encounter at a bus stop. Like "Jimmy's Collision", it's a story about how decisions come back to haunt us, sometimes with tragic results. And as you'd expect from Abbott, the writing is both terse and graceful.

The other stories include "Where the Devil Don't Stay" by Jason Latour, in which The Punisher encounters a family of murderous Tennessee hillbillies; "Manhunt" by Nathan Edmondson, a more traditional tale about The Punisher taking on a ring of gangsters that deals in sex slaves (there's a fairly nice twist in this one); and "A Little About Revenge" by Skottie Young, an offbeat story in which not a shot is fired, making it a real rarity for a Punisher tale.

I haven't said anything about the art. Each story has a different artist, none of whom I'd ever heard of. Some of the art I liked fairly well, some I didn't care for. That's pretty much par for the course in modern comics.

Of the five stories, the best two are by Jason Starr and Megan Abbott. No surprise there. But the other stories are good, too, and the entire volume is well worth reading. I don't really need anything else on my plate, but I may have to find some more of these Punisher Max collections.

Posted by James Reasoner at 1:52 PM

So glad you liked Megan's story. Not knowing the genre at all, I didn't know if it fit in or not.

Well, it wasn't exactly a typical Punisher story, but most of them in this volume weren't. It certainly worked for me.

Garth Ennis' run on "Punisher MAX" was consistently entertaining. Unfortunately, the art was pretty hit-or-miss, but the writing was always rock-solid. Ennis finally found a worthy collaborator, Croatian artist Goran Parlov -- the guy is AMAZING, like a cross between Toth and Garcia-Lopez. I'd highly recommend the "Punisher MAX : Barracuda" TPB, collecting the first Ennis/Parlov story arc.

I agree about Parlov's art. I enjoyed it on the Nick Fury MAX series called "My Wars Gone By", which was also written by Ennis, I believe. I'm definitely on the lookout for more Punisher MAX volumes.