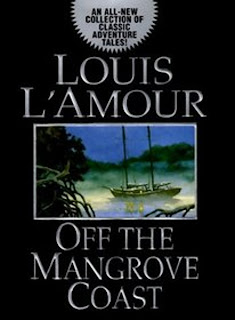 (This post originally appeared in different form on December 13, 2004.)

A while back on the WesternPulps Yahoo group, we were talking about Louis L'Amour's short story collections, and I just read one of the more recent ones, OFF THE MANGROVE COAST. This is an excellent book with a good cross-section of L'Amour's work. There's only one Western story, but it's a very good one: "Secret of Silver Springs", from the November 1949 issue of RANGE RIDERS. There are two boxing stories, a couple of South Seas adventures, a hardboiled private eye yarn, and a story of revenge in Paris following World War II. Some are pulp stories that were never reprinted until this collection, and others were evidently published here for the first time. As usual in L'Amour collections, there's no bibliographic information, leaving the reader to dig out such things if they're of interest. There's not a bad story in the bunch, though, and some of them are very good. I've felt for quite a while that L'Amour was a better writer at shorter lengths than he was as a novelist, and this book confirms that, at least in my opinion.

I've come to agree with you on L'Amour's shorter stories and novellas. That's where he shines.

There have been several short story collections. Were these in any of those 7 volumes?

Yeah, I'm sure they're all in those "Collected Stories" editions, although they might be scattered through several different volumes. Without having the books in front of me, I'd guess that most of them are in Volume 4, THE ADVENTURE STORIES. Some could be in Volume 6, THE CRIME STORIES. I think in any L'Amour short story collection there'll probably be a fairly high percentage of stories worth reading.

Interesting! The story collections are the most-read among the L'Amour paperbacks I own. My favorite is possibly Dutchman's Flat. The stories are tight and focused and the author's foreword, in which he rails against unauthorized reprints of his work, is a gem.

Interesting, too, that L'Amour is now drifting into the Forgotten Books category. During the closing decades of last century, his paperbacks seemed to be everywhere -- at least from my distant point of observation. Meanwhile, other former writers for the western pulps were largely ignored. Their books were not reprinted ad infinitum with new covers; nor were they afforded generous shelf space in the shops. It was as if the entire book trade had decided L'Amour was the only western writer from the pulp age worthy of promotion.

So many others have sadly and unjustly faded into obscurity. At Mystery File recently, Walker Martin reported, "Pulp reprint publishers have told me that western fiction does not sell as well as the hero pulp and detective reprints." Perhaps that's the answer.

These days I can't really afford the average $10 plus $20 US-to-NZ postage for copies of western pulps at eBay. Fortunately, I do have a collection of western books bought in earlier times that still entertain me on re-reading.

To digress a little further, a more truly forgotten writer who comes to mind is the prolific pulps contributor Frank C. Robertson. During my English boyhood, his western novels were available in UK editions published by Collins. But just this past week, I've been re-reading a couple of his magazine novels from the 1920s and '30s that were republished in the 1950s in slim pocket-book editions and small type by C. Arthur Pearson Ltd, London, under Robertson's "Robert Crane" pseudonym. I don't know if they had equivalent reissues in the States. If they didn't, they should have! When I first read them, I had no idea of their ancient origins. And The Clean-Up on Deadman (Short Stories, 1924) and Six-Gun Challenge (Ranch Romances, 1932) still read well today. If I had a blog, they'd be high on my list as Friday's Forgotten Books.

I have several of the recent hardback series of "Collected Stories" by L'amour. I tend to agree with you that he was at his best in the short story form. I especially get a kick out of his "Indiana Jones" style pulp adventure stories, featuring recurring heroes like Ponga Jim Mayo and Turk Madden.

Keith,
Interesting comments! I've read some of Frank C. Robertson's novels and enjoyed them. I first became aware of him when I read his Have Gun Will Travel tie-in novel in the early Sixties and had no idea then that he had a long pulp career as well. He's in a bunch of RANCH ROMANCES issues in the Thirties. I agree that any of his books would be a good candidate for a Forgotten Books post. I may have to think about that. There's one copy of SIX-GUN CHALLENGE for sale on ABE and I'm tempted to buy it, but it may be a little too pricey. None of the libraries around here have any of his books anymore.

Jeff,
I like L'Amour's adventure yarns, too, especially the Ponga Jim stories. It's best to space them out because they get a little repetitious, but that's true of all of his stories. And of a lot of other writers as well.

I have a very large collection of L'Amour - and he is still stocked in the local bookstores in India.

Which is more than I can say of JT Edson or the Longarm series - those are fast disappearing off even library, second hand and flea market bookshelves in India.

L'Amour books keep getting reissued too, as you can see from the cover you posted. Which most other westerns aren't. I would hardly call them forgotten :)

His historical fiction like the walking drum and supernatural (like the haunted mesa, with anasazi / hohokam living in what is more or less a parallel dimension) aren't half bad either.

The Walking Drum especially - he knew his medieval history that man, even the part that dealt with a small obscure kingdom on the west coast of India (where the princess in the walking drum comes from).

This is probably sacrilege, but I've never been able to get into L'Amour. I'd much rather read Pete Brandvold or Robert Randisi, or you, or a lot of other, more recent writers. I've tried half a dozen L'Amours and just never found one I liked.