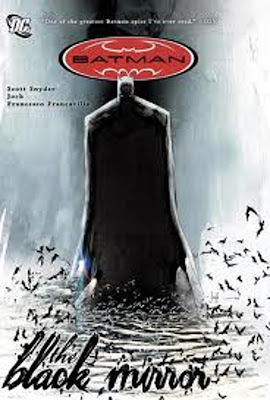 Scott Snyder, the creator and writer of the AMERICAN VAMPIRE series, has also been writing Batman stories for DETECTIVE COMICS in recent years. I recently read THE BLACK MIRROR, a collection of a year's worth of stories from Snyder's run on the Caped Crusader.

I'd gotten out of touch with the continuity in the DC universe (and still am, to a large extent), but this volume has a quick summary of what's been going on. Bruce Wayne has given up being Batman (what, again?) and left Gotham City. Dick Grayson, the original Robin, is now Batman. Tim Drake, one of the replacement Robins along the way, is now sort of grown up and is a character called the Red Robin. Bruce Wayne's son Damian, introduced in BATMAN AND SON, is now Robin. Luckily, the stories in this volume focus almost exclusively on Dick as Batman, so my confusion about the other two characters didn't really keep me from enjoying the four connected story arcs that make up the book.

The title story, "The Black Mirror", is actually the first one and concerns Batman's attempts to break a ring of black marketeers dealing in stolen supervillain technology and artifacts. Police Commissioner Jim Gordon takes center stage in the next arc, "Skeleton Cases", as his son James Jr. (I don't know where he came from, either, I wasn't aware that Barbara Gordon had a brother) returns to Gotham City. Problem is, James Jr. may well be a serial killer. "Hungry City" features the return of another new character from the past (if that makes sense), the daughter of the crime boss responsible for the murder of Dick Grayson's parents. She seems to have gone straight and become a very successful businesswoman, but is she really? A bizarre and almost impossible crime draws Batman into an investigation of her activities and naturally winds up with him almost getting killed a couple of times. Then the ongoing mystery of James Gordon Jr. comes to an end in "Skeleton Key", which also features the return of the greatest Batman villain, The Joker.

So, having read Batman comic books for more than fifty years, what do I think of this almost current version? Well, not bad. Snyder's scripts are pretty good, featuring some actual detective work on Batman's part, goofy touches reminiscent of classic Batman (a giant killer whale inside a bank lobby, for instance), an evocation of Gotham City as a gritty, noirish place, and a few nods to continuity and history. I wish I could say that I liked the artwork by Jock (Mark Simpson) and Francesco Francavilla in these stories, but I really don't. Francavilla's work is the stronger of the two, in my opinion, but to an old curmudgeon like me, the storytelling just isn't clear enough. Now, if you'd had Neal Adams or Jim Aparo illustrating these same stories, the way they did back in my day . . . (Yeah, yeah, that's a nice story, Grandpa.)

All in all, though, I found enough to like here that I'll probably read more of Snyder's Batman work. There are at least two more collections available.

Court of Owls is excellent. And, if you've got time and want to dig deeper into Snyder's thoughts on Batman, find the episodes with him on Kevin Smith's Fatman on Batman podcast. The entire run of the show is excellent, especially if you want to dive off the high dive with Batman. I got my SF book club to read Court of Owls (new 52 Batman 1-11 [I think]) and I'll be re-reading it this week.