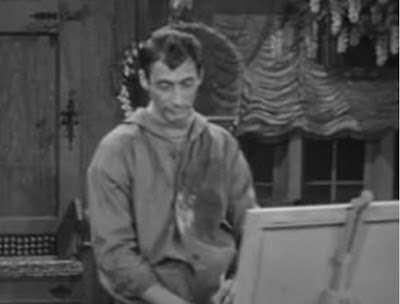 From time to time I'm going to spotlight some of the actors whose faces you might (or might not) recognize, but whose names you probably won't. It's a stretch even to call this first guy a character actor. He's a bit part actor, but he's notable, to me anyway, because he appeared dozens of times on one of the best sit-coms ever, THE DICK VAN DYKE SHOW. His name is Frank Adamo.

If you watch the series, you'll see that name in the closing credits from time to time, but that's hardly the whole story. Adamo wasn't a professional actor, or at least he didn't start out to be. He was Dick Van Dyke's assistant and stand-in, and when they needed an extra party guest or a guy standing in the background in a nightclub or somebody waiting in line somewhere, Adamo would step in. Most of those appearances were uncredited. Every now and then he got a small speaking part. He played a lot of waiters and delivery boys and ushers. He was the rather effeminate poet in the episode where Rob and Laura attend some literary soiree. I first became aware of him years ago when I was watching the series in syndicated reruns and realized the same guy kept popping up playing different parts.

Adamo went on to appear a few times on THE NEW DICK VAN DYKE SHOW and THE MARY TYLER MOORE SHOW, but his real claim to fame is all the times he showed up in New Rochelle and in the writers' office of "The Alan Brady Show". He was only a tiny part of a great series, but I always enjoyed his appearances.
Posted by James Reasoner at 6:00 AM

James, this is truly trivia-master's trivia. I thought I was pretty good for remembering that Jack (Jimmy Olson) Larson had a guest role in one episode as the nephew of gangster Sheldon Leonard, who forces Alan Brady to order Rob Petrie to write a skit for the would-be comic. But Frank Adamo, holy cow!!

I remember Sheldon Leonard as Big Max Calvada but had forgotten that Jack Larson played his nephew. Jeepers!

I'm familiar with Adamo. Try another one for me. This is fun.

And I did too. Once you realized he was there it was always fun to spot him. One of the best shows ever for wild originality.

There'll be another one coming up in a few weeks, Cap'n. But I suspect you'll know him, too.

My husband and I dubbed Frank Adamo as the"Where's Waldo" of the Dick van Dyke Show. Whenever he showed up in an episode we would say: there's Waldo!

Frank is my mothers first cousin. He later went on to be Mary Tyler Moore's personal assistant and friend. Frank also appeared in Bye Bye Birdie as Dicks stand in, and was also a chimney sweep in Mary Poppins and can be seen in episodes of the Mary Tyler Moore show in similar type roles.

I loved his appearance as a singing telegram delivery man in the first season episode "Punch Thy Neighbor".

Dan, you're absolutely right. I can see the Jimmy Olsen actor in the part, but it was the other Jack Larson, who doesn't seem to have done much TV otherwise.

I have known Frank since, well I was born 1959! He was my Grandmother Nettie Tiltons neighbor in Hollywood. His talents go way further than mentioned in other comments, a very talented man to say the least. To bad he isnt computer literate so he could see this. I am still in touch he resides in New Mexico and doing well. I know he would appreciate his fans.

Please tell him he definitely has fans! I love saying "there's Frank Adamo!" every time he appears. It's more fun in all the uncredited non-speaking appearances-- like The Dick Van Dyke Show version of Where's Waldo!
Glad to know he's alive and well!

Hello Anonymous..I have one up on you. I've known Frankie since I was born. Yes 1948 Laurelton Long Island NY.When I moved to LA I would see Frank and his mother Ann.He moved Ann to Scenic in Hollywood after Papa Frank died. DVD spoke at Anna's funeral.

I'm happy to see that this post has come to the attention of so many Frank Adamo fans and friends. I hope some of you who know him will pass along how much so many of us enjoyed his work.

Hello it me again.Anonymous from Feb 21 2015...living in the SFBay area.The last time I spoke with Frank he was in Florida(where his commitment to volunteering was paralleled). He was preparing for his move to NM. I called to tell him Mom had died. We have not communicated since.I would not be surprised if I had met Grandma Tiltons. Frank was very social and there was a open door policy with a drink in hand. I had my first cigarette on his balcony. He loved the sun and maintained a golden tan and "us" Irish sunburn. My friends were impressed that I knew someone on TV. That was a big deal in those days.They would keep there eye out for Waldo.I have fond memories of Frank and Ann. I'm pleased that he is up and about in NM and I'm sure he is tan as ever. He left a mark in the entertainment industry and in doing so his name will be forever
a part of its history.

I love seeing Frank Adamo in the Dick Van Dyke Show. Handsome, funny and talented, he has it ALL! Please, in July of 2016, if he is still alive, let him know he has a huge fan here in Binghamton, New York? He makes me smile everytime I see him. -Valeri Paxton-Steele

Frank Adamo was also Mary Tyler Moore's assistant on the MTM show. Thru out the MTM show you can see Frank Adamo in the background...at Mary's parties...etc. Frank was also in the funeral scene in the Chuckles the Clown Bites the Dust episode. He is the one closing the door when Mary enters. I too enjoy pointing him out when I see him in episodes. I'm sure he is heartbroken about Mary Tyler Moore's death.

Perhaps someone who knows Frank can ask him a trivial question regarding his acting days? In one episode of the DVD Show, there's a radio announcer with a theatrical voice -- "this is Henry Gordon Picard, the voice of New Rochelle." The part is uncredited, but imdb says its Frank Adamo. If it is indeed his voice, it really isn't obvious, and it demonstrates quite a talent for voice-over. Can anyone ask him if it's really he?

With a cold, and being snowed in, I've been binge-watching the original Dick Van Dyke Show on netflix. (My absolute favorite show which I loved as a kid.) I too started to notice the frequent appearance of the skinny, kind of nerdy-looking guy. Thank goodness I found him easily on imdb and then stumbled across your blog. Now that I've got a name to go with the character, I can start my own "Waldo" spotting.

I enjoyed reading everyone's comments on Frank Adamo's life and work and to learn that there are many fellow players of "Where's Adamo?" I hope Frank's fans are aware that pages 139-141 of Vince Waldron's book THE OFFICIAL DICK VAN DYKE SHOW BOOK discuss his background and friendship with Van Dyke.
Several of you mention imdb which lists some 50 DVD appearances for Frank. However, I have spotted about 17 more. Would like to hear if there are more. In addition to imdb's 50, I have these sightings:
6 Oh How we Met on the Night.... - USO audience
11 To Tell or Not to Tell- Guest
70 Who and Where was Antonio..... - Guest
80 Life & Love of Joe Coogan - Golfer
86 How to Spank a Star - Cameraman
92 My Husband's Other Life - Restaurant Patron
112 Stacey Petrie, part 2 - Coffee House Patron
114 Boy 1, Boy 2- Makeup man
129 Uhny Uftz - Commuter at train station
131 No Rice at my Wedding - USO Audience
137 Body & Sol - GI at second boxing match ( unconfirmed)
140 Fifty-two Forty-five or Work - Man at unemployment office
143 I choose not to Run - City Council meeting audience
148 Dear Sally Rogers - Stage hand (unconfirmed)
149 Buddy Sorrell.... - Man at Temple
156 Love Thy Other Neighbor - Restaurant Patron
158 The Gunslinger - One-eyed Fur Trapper seated near stage

The Jack Larson on an episode of The Dick Van Dyke Show was not the same Jack Larson who playedJimmie Olson on the Superman tv show.