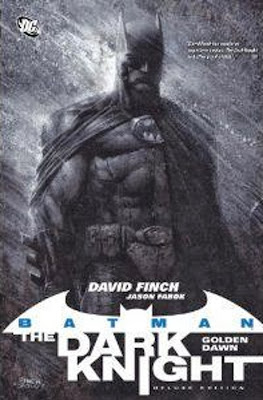 Batman has been my favorite DC Comics character since the great stories about him by Dennis O'Neil and Neal Adams some forty years ago. (Has it been that long? Really? Good Lord . . .)

No matter how much DC manages to alienate long-time fans like me with big "event" storylines and constant rebooting, somehow Batman manages to remain consistent. He's still recognizably the same character I read about all those years ago. One of the newer creators handling his adventures in recent years is David Finch, a writer/artist I hadn't heard of until I came across a collection called BATMAN: THE DARK KNIGHT: GOLDEN DAWN. This book reprints the first five issues of a new BATMAN: THE DARK KNIGHT series from 2010, plus a couple of stand-alone stories, and I have to say, it's a very pleasant surprise.

The main story in this one introduces Dawn Golden, a beautiful socialite who was friends with Bruce Wayne when they were both kids. Now she's grown up, she's been kidnapped, and Batman sets out to find her before something terrible happens. Several different classic Batman adversaries wind up playing a part in this one, along with one of Jack Kirby's later creations for DC, Etrigan the Demon. There's also a shadowy villain manipulating some of the action behind the scenes. The identity of this mastermind isn't revealed, which is a little frustrating but I can live with it. This story arc moves along very well, and I enjoyed it.

The two stand-alone stories include one written by Grant Morrison that sets up Morrison's "Batman, Incorporated" storyline. I'm not a big fan of Morrison's writing overall, although he's done some stories that I like a lot. The other story is a vignette set in the future about the ultimate fate of the Batman/Superman team. 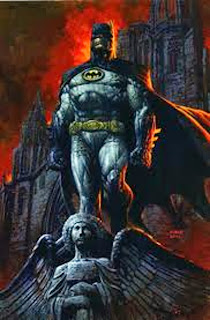 Finch's art is pretty good throughout. He draws an ominous-looking Batman, which is appropriate, and his version of Etrigan is a good one, too. His writing is very straightforward, not fancy at all, which is not a bad thing. Between this collection and the one authored by Scott Snyder that I read a couple of weeks ago, I'm actually starting to think about reading some of the Batman comics on a monthly basis again, something that I haven't done in many years.

I have to be honest, as good an artist as Finch is, his writing doesn't do much for me. Have you had a chance to read Grant Morrison's big epic run on Bats yet? Consistently weird and exciting, and a perfect coda for the character.

I'm afraid DC has completely alienated me with the New 52 junk.

Heath,
I think we're gonna have to agree to disagree on Morrison. I loved his WE3, but his superhero stuff generally doesn't work for me, for some reason that I can't pin down. I read the collected edition of THE RETURN OF BRUCE WAYNE and didn't care much for it. I started the collected edition of BATMAN INCORPORATED but didn't finish it. Today at the library I picked up a hardback of Tony Daniels' run on Batman and will be giving it a try.

Rick,
Will the new readers that DC picks up with its constant rebooting offset the long-time readers they run off? I dunno. They must think it'll work, and maybe it does, I don't research the sales numbers, but I've just never been fond of jettisoning years of continuity. 30 years ago Marv Wolfman told me that except for a very small percentage, comics readership turns over every two or three years, and that may still be true.

Morrison's Bat-finale, R.I.P., was fantastic. He tried to incorporate just about every era into one character's history. Fascinating. Scott Snyder's Court of Owls (i.e., Batman 1-11, new 52) is absolutely great. He adds something new to the Batman mythos. I haven't gotten to The Dark Knight yet, but will soon.

Others not so much: [crickets] Because I just didn't read them enough to comment.

Scott,
I've heard good things about Justice League and Aquaman. I'll probably try them out eventually. I started the collected edition of the first six or so issues of Morrison's ACTION COMICS and didn't like it. Might try Swamp Thing, too. I loved the original series by Len Wein and Berni Wrightson, some of my favorite comics of the Seventies. You might want to check out the trade paperback of that one. I liked the later run on Swamp Thing by Alan Moore, but it got a little too weird for an old curmudgeon like me.