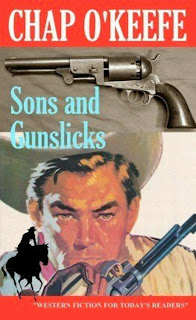 It was a wandering daughter job.

That's a classic set-up for hardboiled private eye fiction, and Chap O'Keefe's series character Joshua Dillard is nothing if not a hardboiled private eye in the Old West. In this novel, originally published in hardcover by Robert Hale in 2007 and recently released in an e-book version, freelance troubleshooter and range detective Dillard is hired by elderly former lawman and town tamer Jack Greatheart to find Greatheart's daughter Emily, who disappeared during a trip to Arizona. Emily was engaged to the son of a widow who owns a large ranch, and after her fiancée was killed in a gunfight before they could even get married, Emily journeyed to Arizona to meet and offer her condolences to the woman who would have been her mother-in-law. She never came back, and a bloodstained coat is the only clue to her disappearance. It's up to Joshua Dillard to find Emily if she's still alive or find out what happened to her if she's not.

Naturally, once Dillard arrives on the scene, things turn out to be even more complicated and mysterious than they appear on the surface. There's a range war brewing, and Dillard has to survive gunfights, fistfights, and bushwhackings before he's able to untangle the various strands of the plot and uncover the truth of Emily Greatheart's disappearance.

As usual, Chap O'Keefe (who's really veteran author and editor Keith Chapman, as most of you already know) spins this tale in terse, no-nonsense prose and skillfully throws in enough plot twists to keep things racing along to a powerful climax. Joshua Dillard is a fine character, a dogged investigator who's plenty tough when he needs to be, and his own tragic background adds a touch of poignancy to his adventures. I've probably said this before, but fifty years ago these books would have made good Gold Medal paperbacks or Double D hardbacks.

As an added bonus in this one, O'Keefe includes an informative essay about the links between Western and detective fiction. If you're a fan of those genres, SONS AND GUNSLICKS is well worth reading.

I've got this one. Just haven't had a chance to read it yet.

Love the Misfit Lil series but feel like she is left hanging. Who will get Pa's land? Will she ever get her man? Please write more.