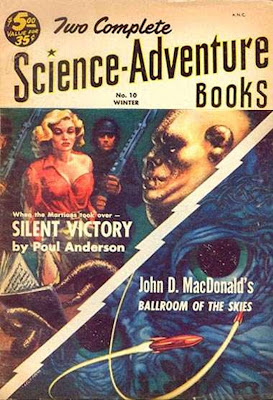 If you're going to have just two authors in your science-fiction pulp, you could certainly do worse than this duo: Poul Anderson and John D. MacDonald. As far as I can tell, this is the only appearance of the Anderson novella "Silent Victory". BALLROOM OF THE SKIES is a full-length novel, of course, originally published in hardback the previous year, 1952, and later reprinted in paperback a number of times. I read it as a Gold Medal paperback in the Sixties. Ought to read it again one of these days.
Posted by James Reasoner at 6:30 AM

This is maybe inspiration for Ace Doubles, only with one cover? I have read the McDonald but don't remember it other than a s a title and that I thought his Girl, Gold Watch and Everything was better sf.

"Silent Victory" was reprinted in the 80s in one of the Anderson collections from Tor I believe.

Bob,
I agree, THE GIRL, THE GOLD WATCH AND EVERYTHING is the best SF I've read from JDM. Oddly enough, I didn't really think of it as SF when I first read it, it was just another John D. MacDonald book.

Morgan,
Thanks for the info. I looked up the story on ISFDB and didn't see any other appearances listed, but that's as far as I took my research.

"Silent Victory" was renamed "War of Two Worlds" and reprinted in THE WORLDS OF POUL ANDERSON. An Ace paperback containing three short novels by Anderson.

Didn't you point that out yourself, James?

Hey, that was more than two years ago! I don't remember what I had for lunch yesterday.

Seriously, thanks for the heads-up, Keith. You're absolutely right.

I have 24 Poul Anderson books, but don't seem to have THE WORLDS OF POUL ANDERSON. How did I miss that one?

Some days, I can't remember if I even had lunch yesterday. The ISFDB was down, so I googled the title. Your post was one of the first things in the list.

I love to read , recently i found one not so well-known author that I think is quite good. His name is Richard Mann and I would recommend him to anyone who is interested in books.