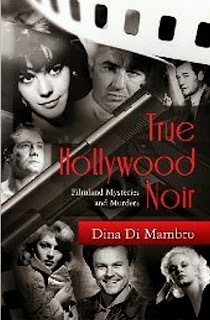 I've never been much of a reader of true crime books, but TRUE HOLLYWOOD NOIR: FILMLAND MYSTERIES AND MURDERS, a new release by journalist Dina Di Mambro, is just the sort of volume to attract my attention. Ever since I started helping Livia research her Lucas Hallam stories and novels, I've been interested in the early days of Hollywood, which certainly included their share of scandals.

Di Mambro starts with several of those, including the murders of William Desmond Taylor and Thelma Todd, along with the mysterious deaths of Thomas Ince and Paul Bern, Jean Harlow's husband (both of which may well have been murder, too).

She carries this theme up almost to the present day with chapters on the death of Johnny Stompanato that involved Lana Turner (a story I first encountered in a highly fictionalized version in one of Harold Robbins' novels, back in the days when I was reading a lot of Harold Robbins); the suspicious deaths of George Reeves and Gig Young; the lurid murder of Bob Crane; the drowning death of Natalie Wood; and the murder case involving Robert Blake and his con artist wife who wound up dead. Di Mambro does a fine job of presenting the facts in these cases and exploring the various theories about them in a fast-moving, entertaining style. I remember all the more recent ones, of course. As a big fan of the Superman TV show, I vividly recall hearing that George Reeves had died. Everybody I knew back then accepted the suicide theory. We were kids, what did we know? I'm convinced now that he was murdered, and that Thomas Ince was, too, to go back to one of the first chapters in the book.

The longest chapter and one of the most interesting is about the life and times of mobster Mickey Cohen, one of the most powerful and notorious figures in the West Coast underworld during the Forties and Fifties. I never knew much about Mickey Cohen other than his appearances, usually as a supporting character, in various movies and novels set in that era. Not long ago I saw the movie GANGSTER SQUAD, which apparently was almost all fiction. Di Mambro bases much of her chapter about Cohen on interviews she conducted with Jim Smith, one of Cohen's long-time associates. As you might expect under those circumstances, it's a fairly sympathetic portrayal but never becomes a complete whitewash of Cohen's criminal activities.

I'm in no position to know what's true and what's not about these cases, but as a reader I found TRUE HOLLYWOOD NOIR very entertaining. It does a good job of capturing both the glamour and the sordidness of Hollywood, and I found it hard to put down.

I don't believe there is any credible evidence that proves George Reeves was murdered, though it is certainly not out of the question.

You may well be right, Jeff. I'm far from an expert on the subject. It's more of a gut feeling with me, which may be that little kid inside me still wanting to think Superman wouldn't do that.

The book HOLLYWOOD KRYPTONITE provides about as much credible evidence as there is likely to be...which is considerable.

I love reading about Hollywood scandals from the 20s-60s. Hollywood Babylon is the most (in)famous of these kinds of books. Good to hear you latched on to a good one.

I love this stuff.